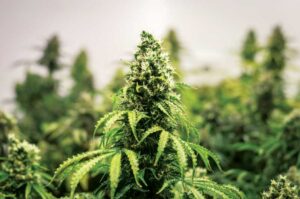 Medical marijuana for humans has been a hot topic for many years. Much of the controversy has focused on ethical and legal issues that aren’t directly answerable through scientific research. Participants in these debates often gravitate toward ideological extremes. For some, any use of marijuana—medical or recreational—is immoral and dangerous. For those at the other end of the spectrum, marijuana is a perfect, risk-free cure for anything from depression to cancer.

In the last several years, these debates have migrated to veterinary medicine, with both extremes well represented. During this time, it has grown easier and more common for animal owners to provide their pets with cannabis-based remedies, both marijuana itself and products specifically produced for companion animals.

As in human medicine, a great deal of the discussion about these remedies has focused on legal issues. Insufficient attention, however, is given to the critical scientific question, “What are the risks and benefits of medicinal use of cannabis-based products in veterinary patients?”

Any consideration of the medical use of cannabis should be based on rational, objective evaluation of the scientific evidence concerning risks and benefits, uninfluenced by the surrounding ethical and legal debates.

A lack of research

Cannabis sativa contains a bewildering variety of chemical compounds. Some have been shown to have significant effects on the body, including the central nervous system (CNS) and gastrointestinal (GI) tract. Therefore, there is good reason to believe cannabis-derived medicine could be beneficial, as well as pose risk, to veterinary patients.

Unfortunately, no reliable clinical research evidence exists for the use of cannabis-based remedies in small animal patients. None. That means we can’t state with confidence the benefits or risks of any such remedy. We can hypothesize, based on the pharmacology of cannabis compounds or on anecdotal evidence, and we can extrapolate from studies in lab animals or humans. However, there is neither direct nor reliable evidence to support any claim about any veterinary medical marijuana treatment.

You May Also Like  How do fresh food diets compare to their commercial cousins?

This lack of research is due primarily to strict laws regulating the availability of marijuana for research purposes, as well as medicinal or recreational use. Hopefully, more data will emerge as these laws change. For now, the best we can do is look at what we know about the risks of marijuana in veterinary species, as well as the risks and benefits identified in humans.

It is clear marijuana exposure can have toxic effects on dogs and cats.1-2 These can range from mild to severe, though exposure is rarely fatal. There also is evidence the greater availability of marijuana associated with legalization for human medical or recreational use can increase the incidence of marijuana toxicosis in pets.3 There is little information on the safety of cannabis-based medical products aimed at the veterinary market. A survey of owners using such products did report low rates of undesirable effects, as well as perceived benefits, but this is only anecdotal.4

There also is concern about the consistency and labelling accuracy of medical cannabis products. Jurisdictions allowing medical marijuana use in humans have standards for labelling and quality control testing. However, there is evidence that cannabis products frequently are inconsistent in composition and labelling despite these regulations.5-6 Given the complete absence of regulation or testing for veterinary cannabis-derived remedies, it is impossible to evaluate the consistency or labelling of these products, but they are likely to be at least as unreliable as products intended for human use.

In the absence of clinical research in veterinary patients, we must look to human medical research literature despite the obvious dangers of extrapolating across species. A recent comprehensive literature review produced by the National Academies of Science, Engineering, and Medicine (NASEM) in the United States evaluates the risks and benefits of cannabis-based therapies that have been studied and classifies them using a straightforward system.7 The strength of evidence is organized into five categories: no/insufficient, limited, moderate, substantial, or conclusive. Regarding the use of cannabis in animal patients, the review found the evidence is insufficient to draw a conclusion.

You May Also Like  Sneak peek: 5 Questions with the star of Arctic Vets

Many of the risks and benefits evaluated do not apply to veterinary patients, including dangers our patients will not face, such as impaired driving, and diseases they do not experience like atherosclerotic coronary artery disease.

Here are the conclusions of the review for conditions that might be relevant to our patients:

Risks: Cannabis use has been associated with increased risk of schizophrenia and other psychoses, along with some anxiety disorders in a dose-dependent relationship.

Cannabis has many active chemical compounds, and it’s likely some will have beneficial therapeutic effects. There is substantial evidence for only a couple of uses in humans, including pain and chemotherapy-induced nausea. There is no direct evidence for any use of cannabis in dogs and cats, though there is clear data for the toxicity of marijuana. All veterinary cannabis products are unregulated, and most have not been tested for safety or quality control, much less clinical benefits. Until further research is available, use of cannabis in dogs and cats is entirely experimental and based only on anecdote.

Dr. Brennen McKenzie holds a master’s degree in physiology and animal behaviour from the University of California, Santa Cruz. After attending the University of Pennsylvania School of Veterinary Medicine, he began working as a small animal general practice veterinarian and soon discovered evidence-based veterinary medicine. McKenzie has served as president of the Evidence-Based Veterinary Medicine Association (EBVMA) and reaches out to the public through his SkeptVet blog, his contributions to the Science-Based Medicine blog, and media interviews on veterinary medical topics. He earned his M.Sc. in epidemiology at the London School of Hygiene and Tropical Medicine, and is certified in medical acupuncture for veterinarians (MAV).