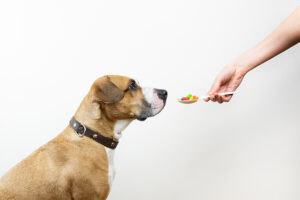 It has been said there are 10 times as many bacterial cells as human cells in the average human body.1 That’s what has been said, but it’s probably not true.2 Still, there is undoubtedly a large and complex ecology of micro-organisms living in and on every individual mammal, and this ecology has multi-faceted and important health effects.3 Micro-organisms produce important nutrients, influence immune function and digestion, and have other beneficial effects on health.3 Disruption of this ecosystem can have negative health effects, as anyone who has suffered from antibiotic-associated diarrhea can attest!

Our growing understanding of the importance of commensal micro-organisms has led to the hope we may be able to deliberately alter the microbial flora of healthy animals and veterinary patients to achieve targeted, beneficial health effects. Micro-organisms (e.g. bacteria or yeast) that are administered to prevent or treat disease are known as probiotics. A lucrative industry has emerged to produce and sell such organisms.

The problem of poor quality control in unregulated supplements also pertains to probiotics. Studies have shown the majority of veterinary probiotics sampled are mislabelled or do not contain the type and amount of micro-organism they are supposed to have.4-5 Even if particular organisms are useful for specific indications, it cannot be assumed other probiotic products will be effective in the same circumstances or that effects seen in clinical studies will translate across species or indications.

Probiotics have been recommended for a variety of clinical problems in veterinary species, including spontaneous and antibiotic-associated diarrhea, inflammatory bowel disease, viral upper respiratory infection, and renal failure. A handful of studies have been done looking at these and other uses, mostly in regard to indications for which there is some positive evidence in humans.6,7 The following are some common indications for which probiotics have been recommended, along with brief summaries of the available evidence.

Similarly, the limited research in horses is also mixed, with studies finding benefits, no effect, and even potential increases in diarrhea with use of probiotics.11,12

These studies also vary in the probiotic used, patient population, and methods.

Other studies show effects of probiotics on the gastrointestinal (GI) flora and the host in dogs with food-responsive enteropathy, idiopathic inflammatory bowel disease, and other chronic enteropathies.6 However, no definitive studies show improvement in long-term symptom control or other clinically important outcomes on dogs or cats with chronic GI disease.

As probiotics have various effects on the immune system, several studies have looked at the potential value of probiotic treatment in management of allergic dermatopathy.6,13,14 Once again, there are some encouraging results, but predictable, durable, clinically meaningful improvement in real-world use has not yet been shown.

A single pilot study has been reported evaluating probiotic use in cats with feline herpesvirus infection.15 The study was small; results were mixed and did not show a convincing beneficial effect. As with atopic dermatitis, additional research is warranted, but there isn’t much basis for clinical use at this point.

You May Also Like  Nutritional, dental startups partake in Purina program

Some preliminary studies in rats and pigs have suggested probiotics might reduce azotemia or otherwise benefit patients with chronic kidney disease (CKD).16 Uncontrolled observations in cats and dogs also have suggested similar effects, though the risk of bias in such studies is very high.16 At least one commercial probiotica has been marketed for this purpose and has been the subject of several studies.16-18 Though small and with typical limitations, these controlled studies have not found any convincing evidence of a meaningful impact of this probiotic on renal disease in dogs or cats.

Whenever there is limited research evidence, it is impossible to be certain of not only the efficacy, but also the safety of medical therapies. Both actual and theoretical risks from probiotics have been discussed in the human medical literature.19,20 Generally, probiotics are considered safe in immunocompetent humans, though not all the potential risks are well characterized.19,20

Some evidence of direct patient harm has been reported in veterinary species.11 There also are concerns about indirect risks, such as the transmission of antibiotic resistance genes from probiotic species to pathogenic organism. This led to the refusal of one regulatory agency, the European Food Safety Authority (EFSA), to approve the use of a commercial veterinary probiotic when the constituent organism was found to be resistant to clindamycin.21 Despite such concerns and the uncertainty of limited evidence, probiotics have been widely available and frequently used in research and clinical settings without many reports of obvious harm to veterinary patients.

You May Also Like  Osteoarthritis and dietary supplements: What should we be recommending?

Brennen McKenzie, MA, M.Sc., VMD, cVMA, discovered evidence-based veterinary medicine after attending the University of Pennsylvania School of Veterinary Medicine and working as a small animal general practice veterinarian. He has served as president of the Evidence-Based Veterinary Medicine Association and reaches out to the public through his SkeptVet blog, the Science-Based Medicine blog, and more. He is certified in medical acupuncture for veterinarians. Columnists’ opinions do not necessarily reflect those of Veterinary Practice News Canada.

Is immunotherapy the key to wiping out canine cancer?
Join Now!