Heartworm disease is an elusive diagnosis in feline patients. As such, a thorough understanding of the pathogenesis of feline heartworm disease (FHWD) is needed to interpret test results.

How heartworm disease differs in cats and dogs

Cats become infected with heartworms in much the same way as dogs. However, while cats are susceptible hosts, they differ significantly from dogs in the number of infective heartworm larvae that survive to adulthood.

Once the infective third-stage larvae (L3) enter the host animal, they molt to fourth-stage larvae (L4), migrate through tissues, molt a second time to an immature worm (fifth stage), and then penetrate a peripheral vein. They are carried by the circulation to and through the heart to the caudal pulmonary arteries where they continue to develop.

By 100 days postinfection, these immature worms are 2 inches long. The initial pulmonary artery pathology in the cat is similar to the dog in there is muscular hypertrophy, villous endarteritis, and a cellular infiltrate of the pulmonary parenchyma adjacent to the pulmonary arteries.

From this point (100 days) forward, major differences in the pathogenesis of disease develop between the cat and dog. In the latter, most of the worms continue to develop into adulthood and the familiar progression of canine heartworm disease unfolds. In the cat, a majority of immature worms die at three to four months postinfection. This results in an inflammatory reaction and development of the syndrome known as heartworm associated respiratory disease (HARD).1

Demonstrable histopathological lesions are evident even in those cats that clear the infection and are exactly the same as those found in cats with adult worms.

The most notable microscopic lesion is occlusive medial hypertrophy of the small pulmonary arterioles, but other changes are also noted in the bronchi, bronchioles, alveoli, and pulmonary arteries.2 Medial hypertrophy can also occur from toxocara and aelurostrongylus infections.3 Radiographic signs are similar to those of feline asthma or allergic bronchitis, which can result in missed diagnoses.

Many factors determine the number of infective larvae a cat or dog is exposed to, including available vectors, reservoirs of infection, and temperatures conducive for larvae to develop. Necropsy surveys of shelter cats have placed the prevalence of adult heartworm infections at five to 20 per cent of the rate seen in unprotected dogs in a given area.

However, it should be stressed heartworm infection and heartworm disease are two different entities, with the former referring to the presence of live worms within the host animal and the latter being the pathology resulting from ongoing or past infection.

A critical conclusion regarding HARD is while the damage caused by immature worms is not deadly, cats do not need to have adult heartworms present to develop significant pulmonary pathology. In a necropsy study that included histopathology of lungs, it was noted in a group of shelter cats without adult heartworms but were heartworm-antibody positive, 50 per cent of them had occlusive hypertrophy in 20 to 40 per cent of arterioles.

Experimental studies designed to mimic abbreviated heartworm infections reproduced these lesions in the pulmonary arterioles, and the lesions were still present eight months after the infection.

Laboratory studies have shown heating the sample test tube to 104 C (219 F) for 10 minutes will break these complexes down and release any antigen, resulting in more positive test results. Most reference labs now offer heat treatment as an option when antigen test results are in question.

A caveat: practitioners must be careful not to overinterpret a positive test on heat-treated samples, as it could indicate bound residual antigen from a worm that has recently died and is still in circulation. In other words, it does not necessarily mean live adult worms are present.10

In experimental studies, antibody tests initially detected 98 to 100 per cent of heartworm infections,11 but have failed to perform at the same level of accuracy in naturally infected cats in real-world settings. We have now found a significant number of cats with adult heartworms are negative to antibodies.

In a retrospective study of 50 heartworm-positive cats conducted at North Carolina State University, 14 per cent were false negatives, while a large majority of these cats (72 per cent) had clinical signs indicating active disease.12 Meanwhile, a necropsy study of shelter cats in Texas reported a 50 per cent false negative,13 while another necropsy study of shelter cats in Florida had an 11 to 68 per cent false negative14 on six different antibody tests. Twenty-one of 31 heartworm-positive cats were negative on at least one of eight antibody tests evaluated.15

Two separate studies have compared multiple antibody tests, antigen tests, and radiographs in an effort to diagnose feline heartworm disease. The first study was on client-owned cats that were presented with a primary complaint of coughing.6

The second study was on shelter cats who had necropsy-confirmed heartworm status and histopathology of lungs.10 Both studies concluded no one test proved to be definitive in diagnosing FHWD, an array of diagnostic tests increased the ability to make a diagnosis, and FHWD is far more prevalent than our current diagnostic abilities are able to detect.

When using antigen and antibody tests, veterinarians need to be aware of their shortcomings. It is difficult to get a diagnosis of feline heartworm disease using a single method unless screening reveals a positive antigen test or a finding of a worm on ultrasound. Most cases require performing multiple tests, and veterinarians should be prepared to run additional tests if antigen or antibody results do not support clinical suspicions. 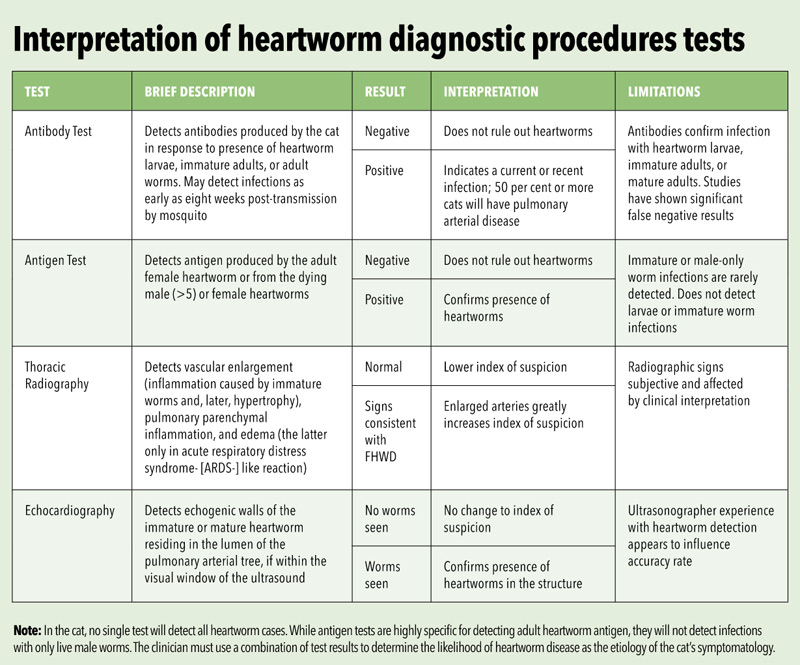