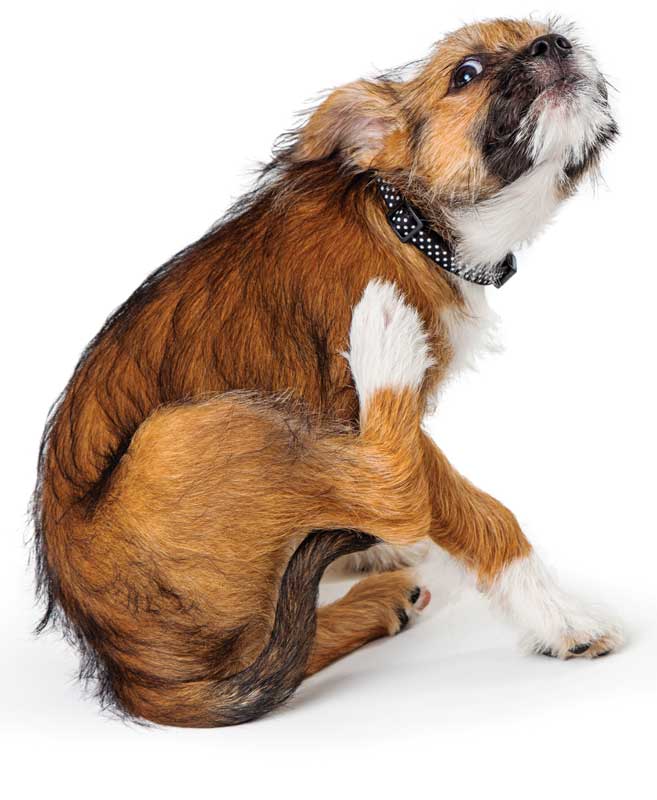 Scaling, hair loss, papules, pustules, and epidermal collarettes. All are clinical signs pointing toward canine pyoderma. The culprit may seem clear at first glance; however, veterinarians must look at the bigger picture to address the underlining issue.

It’s important to first understand the meaning of pyoderma, particularly regarding the depth of infection, says Elizabeth Layne, DVM, Dipl. ACVD, clinical instructor at the University of Wisconsin-Madison, School of Veterinary Medicine. The most common form of pyoderma is superficial bacterial folliculitis, a bacterial infection of the upper part of the hair follicle caused by Staphylococcus pseudintermedius.

Deep bacterial infections (presented as swelling, nodular lesions, and oozing draining tracts) can occur, but that is a different diagnostic and therapeutic approach, Dr. Layne adds.

Since pyoderma commonly masks another condition, a vicious treatment cycle can ensue if the underlining problem isn’t identified.

“Veterinarians often recognize the signs of infection and treat with antibiotics and/or topical disinfectants, but because the underlying skin or systemic abnormality isn’t addressed, the pyoderma returns when treatment is stopped,” Layne says. “Malassezia, the skin commensal yeast, can be problematic, along with Staph, so the yeast infection needs to be recognized and treated in addition to the bacterial infection.”

Cytology is the most important part of diagnosing pyoderma, according to Becky Valentine, DVM, Dipl. ACVD, of the VCA Calgary Animal Referral and Emergency Center in Calgary, Alta.

“Cytology is an easy and rapid diagnostic tool that is essential for the diagnosis of pyoderma,” Dr. Valentine says. “Once a diagnosis is made, appropriate antimicrobial therapy should be instituted. Investigation into why the patient developed pyoderma should be initiated.”

You May Also Like  Software features to watch in 2022

Topical therapies can come in various forms, such as sprays, mousses, or wipes containing disinfectants.

“There are a number of companies developing new topical treatments all the time, and usually they can provide some in vitro data on bacterial and yeast killing,” Layne says. “There are some studies on residual activity of shampoos, too, showing that dog hairs washed in certain shampoos continue to inhibit bacterial growth well after the shampoo has been rinsed away.”

The decision to administer topicals versus systemic antibiotics is a clinical judgment, Valentine says. Factors to consider are owner compliance, patient co-operation, and degree of infection and pruritus.

“It is very common to encounter bacteria that may be resistant to systemic antimicrobials,” says Michael Rossi, DVM, Dipl. ACVD, director of clinical studies at Coastal Veterinary Dermatology & Ear Clinic in Houston, Tex., and conference speaker for Ceva Animal Health. “It is for this reason we should not forget to couple systemic therapy with topical treatments. This may lessen the development of increased antibiotic resistance. There are several topical compounds, such as chlorhexidine, sodium hypochlorite, and phytosphingosine, that have demonstrated good efficacy against antimicrobial resistant bacteria.”

The pyoderma treatment playing field gets a bit muddled once antibiotic resistance takes the mound.

“The emergence of bacterial strains in veterinary medicine resistant to virtually all antimicrobials has complicated how we as practitioners manage pyoderma,” Dr. Rossi says. “Some of this has been realized though the transfer of traditional resistance genes, while more and more research is being focused on the microbe’s ability to produce an effective, mature biofilm.”

You May Also Like  When should you refuse to perform surgery?

Rossi says he always encourages practitioners to culture sooner rather than later, and use antimicrobials for appropriate strengths and lengths of time.

“The biggest risk factor for the development of antimicrobial resistance is the use of antibiotics in the preceding six to 12 months,” says Outerbridge, who notes up to 40 per cent of skin infections seen at U.C. Davis are caused by resistant strains of Staph.

Consider this scenario: A dog gets recurrent skin infections, but is not properly evaluated to determine the underlying reason for the infection. That dog, Outerbridge points out, is likely to receive repetitive courses of antibiotics. This, in turn, increases the risk of developing resistant skin infections.

“With the rise in methicillin-resistant Staphylococcus pseudintermedius and other resistant skin pathogens, it is imperative we all use good antimicrobial stewardship,” Valentine says. “This includes reaching for topical antimicrobial treatments whenever possible.”

When systemic antibiotics are chosen, practitioners should ensure the right antibiotic is administered at the right dose and duration, Valentine adds.

“Generally, the cephalosporins or clavulanic acid-amoxicillin are good first choices,” Layne says. “If those are not effective at an appropriate dose and duration of treatment, aerobic bacterial culture should be performed before guessing which antibiotic class might be effective for the patient.”

With the rise in antibiotic resistance, there has been renewed interest in Staphylococcal bacterins and in Staphylococcus aureus phage lysate treatments, according to Layne.

Staphylococcus aureus phage lysate is a vaccine indicated for the treatment of recurrent canine pyoderma and related Staphylococcal hypersensitivity, or polymicrobial skin infections with a Staphylococcal component.

The vaccine is not a primary treatment to eliminate the infection, but rather a treatment that prevents recurrence, according to David Ganfield, PhD, co-owner of Delmont Laboratories.

“[The vaccine] treats the immune system of the dog by way of skin injection,” says Dr. Ganfield, adding the product can be given at the same time as topical treatments or antibiotics.

You May Also Like  Coping with shockingly bad client behavior

The home-run message, according to field experts: First, be judicious in the use of oral antibiotics. And second, determine the underlying diseases predisposing to bacterial skin infections and treat those.

“If we can all reduce our use of systemic antimicrobials, we will be helping to take one step toward reducing the ever-increasing threat of resistant infections,” Valentine says.