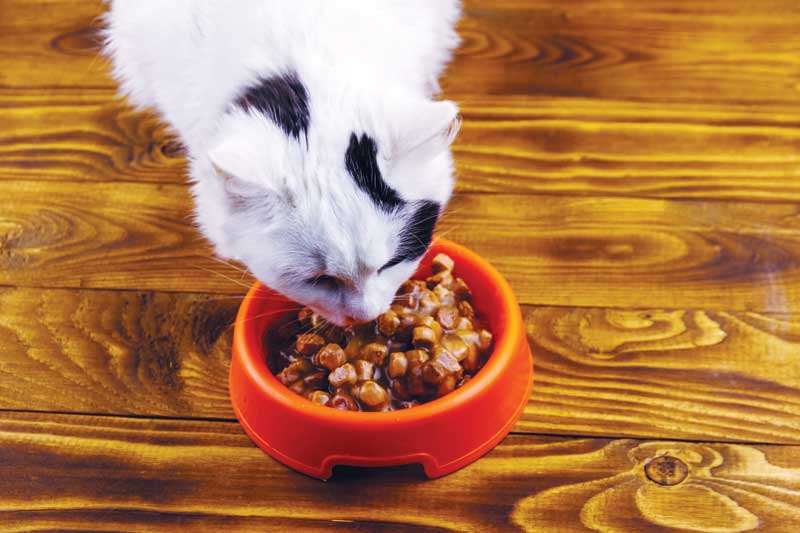 An improved understanding of the role of pH, magnesium, and phosphorus; greater knowledge of risk factors; and more dietary options have changed how struvite stones are treated in cats and dogs. While struvite uroliths may in some cases require surgical intervention, the recommended standard of care by the American College of Veterinary Internal Medicine (ACVIM) is medical dissolution with a therapeutic diet formulated to alter urine acidity and encourage water consumption.

Dietary dissolution of struvite stones is both effective and inexpensive. Therapeutic diets limit calculogenic compounds (e.g. phosphorus and magnesium) and acidify urine. That makes the urine a less welcoming environment for stone formation and dissolves stones that are present.

Concerns medical dissolution places pets at risk of urethral obstruction are not borne out by the literature, according to the ACVIM consensus statement, published in the Journal of Veterinary Internal Medicine (JVIM) in 2016.

Dietary management itself has changed as well. The shift from struvite-only dissolution or prevention diets to combination struvite dissolution/prevention and calcium oxalate prevention diets is the biggest change in management of these uroliths, says Cailin Heinze, VMD, Dipl. ACVN, assistant professor of nutrition at Cummings School of Veterinary Medicine at Tufts University.

Struvite uroliths occur in both dogs and cats, but have different causes. In dogs, struvite stones—the most common type seen—develop almost exclusively as a result of urinary tract infections (UTIs) caused by urease-producing bacteria. Female dogs are at greater risk, as they are more likely to develop UTIs. Breeds at higher risk include bichons frise, miniature schnauzers, Shih Tzu, and pekingese.

Cats, on the other hand, produce struvite metabolically, in the absence of a urinary tract infection.

A diet formulated to treat struvite urolithiasis won’t prevent recurrence in dogs, but according to ACVIM consensus recommendations, it may delay or minimize urolith burden if a UTI goes unrecognized. Once stones are dissolved, the goal is to prevent or treat future infections.

Cats may have predisposing factors to struvite stones, such as castration, obesity, and a sedentary lifestyle. Struvite urolithiasis is more common in females and in castrated males, says Bruce Kornreich, DVM, Dipl. ACVIM. The highest incidence appears to be in cats two to seven years old.

Dr. Kornreich notes owners of cats who develop struvite stones may need to control their pets’ weight through diet and exercise, in addition to feeding a struvite-prevention diet.

When cats develop struvite, risk of recurrence is reasonably high, Dr. Heinze says. “You presume that whatever led to it in the first place has not been resolved.”

For that reason, she says, cats with a history of struvite stones should stay on a therapeutic diet long-term. (The exception to dietary dissolution is cats with obstructive upper urinary tract uroliths, which should be removed through minimally invasive procedures.) As with dogs, struvite dissolution diets are inappropriate for kittens or pregnant or lactating female cats.

Once cats are eating the dissolution diet, re-radiograph them every two to four weeks, says Tony Buffington, DVM, PhD, Dipl. ACVN. Sterile struvite urocystoliths typically dissolve over a period of two to five weeks. Dr. Buffington recommends having owners continue feeding the diet for at least 30 days after uroliths are no longer visible radiographically.

For stone prevention, canned food is desirable because of its high moisture content.

“When you’re trying to dissolve or prevent any type of urinary stone, having very diluted urine is critical,” Heinze says. “Typically, if your goal is dissolution and you can afford to feed it to a larger dog or if a cat will eat it, canned therapeutic food is always going to be ideal. But if you need to dissolve struvite stones or you need to prevent them in a cat, you’re probably better with a dry struvite-prevention and dissolution diet than with a canned, non-therapeutic diet.”

Pets who normally drink plenty of water can do well on a dry struvite-prevention diet, though, or one moistened with water or broth. In Buffington’s experience, most cats prefer canned food to dry food with water added to it. Most dogs who eat dry food tolerate the addition of one cup of water to every cup of dry food.

Dissolution diets work best when no other foods are permitted. Switch the animal from the normal diet to a dissolution diet over a period of about a week. Cats tend to be more neophobic regarding therapeutic diets than dogs, but of course they are all individuals. Some take to the new diet with no reluctance. With dogs or cats, it’s best to start a new food when the pet is feeling good again, rather than immediately after surgery or illness.

Getting pets to eat struvite diets is less of a problem than in the past. With four canned and dry options for dogs and a similar number for cats, it’s easier to find one a pet will like, Heinze says.

“I would say the biggest issue tends to be if they have other health problems,” she adds.

For instance, some stone-prevention diets are high in sodium. That encourages pets to drink more water and dilute the urine, but it makes these diets inappropriate for animals with congestive heart failure, high blood pressure, chronic kidney disease, or other conditions sensitive to sodium. In those cases, check labels carefully to make sure you are recommending a lower sodium option.

To move animals onto the new food, Buffington recommends offering half the daily ration of the familiar food and half as the new food in separate containers at mealtime, if owners feed once a day. Over several days, owners can gradually reduce the amount of the familiar food and increase the amount of the struvite diet. Flavouring food with chicken broth can help to draw the pet’s interest.

If animals refuse to eat a therapeutic diet, be familiar with some of the supermarket brands that may offer similar if incomplete benefits.

“There have been cases I’m aware of where cats won’t eat the [therapeutic] diet, but might eat these sorts of urinary tract diets from a supermarket,” Kornreich says. “If you can’t decrease magnesium content tremendously, it makes sense to lower it as much as you can. Same with pH effect and same with phosphorus concentration.”

“The struvite-calcium oxalate combination diets are designed to meet maintenance nutrient requirements, but that doesn’t mean they’re ideal if you didn’t need one,” Heinze says.

Due to their extreme reductions in nutrients (e.g. protein, magnesium, and phosphorus), diets designed for struvite prevention are for short-term use only. If clients are feeding one of these foods, follow up closely to make sure they don’t keep the pet on it.

“I had owners come in that were feeding one of the strict struvite-only dissolution diets for a year,” Heinze says. “The diet is very, very low in protein, and that dog actually had low blood proteins, likely because of dietary deficiency.”

The exception to short-term use of struvite-prevention diets in dogs is when a dog may have abnormal perineal conformation or is otherwise predisposed to urinary tract infections, Heinze says. For dogs with recurring infections from urease-producing bacteria, feeding a nutritionally balanced therapeutic diet over the long term may provide some reduction of stone risk.

Owners often want to know if other pets in the household can eat the same food. The answer is maybe.

“You’re probably fine to put another pet in the household that doesn’t have a history of stones on one of those struvite-oxalate combo diets, as long as they don’t have any other health issues,” Heinze says.