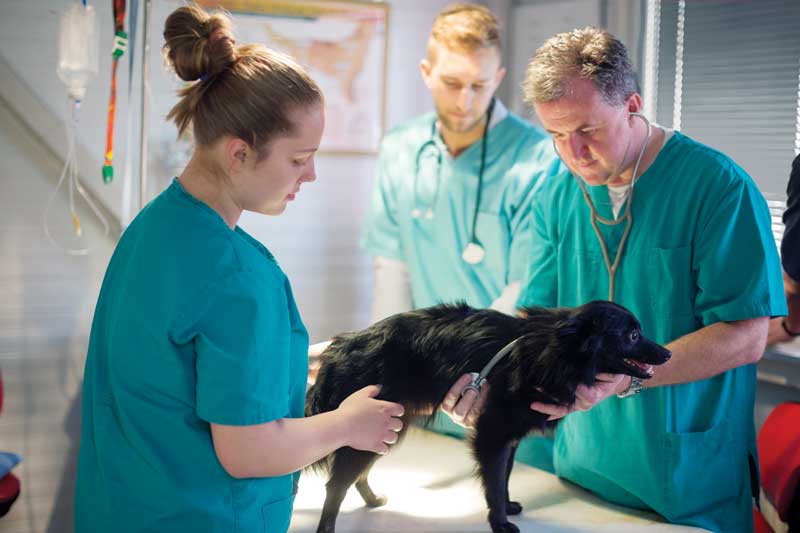 Congestive heart failure (CHF) is described by medical professionals as more of a syndrome than a disease. Yet, when pet owners are often attuned to ‘disease,’ how can veterinarians best convey what CHF really is to their clients?

“Congestive heart failure can result from a variety of different types of underlying heart disease,” says Emily Karlin, DVM, Dipl. (cardiology), clinical instructor at Cummings School of Veterinary Medicine at Tufts University. “When we say CHF, we generally are referring to fluid build up somewhere it should not be, as a result of heart dysfunction. We can see left-sided CHF (fluid build up in the lungs—pulmonary edema), resulting in cough or trouble breathing, or right-sided CHF (fluid buildup in the abdomen or around the lungs—ascites or pleural effusion), resulting in abdominal distension or trouble breathing. Basically, CHF is a potential outcome of having heart disease.”

When it comes to differentiating CHF from heart disease, paying attention to clinical signs and symptoms is key.

“Asymptomatic, or occult, heart disease is often detected based on physical exam abnormalities—such as a heart murmur, cardiac gallop, or arrhythmia—or sometimes by echocardiographic screening, but the animal is feeling well at home with no clinical signs,” Dr. Karlin says. “CHF typically results in clinical signs, such as cough, trouble breathing, exercise intolerance, or collapse. Heart disease also can result in other clinical signs, such as weakness or collapse, which can either be related to CHF or other manifestations of heart disease like arrhythmia.”

Veterinarians, however, need to be aware certain conditions may mask CHF or, on the opposite spectrum, may cause them to incorrectly believe symptoms point to CHF.

“Congestive heart failure and respiratory disease often mimic each other, making it difficult to differentiate the two in a patient with respiratory signs (elevated respiratory rate or difficulty breathing),” says Ashley Saunders, DVM, Dipl. ACVIM (cardiology), professor of cardiology at the College of Veterinary Medicine & Biomedical Sciences, Texas A&M University. “There are features that can help differentiate. For instance, a chronic, harsh cough; absence of a heart murmur; and history of a good appetite and activity level would be more consistent with a non-cardiac cause of respiratory signs. Congestive heart failure is more likely in patients with a murmur, arrhythmia, tachycardia, heart enlargement, and respiratory signs.”

You May Also Like  Asymptomatic bacteriuria—To treat or not to treat?

Kittleson sees this type of mix-up on a regular basis.

While chronic bronchitis and pulmonary edema both cause a dog to cough, only pulmonary edema results in an increase in respiratory rate, according to Kittleson. It can also cause dyspnea.

A pet’s age and breed also should be considered.

Primary care veterinarians don’t need to go about this on their own.

“Establishing a relationship with a specialist is beneficial to the client and pet,” Dr. Saunders says. “Partnering together can give them access to the most comprehensive care.”

While there is no cure for CHF, it can be managed with medical therapy to provide the patient a good quality of life, according to Saunders.

“Congestive heart failure is typically managed with medications, such as diuretics, pimobendan, and angiotensin-converting enzyme (ACE) inhibitors,” Karlin says. “Research is being done on other interventions, such as stem cell therapy and micro RNAs.”

“There are ongoing trials for dogs with dilated cardiomyopathy and certain dogs with degenerative mitral valve disease, and new trials are on the horizon for Boxer dogs and for dogs taking medications that might negatively affect the heart, such as doxorubicin,” Karlin explains.

As for further down the road?

“New medications are continuously being developed in the field of human cardiology, and many of these become applicable to our veterinary patients,” she says. “The theoretical ideal treatment of CHF is to correct the underlying heart disease that has caused CHF.”

You May Also Like  Funding promotes, supports foster care during pandemic

Kittleson would like to see a device that can be put in the heart of a small dog that stops or, at least, reduces the amount of mitral regurgitation.

“These devices exist in human medicine, but they are much too large to work in small dogs currently,” he says. “Investigators at Colorado State are working on this problem.”