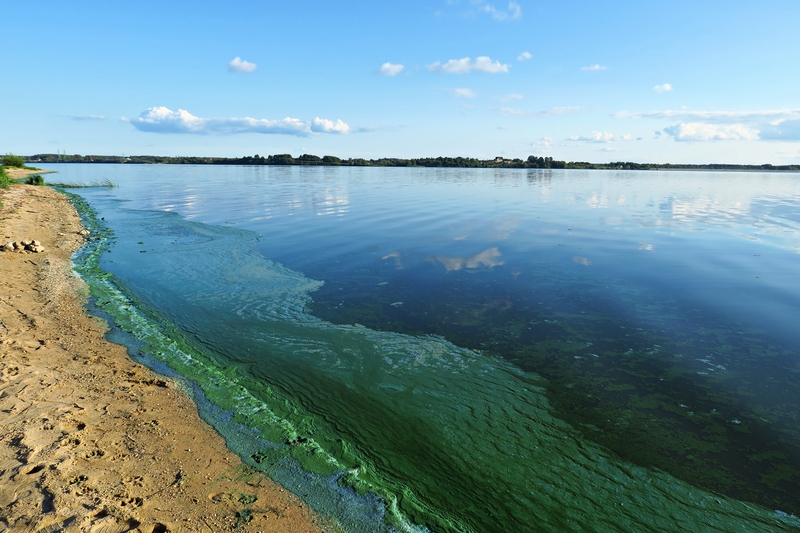 Dogs love to explore. No doubt about it, their snouts lead them into all sorts of places when they are out for a walk, including the picturesque pond or lake that happens to be a regular stop on its daily jaunt. A quick drink and it’s on its way. To many pet owners, however, the colour of the water may not have been noticeable or noteworthy, which is where the danger lies.

The onset of warm weather increases the threat of blue-green algae poisoning in people, pets, and livestock that swim in or drink from affected water. Although commonly referred to as blue-green “algae,” these organisms are not plants. Rather, they are bacteria—cyanobacteria, to be precise. So named for their bluish pigment, cyanobacteria are aquatic and photosynthetic, meaning they live in water and manufacture their own food.

An overgrowth of cyanobacteria is referred to as a “bloom,” which can occur in bodies of fresh, brackish, or saltwater. Blooms typically colour the water green (brilliant green, pea soup green, or iridescent), but some species of cyanobacteria produce colours such as orange/red or yellow/brown. These blooms have also been described as “paint floating on the water.” In addition to changing the colour of the water, blooms may also result in a foul odour and/or an abnormal taste. Bacterial colonies can float on the surface and, on windy days, may be blown into concentrated algal mats along the shore where livestock or pets can easily reach them.

Most cyanobacteria blooms are nontoxic and, of the 2,000-plus cyanobacteria species, only 80 produce toxins. Toxigenic blue-green algae blooms can occur throughout the year but are more likely to happen during hot summer and early fall days when water temperature rises, water becomes stagnant, and there is little rainfall. Eutrophic or hypereutrophic water (abnormally elevated phosphorus and nitrogen levels) encourages blooms. This most typically occurs in areas of agricultural or municipal runoff of animal waste and fertilizer. It is impossible to determine whether or not a bloom contains toxins simply by looking with the naked eye. Therefore, all blue-green algae blooms should be considered toxic until proven otherwise. Species of blue-green algae known to be toxigenic include Anabena, Aphanizomenon, Lyngbya, Microcystis, Oscillatoria, and Planktothrix.

All animals, including dogs, cats, horses, livestock, mammalian and avian wildlife, and humans, are susceptible to the toxins produced by cyanobacteria. Unfortunately, the toxic dose can be very small. In cases of highly concentrated algae, just a few mouthfuls of contaminated water may result in death. Absorption across the respiratory tract and skin may also result in exposure, although these are not primary routes.

Dogs, especially water-loving dogs that hunt or swim, are the most common domestic species affected. Cats are seldom affected, presumably because they rarely swim and are less likely to drink water that is not fresh. Common sources of poisoning for domestic animals include backyard ponds and stagnant water holes, as well as lakes and slow-moving streams. Poisoned grazing animals drinking from these affected water sources may be found dead near the shore. Cases of poisoning in dogs from water in small containers, such as discarded aquariums and neglected backyard fountains, have been reported.1

A closer look at toxigenic blooms
The most common and concerning toxins produced by cyanobacteria are microcystins and nodularins—which are potent hepatotoxins—and anatoxins (anatoxin-a and anatoxin-as), which are powerful neurotoxins.

Microcystins and nodularins (hepatotoxins): Animals ingesting these toxins typically become ill, often within 30 minutes after access to affected water. Early signs include anorexia, lethargy, vomiting, diarrhea, and weakness. Ingestion of microcystins often lead to rapid onset of shock secondary to intrahepatic hemorrhage and death; nodularins may not cause death for one to five days following exposure. Some animals develop restlessness, recumbency, and seizures prior to death. Laboratory abnormalities including hyperkalemia and hypoglycemia; increases in bilirubin and liver enzymes are common in those animals that survive for a few hours. Long-term hepatic issues, including secondary photosensitization, and renal failure may develop in animals that survive acute poisoning. These hepatotoxins can destroy the cytoskeletal structure of the liver to the point where hepatocytes transported by the portal vein can be found in the lungs at postmortem.

Anatoxins (neurotoxins): Anatoxin-a acts as a nicotinic agonist, resulting in a rapid onset neuromuscular blockade. In a matter of minutes, the animal can experience muscle rigidity, anxiety, tremors, seizures, paralysis, and respiratory failure. Death can occur within minutes to hours following exposure. A golden retriever succumbed to anatoxin-a poisoning near Reno, Nev., in early June 2010.2 The dog had been swimming in a manmade backyard pond and also ingested algae from a bucket used to collect water out of the same pond. Within an hour of ingesting algae from the bucket, the dog developed hypersalivation and anxiety, and presented to the hospital with ataxia, rear limb paraparesis, and muscle fasciculations. Over the course of two hours, the dog developed acute central nervous system (CNS) depression, tensor rigidity, absent menace and pupillary light reflexes, respiratory failure, and was euthanized due to poor prognosis. High concentrations of anatoxin-a were detected in the pond water, in the bucket the dog had drank from, its stomach contents, urine, and bile. In similar cases, three of three dogs developed seizures and died after swimming in a river in California, and three out of 11 dogs died within one hour of swimming in a natural pond in Ontario.3 As with the Nevada case, all dogs had high concentrations of anatoxin-a in their stomach contents at necropsy.

Exposure to anatoxins-as (“s” for salivation) results in rapid onset muscarinic signs such as salivation, lacrimation, excess urination, and diarrhea (SLUD), which are the same muscarinic signs seen with poisoning from organophosphate pesticides. Animals may die within 30 minutes of exposure. No significant laboratory abnormalities are associated with anatoxin toxicosis.

Poor prognosis
There is no specific treatment for poisoning from cyanobacteria. The rapid onset of clinical signs precludes most attempts. Once the signs of poisoning have developed, the prognosis is very poor. In severe cases, it is not uncommon to have the pet die while being transported to the hospital. Asymptomatic animals with very recent exposures should have emesis induced, provided it is safe and appropriate to do so. The instruction to induce emesis should only be given by an animal poison control center or veterinarian to avoid further harm to the patient. Animals should also be bathed to prevent additional ingestion from self-grooming. The use of activated charcoal has questionable effect in adsorbing the toxins, but cholestyramine was recently used successfully in a dog surviving the initial insult.4 Due to the potent anticholinergic signs caused by poisoning with anatoxin-as, atropine may be helpful. Further treatment is supportive and may include intravenous crystalloids or colloids for shock, blood products as needed for hemorrhage or coagulation deficits, anticonvulsants (diazepam, phenobarbital), methocarbamol for tremors, phytonadione (vitamin K1) for coagulation abnormalities, and hepatoprotectants such as silymarin and S-adenosyl-L-methionine (SAMe).

It is critical for veterinary staff to know blue-green algae can also be toxic to people. Individuals handling affected animals need to take special safety precautions to prevent respiratory irritation, contact dermatitis, or death. Protective clothing, including safety suits or aprons, long gloves, and eye protection, should be worn and good ventilation provided.
Consultation with veterinarians at animal poison control centers is recommended to provide current treatment options and assist with case management. Likewise, consultation with veterinary diagnostic laboratories is recommended for confirmatory testing. Water samples, or algal samples from the animal’s fur or gastric contents, should be refrigerated (not frozen) and preserved in 10 per cent formalin. Biologic samples such as serum, urine, or whole tissue samples from necropsied animals should also be submitted. If testing is positive, it is crucial local municipalities are informed so that appropriate public health measures can be instituted.

You May Also Like  Finding teeth hidden in plain sight

Lynn R. Hovda, RPh, DVM, MS, DACVIM, is the director of veterinary medicine and a founding partner at Pet Poison Helpline, a 24-7 animal poison control service available to both pet owners and veterinary professionals who require assistance with treating a potentially poisoned pet. Having managed more than one million cases, the veterinary experts at Pet Poison Helpline provide treatment advice for all species. For more information, visit petpoisonhelpline.com.

Progress in reclaiming a profession in crisis
Join Now!
4