Diseases such as rabies and distemper have been held in check but could roar back if the anti-vaccination movement making headlines in human medicine emerges on the animal side, the American Veterinary Medical Association is warning.

The Schaumburg, Ill., organization last week issued a statement about vaccinations and how the failure to immunize a growing number of children has led to a measles outbreak in the United States.

AVMA noted that the domestic dog variant of rabies has been eliminated in the United States because of widespread vaccinations and that diseases such as distemper, parvovirus, and panleukopenia aren’t prevalent anymore.

“This trend could easily be reversed, however, by the same circumstances that are allowing measles to spread in the United States,” AVMA reported.

The rabies vaccine in animals also reduces the chance of people contracting the deadly disease.

“Unvaccinated pets are not only at risk themselves, but pose a threat to other animals, including young pets that have not yet received their full series of vaccines and thus are not fully protected, or those individuals that can’t be vaccinated due to pre-existing health issues,” said AVMA President Ted Cohn, DVM.

“Vaccinating your pets helps to keep them safe from serious preventable diseases, while also protecting the health and well-being of these vulnerable populations.”

“Such adverse responses can vary from mild to severe, but most of these vaccine responses—such as fever, sluggishness and reduced appetite—are rare, mild and resolve quickly,” the organization stated. “For the majority of pets, the benefits of vaccination far outweigh the risks.”

Pet owners concerned about vaccinations should consult with their veterinarian, AVMA advised.

“While there are certain core vaccines recommended for all dogs and cats, and some that may be required by law, there are other vaccines that may or may not be necessary due to the pet’s age, health and lifestyle,” AVMA stated. 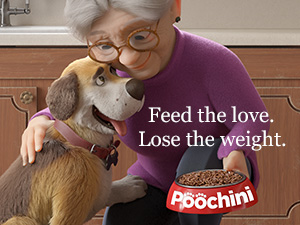 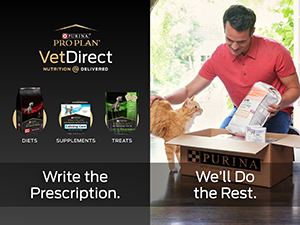 Purina® Pro Plan® Vet Direct takes the hassle out of pet food home delivery, offering convenience and support to both your clinic and your clients.
+ LEARN MORE
We use cookies on our website to give you the most relevant experience by remembering your preferences and repeat visits. By clicking “Accept All”, you consent to the use of ALL the cookies. However, you may visit "Cookie Settings" to provide a controlled consent.
Cookie SettingsAccept All
Manage consent