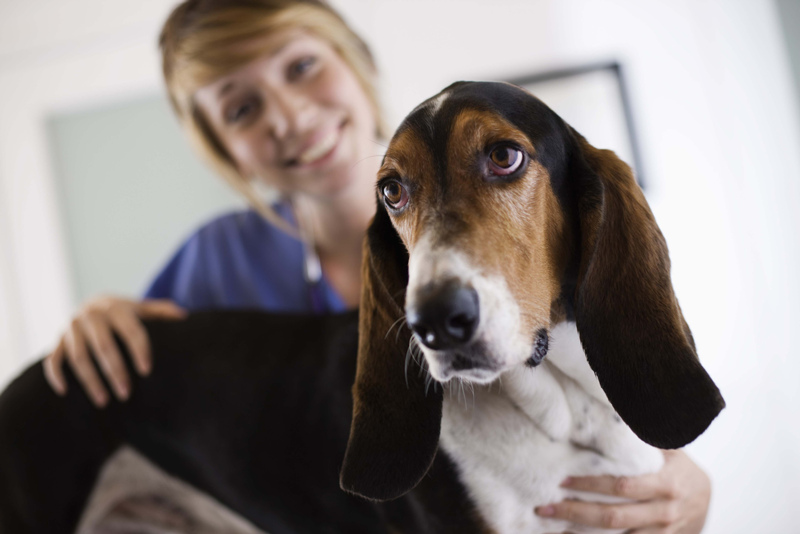 My childhood cat, Tom Kitten, was generally a nice guy. He considered himself my home tutor (evidenced by his tendency to sit on textbooks) and happily cuddled on the couch with me in the evenings. That’s what we told everyone at the veterinarian’s office where he was unwillingly examined each year. Despite his wailing, growling, and flailing, the (wisely) leather-gloved veterinary technicians patiently soothed him through the process every summer.

Anyone who’s taken their pet to a veterinarian knows that the job of caring for Fido or Fluffy is more than a one-person operation. It’s easy to imagine that (when dealing with more docile patients than Tom Kitten) the task of greeting animals and helping heal them must be very rewarding.

And indeed, many veterinary technicians say the opportunity to help animals and their humans is an excellent, if demanding, vocation. If you’re interested in becoming a veterinary technician yourself though, navigating the various exams, acronyms, and training programs can seem like a full-time job in itself.

Veterinary technicians have undergone at least a two-year associate’s degree program covering a range of topics relating to veterinary science and covering all species. Veterinary technologists are those who have completed a four-year bachelor’s degree program. Both technicians and technologists are required to pass the same state examination to be licensed to work in their state.

Technicians and technologists are permitted to take a more active role in patient care than veterinary assistants, especially for small animals.

“There’s a lot of states, and kind of rightly so, that are trying to clamp down on people who call themselves ‘technicians’ who actually have not gone through a program or who have not sat for the exam,” said Deb Reeder, RVT, VTS-EVN, and executive director of the American Association of Equine Veterinary Technicians/Academy of Equine Veterinary Nursing Technicians.

Reeder stressed that veterinary assistants are a critical component of any practice, however, and usually receive on-the-job training and expertise.

You May Also Like  Ten tools every superachiever needs

“There’s no one, nationally accepted title unless you wanted to call it ‘credentialed veterinary technician,’ but that’s not an accepted abbreviation,” Reeder said. “Every state has their own rules and regulations regarding what vet techs can do. There is no national rule or law.”

No matter what they’re called or how many years they’ve studied, a veterinary technician’s job goes well beyond wrestling uncooperative tabbies for a temperature check. Technicians are both deeply involved in a patient’s care (helping run anesthesia during surgery, drawing blood, processing radiographs) and in the communication within an animal’s medical team. Much like many human nurses, vet techs have to have the knowledge and skills to do anything from keeping patients comfortable to helping veterinarians save their lives. They may also have significant face time with clients, keeping them informed on an animal’s progress.

“It’s important, I think, for people to know that, just like [with veterinarians], oftentimes I think the general public thinks it’s mostly about petting puppies and kittens and that may be the initial pull for people because they enjoy that animal interaction,” said Dr. Christina Tran, DVM, Director of the Veterinary Technology Program at Purdue University’s College of Veterinary Medicine. “But really, the vet profession at large is based in math and science, and understanding why things are the way they are. It’s important for people to realize this is a profession that is very rigorous and requires the ability to kind of be a jack-of-all-trades.

Vet techs, according to Tran, “… run the show in a lot of ways.”

What makes a good veterinary technician? Tran believes personal qualities have more to do with a vet tech student’s long-term success as academic strengths.

You May Also Like  Courageous conversations: Respond, don’t react

The most important is self-awareness. Students who do best in Tran’s program are often very strong in the sciences, but she has seen plenty complete the degree program successfully without being Nobel Prize-level chemists. The key is for prospective veterinary technicians to know which areas of their chosen college program will be the most challenging and to develop study strategies to help themselves combat those challenges. Reaching out to professors can also make a difference — as long as it’s done before the student takes their first exam.

“It seems like the students that are very successful in life are the ones that have what they call grit,” Tran said. “The ones that can persevere, the ones that have that passion, that inner fire that then translates into achieving whatever their long-term goals are. They may encounter roadblocks along the way, but that doesn’t stop them from their end goal.”

Besides grit, successful veterinary technicians are good at communication, teamwork, and problem-solving on their feet. They’re also naturally curious people with a drive to continue their education even after they graduate.

The American Veterinary Medical Association recognizes 225 veterinary technician programs at various higher education institutions in the United States. Most of those are two-year associate’s degree programs; 22 programs also offer a four-year bachelor’s degree, and of those, three are tied in with vet schools at Purdue, Mississippi State and Missouri State.

The type of college program a prospective veterinary technician goes through depends partly on where they live — Alaska, Montana, and Washington D.C. do not have programs available to residents.

At schools with four-year programs like the one at Purdue, the program population looks a lot like the general college population. Tran said most of her students are first-time college students who have graduated from high school, with a few transfers.

Community colleges see a mix of traditional and non-traditional students. There are online programs for veterinary technicians, too, which are a great fit for students with full-time work or families.

Reeder said the vast majority of technicians graduated with two-year degrees; states do not recognize a difference between associate’s and bachelor’s degree holders in terms of certification, so for many students, the two-year program is too cost-effective to pass up.

The resources available to a technician student can vary drastically between universities, however. A four-year program like the one at Purdue, which is tied into the veterinarian program, tends to have its own population of animals to practice basic skills on and could give students access to a teaching hospital.

“What’s unique about those three schools is that right now they’re the only ones that have clinical instruction going on where the DVM and the vet techs do stuff together,” Tran said. “They’re rotating through a hospital environment together, which is great because then it really promotes the healthcare team. So they learn how to communicate with one another and how to work with one another very early in their careers.”

Purdue’s four-year program puts students through their paces in the general sciences for their first two semesters with the idea of laying a solid foundation for the more specific veterinary sciences that come later. Other two-year programs sometimes cut to the chase, beginning vet science courses a little earlier. The same goes for species specialization — Purdue’s program does not offer this option, but some other institutions do offer classes in later semesters on small animal or large animal-specific care.

The other trade-off with some distance learning programs is that students might be expected to find their own opportunities for hands-on experience. Many community colleges (and even some vet schools) partner with local private veterinary practices to get students in with patients, but making those connections without established partnerships can sometimes be tricky.

What happens after you get the degree? Look for Part 2 of our veterinary technician series soon!