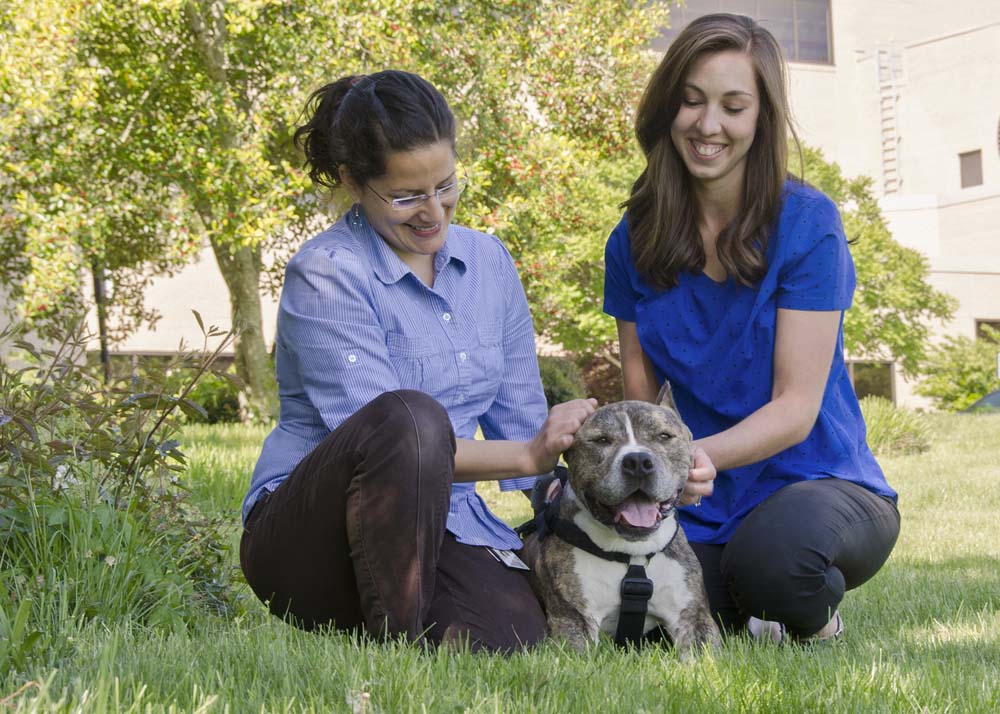 A 13-year-old pit bull named Dirty is back on his feet thanks to the veterinary staff at Mississippi State University College of Veterinary Medicine. Dirty had been diagnosed with Wobbler’s syndrome, a neurological condition that can lead to unsteady gait, and with progression, can result in not being able to walk, according to Andy Shores, DVM, Ph.D., Dipl. ACVIM, head of neurology/neurosurgery at the MSU College of Veterinary Medicine.

A month before arriving at MSU, Dirty had begun walking unsteadily. Soon, he was falling over and unable to stand, according to MSU. His owners, residents of Alexandria, La., took him to their local veterinarian, who then referred them to the Louisiana State University School of Veterinary Medicine.

Since LSU didn’t perform the surgery needed to correct the problem, Dirty’s owners, John and Paula Cormane, were referred to MSU.

“Dirty’s condition was pretty severe with chronic changes,” Dr. Shores said. “We took pressure off his spinal cord over the span of three of his cervical vertebrae during the two-and-a-half hour surgery to give him relief.”

The surgery was the first step in getting Dirty back on his feet, according to MSU. The next step was a lengthy rehabilitation program. Maria Perez-Hernandez, DVM, neurology/neurosurgery veterinary resident, met with Dirty three weeks after his surgery. Her role was to monitor and adjust his physical therapy, oversee his medications and prevent complications from his immobility.

“This was a team effort from the start,” said Dr. Perez-Hernandez, who is also certified in small animal rehabilitation. “Dr. Simon Kornberg, also a resident, was primarily involved in the surgery and got Dirty started in his recovery, and then I worked closely with the students and the rehabilitation service to make sure he was getting the best quality of care.”

In addition to the surgical recovery, Dirty was dealing with severe arthritis in his front limbs. Perez-Hernandez saw Dirty almost daily and even worked on weekends to get him rehabilitated.

“We made sure he was really comfortable in his environment and that he was getting proper nutrition,” Perez-Hernandez said. “It was clear after his surgery that he was a little depressed. We encouraged him through lots of interaction with the students and clinicians on the case.”

As part of the rehabilitation regimen, the team worked with Dirty in an infinity pool as well as an aquatic treadmill. A few months into his treatment, Dirty started to move his legs.

“We would start to put food in front of him while on the treadmill and in the cart and slowly, he started to move forward,” said Ruby Lynn Carter, a veterinary technician certified in small animal physical rehabilitation. “We were then able to take him for walks using a harness and help him learn to shift weight again using a therapy ball.”

Five months after his surgery, Dirty took his first steps on his own.

“It was quite a scene, and there was barely a dry eye left in the house,” Carter said. “A total of almost 40 students worked with Dirty as they completed their rotations. He really became a part of our MSU-CVM family.”

Dirty is now at home with his owners.