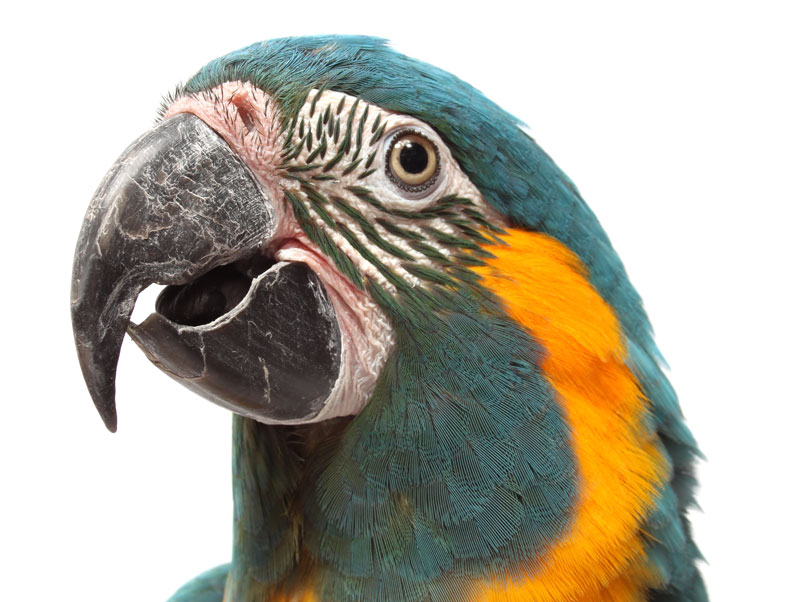 Researchers are making progress in the fight to track and treat one of the most common illnesses affecting exotic birds. Proventricular Dilatation Disease, or PDD, is the result of an avian bornavirus infection and is characterized by intestinal paralysis, which results in food becoming stuck in the bird’s proventriculus. The intestine swells, causing discomfort, and when the gut cannot absorb nutrients from the stalled food, the bird dies. Interestingly, not all birds with PDD show these symptoms, and some can live years after exposure to the virus—as many as six or seven—before developing the illness. PDD was once called Macaw Wasting Disease, as it was originally thought just to impact macaws, but we now know it can be found in parrots, finches, lovebirds, quaker parakeets, and cockatiels, as well as wild water fowl such as geese and mute swans.

Scientists have made some headway in their quest to better understand the disease in the past three years. Dr. Ian Tizard, DVM, Ph.D, and director of the Schubot Exotic Bird Health Center at Texas A&M University, has made PDD a career-long focus. Recent progress has provided something of a good news/bad news situation, according to Tizard.

Recent projects have revolved around testing the drugs veterinarians have been using on sick birds to see if they do, in fact, produce appreciable improvement. Many vets use anti-inflammatories to reduce the swelling of the intestine, particularly Celebrex and Meloxicam.

“Our results there have been quite discouraging,” Tizard said. “In our experimentally infected animals, it’s clear that they don’t seem to do much good, and they may be doing some harm.”

Tizard’s hopes for Ribavarin, which A&M researchers begun investigating a few years ago, have begun to fade. Experiments there suggest that Ribavarin does successfully kill PDD in laboratory tissue cultures, but it has not proved as consistent in infected birds. The trick may be correctly timing the medication’s administration.

You May Also Like  Veterinarians lead council for animal protection

There is a new drug on the scene, which Tizard is “pinning his hopes on:” cyclosporine, an immunosuppressive drug typically used in humans after organ transplant to prevent rejection. Clinic veterinarians at A&M have used cyclosporine on sick patients with some success, and the first trials with experimentally infected birds will begin at the university this summer.

Part of the difficulty in unearthing a treatment for PDD and ABV comes from the differences between bird and human biology. Birds’ systems metabolize drugs much more quickly than ours do, and seem less susceptible to toxicity. It logically follows that they could need a higher or more frequent dose than their size would sugest to see results, but determining exactly what that dose should be and how often it should be given takes a lot of time.

The other difficulty in fighting PDD and ABV is just that viruses are more challenging to beat than bacterial infections. Viruses are smaller and lack the critical, rigid wall membrane that can make bacteria more vulnerable. Viruses also attach to other cells for replication, making them difficult for drugs to catch … which is why we have relatively few anti-virals compared to antibiotics in the marketplace for human viruses like Ebola or HIV.

Tizard and his colleagues have found that there is one reliable way to avoid the spread of PDD: a good, thorough scrubbing.

“A sort of encouraging bit of news is that if aviary owners use really good hygiene, they can drop the prevalence of the disease very fast—in fact that’s probably the only bit of good news in the PDD area, that hygiene will help. It’s not a very tough virus, but it is shed in large amounts,” he said.

Another strategy that’s been successful in some aviaries is the elimination of healthy carriers of PDD from the breeding group. Most researchers are now confident that PDD can be spread from bird to egg, so stopping it at that source could be effective.

“I do know of some aviary owners who have done that and been quite successful, as long as they at the same time use good hygiene—scrub everything, and  are able to separate off positive birds,” Tizard said.

It isn’t necessary to euthanize healthy carriers of the illness—in fact, it’s a big ethical no-no according to Tizard, who pointed out that many birds live their entire lives without becoming ill. Others aren’t so lucky of course, and one of his aims is to figure out when and why that switch is flipped. Texas A&M received a large group of 70 cockatiels a few years back, some of which were healthy carriers and some of which weren’t. The birds are housed together, and Tizard said the whole group is now positive for the virus, but it took 2 years of exposure for the last bird to become infected.

A group at the University of Guelph has looked into occurrence of PDD in water birds. A particularly large die-off of Canada geese was recently traced back to the illness, which makes Tizard think that the birds encountered something together that made the switch from a dormant disease to serious symptoms and death. A&M researchers have concluded, after several tests, that stress does not prompt symptoms, and are now wondering about diet’s impacts on active infection.

Italian researchers have a different theory about the start of the disease’s symptoms. Dr. Giacomo Rossi, professor of general pathology, physiopathology and immunopathology at the University of Camerino, is encouraged by recent research indicating that the disease could be linked to an autoimmune disorder in which the bird’s brain works against itself.

A final area of innovation in recent years has been in the laboratory test for ABV. Texas A&M stopped publicly offering its ABV test of droppings after discovering it could yield a significant amount of false negatives—droppings only contain the virus after it infects the kidneys, which doesn’t happen in all cases. Veterinarians can test blood to hunt for ABV antibodies (a sign the bird has had the virus in its system), but strangely some infected birds don’t make ABV antibodies. The most reliable way to check for ABV remains analysis of brain tissue, which of course isn’t possible with live birds, so experts recommend testing both blood and droppings samples to identify carrier birds.

7 thoughts on “The Latest on Proventricular Dilatation Disease”