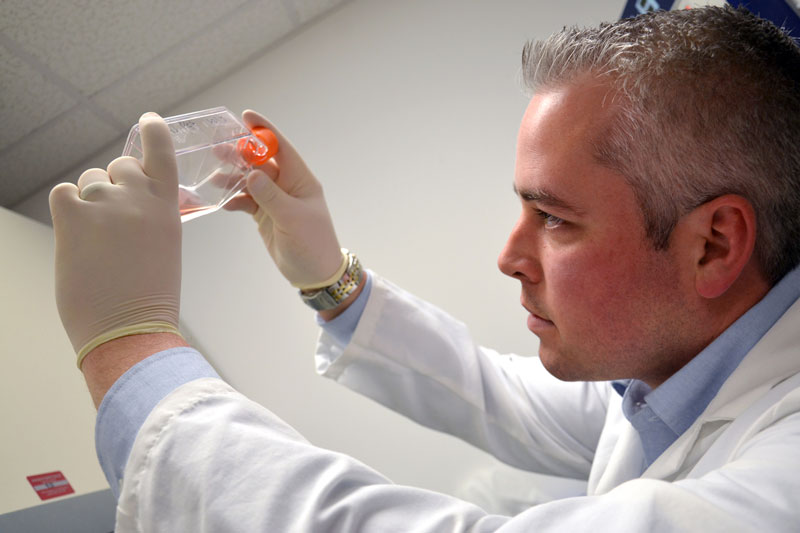 Christopher Overend, postdoctoral associate, hopes to develop a vaccine against a pig virus responsible for reproductive failure in sows and respiratory diseases in piglets.

Christopher Overend, Ph.D., a researcher in the Virginia-Maryland College of Veterinary Medicine at Virginia Tech, has received a two-year, $150,000 grant from the U.S. Department of Agriculture’s National Institute of Food and Agriculture to develop a new vaccine against porcine reproductive and respiratory syndrome virus.

The virus causes severe pneumonia or respiratory problems in newborn piglets and young pigs, resulting in a 20 percent to 80 percent mortality rate, and reproductive failure in sows, according to the college. This leads to annual losses of about $664 million in the United States, the college further noted.

“Although there are current vaccines licensed for use around the world, they are problematic for two reasons,” said Dr. Overend, a postdoctoral associate in the college’s Department of Biomedical Sciences and Pathobiology. “First, the virus is genetically diverse and the vaccine only prevents infection from certain strains of the virus. Second, current vaccines are not very good at stimulating the protective immune response.”

Overend and his mentor X.J. Meng, MD, Ph.D., a University Distinguished Professor of Molecular Virology, said that they are working to create a vaccine that is more visible to the immune system with technology Dr. Meng’s lab has previously used. Overend compared the virus to a thief attempting to get past a security guard and the new vaccine to better training for the security guard.