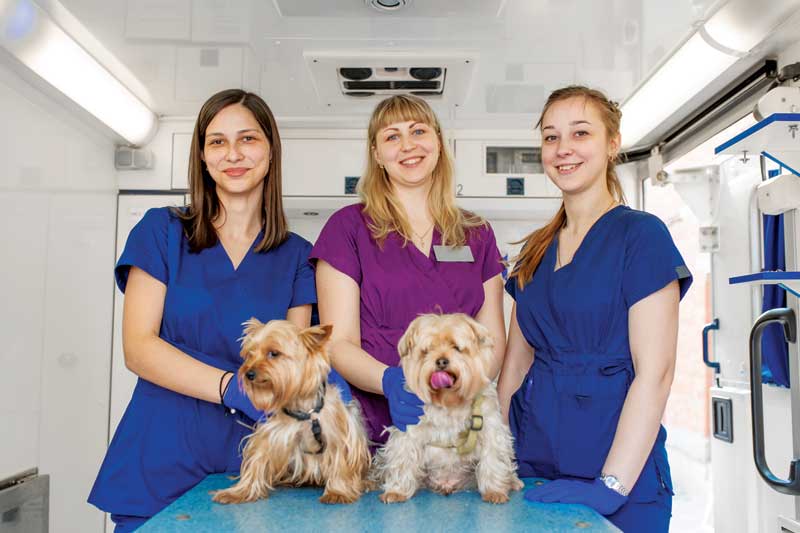 We are an odd lot. We are intelligent and dogged enough to endure the formidable schooling the medical sciences require while famously devoted to the welfare of our non-human companions. It takes a singular combination of drives and aptitudes to enter this profession—much less excel in it. Hence, my observation that most veterinary professionals share a surprisingly uniform brand of quirkiness—one as utterly idiosyncratic as it is endearing.

After all, it takes a certain type of person to enter a profession increasingly understood to be exacting, exhausting, financially non-remunerative, and unexpectedly people-centric. It takes a muscular commitment to animal life to fuel the grit it takes to thrive in our industry.

Personal perils and human-animal ironies aside, the result of a career in the veterinary sciences is a sense of belonging to a somewhat homogeneous culture. Though we often differ dramatically in our heritage and ethnicities—and our culture certainly varies across the specialties and subspecialties among us—the personalities differ less so in certain areas.

While by no means exhaustive and in no way applicable across the board, the following personality traits are my best (and lighthearted) attempt at boiling down the characteristics shared by most veterinary professionals I know. I present them here mostly for funsies, but also because there is always a kernel of digestible truth worth contemplating any time we pause long enough for self-examination.

You know it is true. Many of us fall into the category best described as “people-pleasing,” presumably because we derive some sort of psychological boost from being liked by the humans we interact with.

As one of my colleagues suggested, perhaps the unconditional love we so treasure in our own beloved pets serves as a model for any ideal relationship, human or animal. In other words, people-pleasing to win over our clients, families, friends, and colleagues stems from the same natural inclination to
be cherished.

The end result of our people-pleasing behavior, however, can be a double-edged sword. While it makes us work harder to succeed in a customer service-driven profession, it also has a sinister side. Consider the cumulative toll it exacts to maintain a preternaturally pleasant demeanor, the self-imposed stress we suffer when we can’t keep it up, the angst we take home after reading a bad review on social media, or the way we feel when we work so hard to make everything go well, only to be told we have failed to satisfy those around us.

Another untoward consequence to our people-pleasing is the conflict avoidance that comes with the territory. In most cases, this bent of ours works in our favor. Again, most of us labor in a customer-driven profession where it pays to avoid telling people where to put it, even when they mightily deserve a well-timed tongue-lashing.

Trouble is, holding back leads to an accumulation of resentments unlikely to remain contained—especially when you most need it to. Moreover, conflict avoidance means you get less done than you might have had you sought cooperation sooner—and less combatively—whether from your clients, co-workers, colleagues, or families.

On the plus side, we are a fairly optimistic group. Most of us, dare I say, love going to work and have generally positive feelings about what we do (The older I get, the more I feel pretty lucky in this respect.). We tend not to expect the worst or otherwise dwell in the wreckage of the future. Maybe we are too busy doing to think about it (that is one theory), but it takes a certain amount of optimism—Pollyanna-level positivity, perhaps—to dedicate your life to serving animals.

The downside of optimism is it is a line pin away from self-delusion. It has been said the human capacity for self-delusion is a bottomless well (“de-Nile is a long river,” as the saying goes). It has also been argued veterinarians are innately delusional in certain areas, financial being foremost among these. After all, it takes a certain kind of cognitive dissonance to talk yourself into what you believe will be a fairly and equitably earned degree of financial success after amassing $300,000 in student loan debt when the average income tops out at around $150,000.

The heart wants what it wants, and most of us would not be here if we knew how it really feels to juggle credit cards, put off having a house or a family, and work 10-hour days just to tread water. It is part of our inner landscape, for better or worse.

To a fault, don’t you think? Personally, I can’t help it. Sometimes I think I cultivate a well-heeled clientele just so I can afford to keep an in-house kitten rescue, “lend” money to the occasionally desperate team member and give away my services to the fixed-income elderly, whose dogs desperately need total ear canal ablations (TECA) but can, in no universe, afford them.

It is often said women have ruined the profession with our generous discounting of services, but in my experience, it is the guys who have done most of the gifting. Overall, I am pretty sure the trait claims no gender preference.

It takes a certain kind of patience to maintain our faith in the eventual satisfaction of our long-term goals. Much the same might be said for other professions, but ours, as the youngest among us know better than anyone, would take longer to fully realize given our profession’s financial constraints. Despite the denial factor, we all seem to have internalized the concept of much-delayed gratification. We have all waited a very long time to eat our marshmallows.

Grit is what they are calling it these days. It is what veterinary school admissions offices look for most in aspiring candidates and what we seem to possess in spades. The dedication, stick-to-it-ness, fight and determination it takes to make it defines us veterinarians—perhaps most of all.

It is not in all of us, to be sure, but this trait has legs in our profession, probably because it takes a certain amount of humility to thrive in a medical field where those we serve hold less power than in any other allied profession. Where we get into trouble, though, is when we overstep the mark and lapse into self-pitying territory.

The best among us are capable of turning this around quickly into self-deprecation. It is a paradoxically attractive—and highly successful—survival I wish I could say we were universally adept at.

The flip side of humility is arrogance, which does not plague our profession as much as it does most medical fields. Instead, we rely on knowing what we do is uniquely ours and irreplaceably unique in the scope of human endeavors. It is the kind of self-confidence we excel at—not the “I-can-remove-a-spleen-in-13-minutes” kind of confidence (though God knows this kind is lurking among us, too).

My favorite, most admired area of distinction within the profession is this one. Which is why, ever the marshmallow hoarder, it occupies the final spot on my list. Perhaps we share the sense of independence because most of us were raised as little outliers in our quest for “vet-dom,” or maybe because it takes a certain amount of self-reliance to achieve any goal, much less one that is a little off the beaten path, as it was for so many of us.

Whatever the case, self-reliance/independence is what I hope continues to define us as a profession moving forward. Of all these, it is the one to keep us growing and thriving in the face of forces currently striving to reshape us into pliable little cogs. But then again, maybe it is just my optimism talking … or my bottomless capacity for self-delusion—take your pick.

Patty Khuly, VMD, MBA, owns a small animal practice in Miami and is available at drpattykhuly.com. Columnists’ opinions do not necessarily reflect those of Veterinary Practice News.