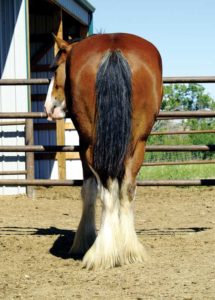 In equine practice, administration of fluids is sometimes necessary for conditions such as colic, heat exhaustion, dehydration, or shock. Most commonly, fluids are administered to horses either by intravenous (IV) infusion or by nasogastric (NG) intubation.
A recent report in the Equine Veterinary Journal (EVJ) suggests another method of administering fluids—per rectum—may be a viable alternative for fluid therapy in some horses.

Due to its physiology, the rectum was commonly used in human medicine in the past to deliver medication and fluids rapidly and reliably. That said, its use waned due to many factors, including patient reluctance to accept the route of administration. More recently, however, the administration of medication per rectum (proctoclysis) has received renewed interest.

In human medicine, proctoclysis can be used where there is limited access to clean settings and sterile equipment, in emergencies, and at the end of life when intravenous access may be limited or poorly tolerated (e.g. palliative care). Human medical literature contains reports of patients being treated by rectal infusion for dehydration, alcohol withdrawal, vomiting, fever, myocardial infarction, hyperthyroidism, and cardiac arrest. In addition to fluids, various medications, including aspirin, lorazepam, ondansetron, acetaminophen, methimazole, and buspirone, have been shown to be absorbed per rectum.

There are rare reports of rectal fluid administration in horses. For example, in one study, a 44-L bolus of isotonic sodium chloride administered rectally over 20 minutes to horses that had previously been given furosemide was well-tolerated. However, while the rectally administered fluid caused fecal softening, there was no apparent effect on the horses’ hydration. Fluids have even been effectively administered per rectum to elephants.

One of the advantages of administration of fluids per rectum is that the device does not need to be sterile, its placement is fairly straightforward, and it requires limited expertise. Based on reports in human medicine, absorption is rapid and the expected effects from the medications administered are seen quickly. This has been shown, for example, with phenobarbital.

Administered via a nasogastric tube, enteral fluids are an excellent way to help correct mild-to-moderate fluid deficits. Regular administration of enteral fluids also has been shown to be effective in helping to correct cases of impaction colic. However, if frequent NG tubing is required, or a tube is left in place, complications can occur, such as pharyngitis or laryngitis. Of course, an indwelling NG tube interferes with normal eating. Lastly, some horses resist NG tubing, and the procedure can sometimes result in considerable epistaxis from trauma to the nasoturbinate bones.

Fluids were given per rectum at a rate of 5 mL/kg/hour over six hours, which is equivalent to more than twice the accepted maintenance fluid rate. In a pilot study, horses showed signs of discomfort at higher rates of infusion. For example, at 10 mL/kg/hour, horses were noted to be in some discomfort, indicated by walking, kicking, and tail flicking. At this higher rate, watery feces also were seen. Interestingly, similar signs were seen when polyionic fluids were administered per rectum at the
5 mL/kg/hour rate.

The study’s results indicated that when fluids were given per rectum to normal horses at a rate of 5 mL/kg/hour over six hours, the effects on hydration were similar to those obtained by IV administration or NG tubing at the same rate. All methods of fluid administration at this rate resulted in a decrease in packed cell volume (PCV) and total solids.

In appropriate settings, rectal fluid administration would appear to offer several advantages over other routes of fluid administration to horses. When compared to polyionic solutions for IV fluid administration, tap water has the twin virtues of being inexpensive and readily available. In addition, administration can be done without concern regarding sterility and would appear to have minimal side effects. The procedure is practical, easy to perform, and well-tolerated. The authors concluded that, “Rectal fluid therapy offers a safe and manageable alternative and/or an adjunct to NG tubing and IV fluid therapy.” Further investigations into fluid and medication delivery per rectum seems to be warranted.