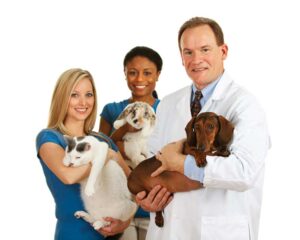 Laura had been working as a technician for a month at Soft Touch Pet Clinic. One day, Chris, the hospital manager, caught her using her cell phone during her shift.

The very next day, Chris sent a strongly worded email to all employees explaining the new policy: As of this moment, everybody had to leave their cell phone in their locker. End of story.

This is a classic example of what author and entrepreneur, Chuck Blakeman, calls managing based on the lowest common denominator (LCD). “One person did something stupid, and everybody got punished for it. That’s how LCD managers rule. They manage by policies.”

He explains: “It’s a form of cowardice. Instead of actually addressing the culprit one-on-one, Chris sends a mass email, and feels she’s done her job.”

Are you sending the right message?

But what does Chris’s behavior communicate to the team members who had been responsible with their cell phones? They might think, “It doesn’t pay being responsible” or “I got punished in spite of doing the right thing.” “So they might as well break another rule, and it’s a spiral to the bottom,” laments Chuck.

He continues: “With LCD, you manage by policies. You tell people what to do. You take the brains out of them. In an LCD world, most employees are considered stupid or lazy—or both. This is actually nothing new. It was described in a paper in 1903 by Fredrick Winslow Taylor called, “Scientific Management.”

Taylor writes: “The average worker is so stupid; he more resembles
the ox than any other type.”

In addition, “The average employee works only so hard as to not get fired.” So because 1903 employees were considered stupid and lazy, the only solution was to put smart and motivated people in charge of them. And so managers were created. Managers gave workers orders so they would work hard. That is the foundation of all modern management.

It’s no wonder that for years, survey companies like Gallup consistently report that only 30 percent of team members feel engaged and are participating
in their workplace. Translation: 70 percent of workers are disengaged, disconnected, and merely going through the motions. They are present physically, but absent mentally.

Talk to several practice owners and they virtually all categorize their employees in three groups:

Going from LCD to HCD

People who understand the highest common denominator (HCD) concept take a completely different approach. They refuse to believe people are stupid and lazy, and they require everyone to be smart and motivated.

Let’s go back to our cell phone scenario. Instead of finding revenge in a memo, an HCD leader would instead sit down with technician Laura, the culprit, who isn’t behaving as an adult. Morphed into an HCD leader, Chris would say, “Laura, we had talked about our policy regarding cell phones. You signed our employee manual. Yet, you knowingly violated that policy. So I’m giving you a verbal warning. If you do it again, I will have to give you a written warning. And if you do it one more time, I will have to let you go. Since I don’t want this to happen, I’d like you to shadow Bob, who is really good at following our rules and using his phone appropriately.”

Can you relate to the differences between the LCD and the HCD approaches? With the LCD philosophy, everybody is punished because of one person. Everybody is dragged to the bottom. With the HCD style, Laura gets the help she needs to raise to the level of her coworkers. Everybody is pulled up toward the principles you want them to embody.

Of course, the cell phone is just an example. The same concept applies to everything you value in your practice, including:

In Blakeman’s company, they take these concepts one step further. All team members rate each other monthly via a confidential peer recognition survey. The questionnaire asks quite simply: “On a scale of ‘1 to 10,’ how does X embody our five core values?”

Each staff member is reviewed. If anybody gets a score below “8,” you have a moral obligation to explain why you chose that score, and suggest what they can do to improve. Then results are tallied for each employee.

“As we are all HCD leaders and have very high expectations for our team,” Chuck explains, “we expect everybody to be at least an ‘8.’ Think about it. If we put up with someone who is a ‘7.8,’ and doesn’t honor one of our five values, what does that tell the rest of the team? That they could disregard a different value? Again, this would lead to a race to the bottom. We prefer a race to the top, which is the reason why we only want ‘8s’ on our team.”

He continues: “Our team knows our expectations: we all need to be ‘8s’ and above. A score of ‘7.8’ is no longer acceptable. Everybody should be at least an ‘8’ every day. Nobody is a ‘9’ every day, and very few people are a ‘10’ consistently. So if you’re an ‘8,’ you are incredible. You have the right mindset. You’re a rock star. And we want more people like you.”

This is how an HCD leader thinks and the mindset that can help all your team members be rock stars. You have nothing to lose—and everything to gain—by implementing this approach.