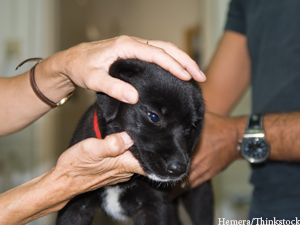 Boehringer Ingelheim Vetmedica Inc. received U.S. Food and Drug Administration approval for an oral vaccine that aids in the protection against the primary pathogen of canine infectious respiratory disease in dogs.

“Doctors told us they like intranasal vaccines because they provide optimal immune responses, but doctors and their patients dislike having these vaccines given in the nose,” said Arne Zislin, VMD, technical manager veterinarian for BIVI. “So we’ve developed an easy-to-administer oral vaccine that is mucosally absorbed.”

The vaccine proved to provide protection against B. bronchiseptica in a challenge study, according to Zislin.

Administration requires veterinarians to instill a 1.0 mL dose into the buccal cavity of healthy dogs eight weeks of age or older, and the company recommends annual revaccination.

B. bronchiseptica vaccines are considered noncore by the American Animal Hospital Association 2011 Vaccination Guidelines, but BIVI says many dogs are at risk of infection.