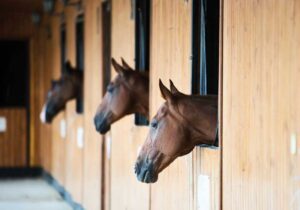 With the space limitations inherent in urban areas especially, many horses are housed in box stalls. Horses used for a variety of performance disciplines spend much of their time alone in confined spaces. This is in contrast to feral horses, who demonstrate a normal social behavior whereby they live in herds and roam freely between 25 and 50 miles per day. The main arguments in favor of housing horses in stalls relate to practicality, safety, and comfort issues, for both the animal and humans.

Nevertheless, box stall housing raises concerns regarding horse welfare. Many people are aware of the potential for stress in stalled horses. Confining them in individual box stalls impinges on their ability to move, and also restricts social interactions with other horses. These animals are highly motivated for both movement and social interactions. As such, environments such as pasture with other horses are more conducive to an optimal welfare state, at least theoretically, than box stalls.

The following four types of behavior indicators may be noted in horses in which welfare has been compromised:

An article published in the online, open access journal, Animals, examined commonly prescribed solutions to stall-related stressors and their effectiveness.1 A total of 187 horses, stabled without access to paddocks or grazing turnouts, were observed five times daily by a single observer over 50 nonconsecutive days during a nine-month period.

The impact of four categories of interventions tested the expression of the four behavioral indicators in three different analyses:

3) Factors related to the type of equitation practices such as the riding discipline.

4) The intensity of the physical activity in which the horse participates, such as the time spent being ridden per week.

Unfortunately, most of the factors studied did not change the expression of stress indicators. No gender effects were seen in the study, meaning there was no difference observed between stallions, mares, or geldings. Commonly prescribed interventions, such as increasing physical activity through riding, by lunging, or by putting horses on a mechanical walker, did not seem to reduce stress-related effects. Factors associated with the regularity of the training, such as the number of events in which horses competed during the nine-month study period, or the time spent being ridden or trained, also failed to show a significant effect on the behavioral indicators. Lastly, factors related to equitation, such as the discipline in which the horse competed and the level of performance, had no significant effect on measures of welfare.

Providing a grilled window in a stall also did not appear to help relieve stress. While they may theoretically allow for increased social contact, providing a window into an adjacent horse’s stall also was not associated with decreased measures of stress. There was a direct relationship between the amount of time horses spent in their stalls and the likelihood they would be unresponsive to their environment.

A few interventions did seem to provide some relief. Free exercise, allowing stabled horses to interact with other horses, and allowing horses to eat fibrous feeds as much as possible appeared to help mitigate stress.

The study’s results showed only three factors tested had an influence on the expression of the behavioral indicators:

1) When compared to other types of bedding, straw bedding seems to invite horses to lie down and explore their environment. Straw bedding also may influence food intake.

2) A window opening onto the external environment allows horses to look outside and see other horses. This seemed to influence the expression of aggressiveness toward both horses and humans.

3) A reduced quantity of concentrated feed. Feeding concentrates promote gastric acid secretion in the stomach, which, when combined with low-forage diets, may lead to gastric irritation, ulcers, and the development of stereotypies (e.g. cribbing or stall weaving) as an adaptive response. Other studies also have shown a positive correlation between feeding concentrates and behaviors such as cribbing.

Unfortunately, while the behavioral effects of these three factors were deemed to be beneficial, they also seemed to be fairly mild. In other words, they did not override the more negative aspects of stall confinement.

Under any circumstances, it appears to be inarguable that living strictly in box stalls can be detrimental to horses’ overall welfare. Further, the longer horses spend in stalls, the more likely it is they become unresponsive to their environment. In addition, older horses are more likely to demonstrate such unresponsiveness than younger horses. This may reflect an internal state similar to depression in humans, which for us, also can be associated with physical signs, such as back pain. It would be interesting to study whether this also occurs in horses.

The bottom line from this study seems to be that many of the things people do to help horses cope with the stress of stall confinement have little measurable effect. That does not necessarily mean such efforts should be abandoned. For example, horses benefit from regular exercise, regardless of its effect on stress mitigation. Extended time in pasture or long turnouts with other horses could theoretically improve the welfare of stalled horses. The results
of the study do imply, however,
that commonly recommended efforts at stress mitigation may not be very effective, and could or should be augmented by other, more effective interventions.

1 Ruet, A., et al. Housing Horses in Individual Boxes Is a Challenge with Regard to Welfare. August, 2019. bit.ly/2kzkHaA.