The American Society of Anesthesiologists (ASA) considers monitoring CO2 a standard of basic anesthetic protocol. The association’s guidelines include ensuring adequate ventilation to patients receiving general anesthesia, providing continuous evaluation of ventilation, and verifying correct positioning of an endotracheal (ET) tube by measuring CO2 in the expired gas. In a closed claim study, anesthesiologists who reviewed 1,175 anesthetic-related closed malpractice claims found capnography and pulse oximetry could have potentially prevented 93 percent of avoidable anesthetic mishaps.1 Some of those reported cases included death or injury from intubation error.

Capnography, which is the measurement of carbon dioxide in a patient’s breath, provides a good picture of the respiratory process, which comprises metabolism, circulation, and ventilation. It can pick up changes in metabolism that result from factors such as fluctuation in a patient’s temperature that causes an increase or decrease in CO2 excretion. Capnography reflects changes in circulation resulting from poor cardiac output, variations in ventilation frequency and rate, or restrictive disease. Equipment-related anesthetic problems can be promptly detected and corrected when using capnography. For some of these problems, both physiologic and equipment-related, there is no other parameter that will alert you of trouble before the patient is adversely affected. For instance, just as the anesthesiologists found in their study, monitoring CO2 in a patient’s breath instantly confirms whether tracheal intubation was successful.

Capnography2 is the measurement of carbon dioxide in a patient’s breath over time. Waveform capnography represents the amount of carbon dioxide (CO2) in exhaled air, which assesses ventilation. It consists of a number and a graph. The number represents capnometry, which is the partial pressure of CO2 detected at the end of exhalation. This is end-tidal CO2 (ETCO2) which is normally 35 to 45 mm Hg in dogs and 28 to 32 mm Hg in cats. The capnograph is the waveform that shows how much CO2 is present at each phase of the respiratory cycle, and it normally has a rectangular shape (Figure 1). Capnography also measures and displays the respiratory rate. Changes in rate and tidal volume are displayed immediately as changes in the waveform and ETCO2. l

You May Also Like  Kennels for kitties: Evolving wisdom on feline housing

Capnography can detect a multitude of equipment problems and malfunctions. Eliminating accidental esophageal intubation is one, but monitoring CO2 can alert staff to several other complications that occur at the endotracheal site. A CO2 reading can signal a leaking or deflated cuff, kinked or obstructed tube, bronchial intubation, accidental endotracheal extubation, or inadvertent disconnection of the breathing circuit from the endotracheal tube. Within a couple of breaths, alterations in the shape of a previously normal waveform appear. It also picks up faults with the anesthesia machine in real time. Malfunctioning unidirectional valves, exhausted or faulty CO2 absorbent/channeling, and excessive dead space can all be seen with capnography. 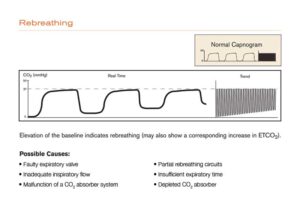 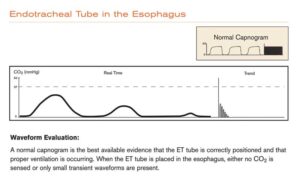 Expired CO2 absorbent is an often-overlooked explanation for anesthetic complications and cause for rebreathing carbon dioxide. Typically, CO2 absorbent should be replaced after every eight to 10 hours of use. You may need to change it more frequently based on your anesthetic caseload, length of your procedures, size of the patients you treat, and the fresh gas flow rate. Relying on color change alone is unreliable. Most traditional CO2 absorbents do not have permeant color change. This only occurs during the actual chemical reaction with CO2 and the absorbent will revert close to its original color after some time. Once carbon dioxide absorbent has exhausted its ability to absorb CO2, it can still appear off-white in color. Remember to tap the canister while filling with CO2 absorbent granules to help prevent channeling. When gas takes the path of least resistance, it can overexpose those granules, and if that path is in the middle of the canister, the color change may not be obvious. Thus, when replacing the absorbent based on its color change, the patient may actually be rebreathing CO2 (InspCO2). This problem can be spotted immediately when using capnography.

You May Also Like  Are you ready for a potential spike in intestinal parasites?

Excessive dead space is another potential anesthetic complication that can be addressed by monitoring capnography. An area where there is no gas exchange, dead space is a component of the veterinary anesthesia machine and patient that can be ignored easily. Some dead space in a patient is normal, such as anatomical dead space, but it is when we fail to recognize the added equipment or mechanical dead space that we run into complications. With the aid of the CO2 sensor, an increase in carbon dioxide levels will be seen and staff can react in a timely and effective manner.

Jenny Flynn, LVT, is the supervisor of animal health clinical specialists for Midmark Corp. Special thanks to Andrew Schultz, Jr., MBA, former director of monitoring and critical care for Midmark and the company’s current director of business development and clinical services for his contribution to this article.