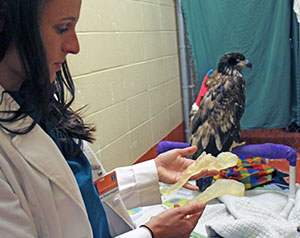 A collaboration between the University of Illinois College of Veterinary Medicine and College of Engineering meant a bald eagle got a repaired left humerus and a chance at flying normally again.

The eagle was in need of surgery when its left humerus healed incorrectly after a gunshot wound had left it shattered months earlier. The College of Engineering worked to create the life-sized plastic models of both the bird’s right humerus and the injured one.  These were used as a reference when avian surgeon, Dr. R. Avery Bennett, performed surgery to correct the eagle’s humerus.

Creating the bone model prototypes was “complicated,” according to the college.

“First, the massive dataset from the spiral CT scan of the eagle had to be processed by veterinary radiologist Dr. Stephen Joslyn, who consulted from Australia, to ‘threshold’ the data, that is, to tell the computer how to differentiate between ‘bone’ and ‘not-bone’ in the minutely nuanced information generated by the CT.

Because the fragmented nature of the injured bone did not yield a single shape that could be output by the printer, medical illustrator Janet Sinn-Hanlon was asked to use the more powerful software of her trade to manually thicken and link areas of bone. Dr. Bennett reviewed the work and requested that the ‘good’ humerus printed out for comparison. Wildlife intern Dr. Nichole Rosenhagen facilitated communications among all these professionals.”

Then on the day the bones were ready to be printed, there was another problem. The 3D printer was completely booked. Ralf Moller, director of technical services in the Department of Mechanical Science and Engineering, and who oversees the Rapid Prototyping Lab, stepped up, however.

“Ralf Möller was a hero in this case,” Medical Illustrator Janet Sinn-Hanlon told the university, “Ralf arranged for the models to be printed and processed overnight so they would be ready by the time the building opened at 7 the next morning.”

With model bones in hand, picked up by wildlife intern Dr. Nichole Rosenhagen, Dr. Bennet was able to perform surgery on May 5. The surgery took 3 hours.

Once the eagle has recovered, the university hopes it will be able to fly normally again.