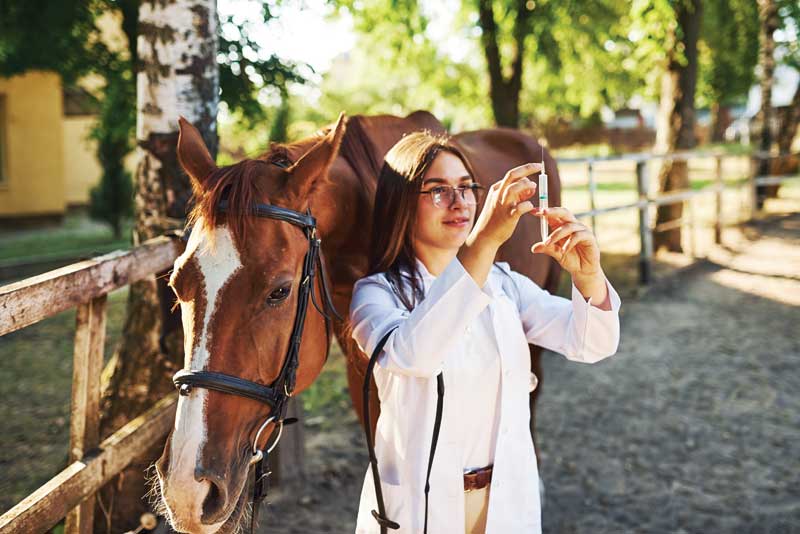 In any of their various chemical configurations, corticosteroids are a cornerstone of equine therapy. First, they are used to combat inflammation in many different body systems. Second, they are indispensable medications for the treatment of skin allergies, equine asthma, and many other conditions.

Nevertheless, corticosteroid medications are used with some trepidation in many cases due to a putative association with the development of laminitis. There are anecdotal reports of horses developing laminitis after they have been given systemic corticosteroids. The association between laminitis and corticosteroids is a contentious issue, and concerns may lead veterinarians to be reluctant to use such medications. Further, their use may persuade horse owners to decline them altogether.

Thus, it may be helpful for equine veterinarians concerned about use of corticosteroid drugs to be aware of a recent review. Researchers at the University of Liverpool looked for evidence to answer the clinical question, “In reported cases of iatrogenic laminitis in adult horses and ponies, is therapeutic administration of systemic corticosteroid associated with the onset of laminitis?”1 The results of their study may be useful in helping clinicians decide to use corticosteroid medications, or, alternatively, to allay the fears of clients who may be reluctant to allow them as a course of treatment.

There are many studies that have investigated the use of corticosteroids for the treatment of a variety of clinical conditions of horses; these trials have not observed laminitis after administration of the medication. This indirect evidence is interesting; however, it has still been suspected that laminitis following corticosteroid administration is more likely in horses with other medical conditions, including severe systemic disease or endocrine disease such as pars pituitary intermedia dysfunction (PPID). It has also been stated the risk of laminitis is greater with more potent corticosteroids such as triamcinolone (an association of laminitis with prednisone or prednisolone has not been reported at this time).

You May Also Like  Going for the gold: Meet the U.S. jumping team vet

The mechanism by which such an association would occur is not clear. Research indicating corticosteroids might directly or indirectly affect vasoconstrictors led to the suggestion corticosteroid-associated laminitis occurred due to decreased perfusion. However, while laminitis is associated with changes in circulation to the digit, these changes have not been shown to be the primary cause of the condition. Another potential postulated mechanism might be due to the effects of corticosteroids on insulin. Elevated insulin levels and increased production of insulin have been demonstrated following corticosteroid administration, and insulin resistance is associated with an increased risk of laminitis. However, while these may be plausible pathophysiological hypotheses, they also do not support the contention that corticosteroids cause laminitis.

The evidence for a causal relationship

It is perhaps surprising to some to realize there have not been experimental studies conducted to investigate the frequency of laminitis following corticosteroid administration. In addition, studies have not been designed to evaluate any temporal relationships between corticosteroid administration and the incidence of laminitis. Instead, there are single case reports, case series, studies evaluating corticosteroid treatment for other disorders, a database of adverse drug events, and even a court case transcript. There has also been one large observational study, which failed to associate corticosteroid injections of joints with subsequent laminitis.

Fourteen cases (from 10 publications) provided some information regarding the number of corticosteroid treatments and/or the duration of treatment. Multiple doses of corticosteroids were involved in 11 of 14 cases. In the other three cases, although laminitis was reported after a single dose, those horses had also received corticosteroid therapy at some point. Regarding adverse drug reports, 106 cases of laminitis were reported over a 26-year period. However, of those cases, only 19 (18 percent) were associated with corticosteroid treatments. The remainder of the cases was associated with administration of anthelmintics, antibiotics, or antiprotozoals.

You May Also Like  New year, new mindset: Think, be, and live positive

When considering whether a case of laminitis is associated with previous corticosteroid administration, the longer the period of time between administration of the medication and the development of disease, the less likely it becomes the drug was a predisposing factor. Like all medications, corticosteroids have reduced efficacy with the passage of time. Some reports identify laminitis occurring as long as four months after the medication was administered; it would be extremely unlikely for this to be a direct causal relationship.

The authors found there is no conclusive evidence to support the assertion there is a causal association between the systemic administration of therapeutic levels of corticosteroid medications and the development of laminitis in healthy adult horses and ponies. They concluded there is weak evidence of an association between the administration of multiple doses of systemic corticosteroids and the development of laminitis in adults and ponies when those animals are affected by underlying endocrine disease or severe disease of various body systems.

Given the persistent association between the administration of corticosteroids and laminitis and the frequency with which these medications are employed in equine practice, it is perhaps surprising that no well-designed cohort studies have been done to try to help further define the risk of laminitis subsequent to corticosteroid administration. Such risk as there is would appear to be small; however, the evidence for even a small risk is weak. Nevertheless, the study’s authors advised veterinarians consider the possibility of a risk prior to giving corticosteroids to horses, and especially when multiple doses or high doses are being prescribed. The existence of underlying disease processes or endocrine disease should also be considered prior to administration.