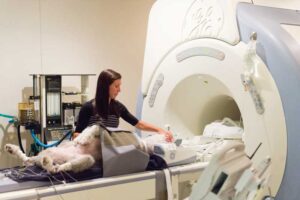 The dilemma over whether to use CT or MRI is fairly common. While there are many cases that could be imaged via either modality, experts say there are specific instances where one is preferred over the other.

“In general, MRI can see more medically treated lesions, but CT and MRI can see lesions that are amenable with surgery,” Dr. Pease says. “However, gastrointestinal lesions are questionable. The motion of the gastrointestinal tract makes large artifacts, as does metal (e.g. microchips), which is not a factor with CT as opposed to MRI.”

“MRI has excellent ability to image soft tissue structures and is able to differentiate grey matter, white matter, nerves, and cerebrospinal fluid to a much greater extent than CT,” Dr. Nelson says. “In any case, where brain disease is suspected—such as the acutely seizing dog or the dog with sudden behaviour change—MRI is the test of choice. The cause of these symptoms might be a brain tumour, inflammatory disease, or a vascular event, and while CT might be able to identify some of these abnormalities, it is not nearly as sensitive as MRI.”

“A majority of the time, the choice between CT and MRI divides along whether the area being imaged has a high tissue contrast or a low tissue contrast between neighbouring tissues,” says Seth Wallack DVM, DACVR, founder and chief executive officer (CEO) of the Veterinary Imaging Center of San Diego. “An example of high contrast is in the lung, where the alveoli contain air next to the blood vessels, which are soft tissue attenuating. Examples of low tissue contrast between neighbouring tissues are the brain, eye, muscles, tendons, and ligaments surrounding a joint, joint fluid, and the adjacent cartilage.”

Diseases of the spinal cord also are best imaged with MRI, as CT is able to define margins of bone, Nelson says. However, it provides little detail about diseases within the spinal cord itself and is less sensitive than MRI in detecting problems that cause spinal cord compression, he adds.

“In the case of a dog presenting with thoracic or pelvic limb deficits, where the cause might be due to intervertebral disc extrusion or a tumour of the spinal cord, MRI is the best imaging option,” Nelson says. “CT is reasonably sensitive in detecting acute disc extrusions in chondrodystrophic dogs, such as dachshunds, and is sometimes used as a first-line test in that population because it is much faster than MRI, but in other cases, MRI is the first imaging choice.”

Both CT and MRI are cross-sectional imaging modalities that provide images of slices of the patient; however, bone and lung details are much better with CT, while soft tissue contrast is much better with MRI, says Wilfried Mai, DVM, PhD, MS, DECVDI, DACVR, a professor of radiology at the University of Pennsylvania School of Veterinary Medicine.

You May Also Like  Are your patients waking up during surgery?

“CT acquisition times are much shorter—a few seconds to scan an abdomen or thorax, while they are much longer for MRI—45 to 90 minutes depending on the indication and body region,” Dr. Mai says. 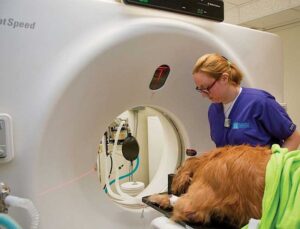 Both require patients to remain still, but some fast CT scans can be performed under sedation, while MRI always requires general anesthesia. “Also, MRI is substantially more expensive than CT,” he adds.

“The exception to this would be maybe the diagnosis of traumatic vertebral/skull fractures or luxations, where CT may be better, though even in these cases, CT may overlook soft tissue injuries that may be diagnosed with MRI,” he says.

MRI is also superior to CT in several musculoskeletal soft tissue lesions, such as shoulder tendonitis and in the stifle for cruciate ligament tears or meniscal tears. “Again this is due to the excellent soft tissue contrast of MRI, whereas

For thoracic disease in general, and in particular for the lungs, CT is preferred, as respiratory and cardiac motions complicate MRI acquisition in the thorax, air in the lungs generates a poor signal, and a number of artifacts deteriorate image quality. “CT on the other hand provides fast imaging and with high resolution of the lung parenchyma. It also allows assessment of the mediastinal, cardiovascular, and pleural structures,” Mai says. “A common indication of thoracic CT is to rule out pulmonary metastatic disease, as CT is much more sensitive than radiography for this diagnosis.”

It’s uncommon for an animal to have both a CT scan and MRI of the same area, but there are cases that sometimes call for both.

Animals with spinal cord tumours or involving the vertebrae may have both a CT and MRI, as the radiation therapist needs information from both modalities to exactly identify tumour margins and to input the data into planning software, Nelson says.

“Animals with spinal fractures also may have both examinations, as the MRI provides information about spinal cord damage, but the CT is used to help guide surgical planning and stabilization of the vertebrae,” he adds.

CT is the best test for advanced imaging of thoracic and abdominal disease, and MRI is generally unable to image structures that move or are adjacent to highly mobile structures, he says.

“Due to respiratory movement, most abdominal disorders are imaged first with CT,” Nelson says.
“It is common for CT to be used for surgical planning in dogs with large abdominal tumours, such as those affecting the liver, as it is able to quickly identify the vascular supply to the tumour and what portion of the liver is affected. CT also is ideal for imaging pulmonary diseases, such as pulmonary tumours or searching for small pulmonary nodules.”

CT is also the best test when imaging osseous structures, as it is able to provide much finer bony detail than MRI, and also can cover a much larger body region, he adds.