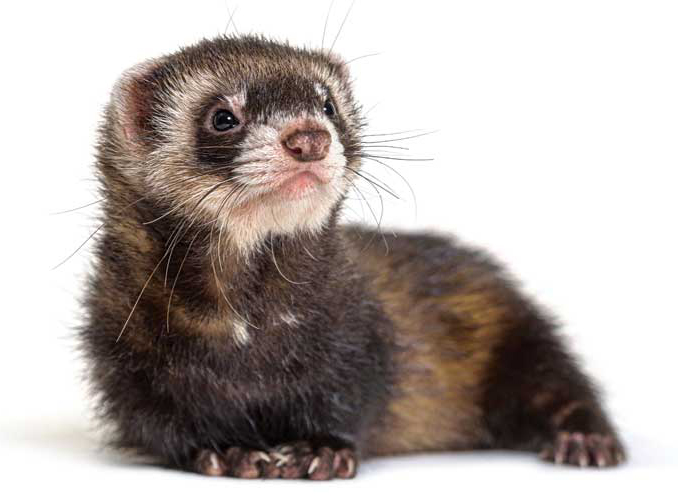 In the middle of a busy day full of appointments and walk-in emergencies, up pops a new patient on your schedule. It is a four-year-old male neutered ferret that has developed hair loss over its tail and back. Since your veterinary school was not heavily into ferret medicine (read: you had a grand total of a one-hour lecture on ferret diseases) and this is the first ferret you have seen in practice, you start thinking ahead—should I do a skin scrape or fungal culture? You remember something about lymphoma in ferrets being common, could this be lymphoma?

Well, the bad news is, it is likely none of those differentials are high on the rule-out list for this patient, but the good news is this article will help you navigate a clear path toward diagnosis and treatment for ferrets with hair loss related to adrenal gland disease.

Among the many common diseases ferrets are prone to, adrenal gland disease might be the leader. I will go through the signs, the changes seen on the physical examination (PE), the diagnostic tests, and treatment of those ferrets afflicted with adrenal gland disease. Usually, this is a very easy disorder to diagnose based on just signalment, signs, and PE findings. In contrast, the treatment for this disease is not so straight forward and there are many factors playing into which therapeutic modality is right for each ferret.

Just like the ferret on your schedule, about 70 percent of ferrets with adrenal gland disease experience some form of hair loss. Typically, an owner will first notice areas of alopecia on the tail. As the disease progresses over time, alopecia continues to creep further up to the base of the tail, inches along the flanks, and can eventually include the entire body.

Ferrets do not necessarily lose their hair in clumps, but as hair naturally falls out, it is not replaced, and eventually the ferret is left with only guard hairs along its tail and much of its body. Not all ferrets follow this pattern of hair loss and any ferret with evidence of alopecia anywhere on its body is a suspect adrenal gland disease case.

Female ferrets with adrenal gland disease are equally as prone to hair loss as their male counterparts, but females can also exhibit an enlarged vulva. It is estimated that up to 90 percent of female ferrets with adrenal gland disease do so. An enlarged vulva can also be seen in intact ferrets that are in “heat” and in ferrets that are spayed, but have an ovarian remnant.

For these reasons, it is disconcerting to an owner to see the swollen vulva, as it might mean their ferret is intact or the spay procedure was done incorrectly. Intact ferrets go through their first heat between eight and 12 months of age, and it is at that time the vulva begins to enlarge.

In contrast, most ferrets develop adrenal gland disease near age three or older, so signalment can very much help differentiate the two disorders.

An ovarian remnant that produces estrogen may also lead to an enlarged vulva, but this disorder is very rare in ferrets in the U.S. In the American pet trade, the methods used to spay ferrets at a young age have all but eliminated the incidence of ovarian remnant disorder.

There are other signs occasionally seen in ferrets with adrenal gland disease. About 30 percent of ferrets with this disease become extremely pruritic and will spend all day (and all night, sometimes) scratching every inch of their bodies. Pruritus can be so intense that areas of the skin become excoriated, especially near the shoulder blades on the dorsum.

Thus, as part of a physical examination in ferrets, always check the area near the scapula for redness as some ferrets will be pruritic with no other signs of adrenal gland disease. Occasionally, a ferret will exhibit behavioral changes and become sexually aggressive towards other ferrets, pets, or even people in the home.

This behavior may include biting the neck of other ferrets or the ankles of people. Since biting is out of the norm for most ferrets, this change in behavior can be quite striking and disconcerting to owners.

Look for these signs

There are two other syndromes associated with adrenal gland disease that are much more serious than cosmetic annoyances, and it is important every veterinarian who may see ferrets as patients be aware of these signs.

In extremely rare instances, the types and amount of estrogen compounds a ferret’s adrenal gland tumor produces causes a severe suppression of the bone marrow and the ferret becomes significantly anemic. Hematocrit values may fall below 20 percent in affected ferrets.

These are true emergencies requiring transfusions and removal of the abnormal adrenal gland tissue for the ferret to recover from this disease. Fortunately, bone marrow suppression is a very, very rare event.

At this point, the ferret may exhibit signs of stranguria, urinating outside the litter box, or just general discomfort. At this early point in the disease process, medications can be used to treat the adrenal gland disease, which subsequently decreases the size of the prostate relieving the pressure on the urethra. However, if an owner does not recognize the changes in the urinary habits of the ferret and the adrenal gland disease is not treated, the prostate continues to enlarge.

You May Also Like  Moving your team from morphing to performing

At some point, the urethral constriction is complete, resulting in a blockage of the urinary bladder. These ferrets need immediate veterinary care once there is a total blockage. Care includes first placing a urinary catheter to relieve the swollen bladder. Then any metabolic derangements should be reversed.

Diagnosis of adrenal gland disease is not difficult. In many ferrets, the diagnosis can be made with just using the signalment, history, and physical examination. A ferret over the age of three with a variety of signs, such as progressive hair loss, sexual aggressiveness, pruritus, and/or an enlarged vulva is fairly pathognomomic for adrenal gland disease. A more detailed work up could include a complete blood count (CBC), a biochemistry profile, and a urinalysis.

In most cases of adrenal gland disease, those diagnostics are within normal limits. If prostatic disease is present, the urinalysis results may show evidence of infection, and there can be a leukocytosis in the CBC. It is rare to appreciate adrenal gland enlargement or mineralization on radiographs. Abdominal ultrasound, in contrast, usually shows a change in the diseased adrenal gland(s); if there is prostatic enlargement, it will be apparent on ultrasound.

The most used class of drugs are GNRH agonists. These include leuprolide and deslorelin. Both are used as long-acting injectable depots. Deslorelin is labeled for use in ferrets in the U.S. as Suprelorin. It is preferred over leuprolide due to cost, availability, duration of action, and the fact it has MUMS labeling. One depot of Suprelorin has the potential to ameliorate signs of adrenal gland disease for up to a year or more.

You May Also Like  Supporting mental health in your practice

Additionally, oral treatments include medications, such as arimidex and flutamide, which are given daily. Melatonin can be administered as an injectable depot or daily oral formulation. Melatonin treatment is less effective than deslorelin and, therefore, is used less frequently.

To operate or not?

In ferrets with only cosmetic changes, there are those owners who chose to not treat adrenal gland disease. If the ferret does not go on to develop more serious complications, this is an understandable choice by a ferret owner.

The prognosis for most ferrets with this disease is very good as most only have cosmetic signs, such as hair loss. Ferrets with prostatic disease can have a good prognosis if the diseased adrenal gland(s) are removed, thereby causing the prostate to decrease to normal size.

Further, in ferrets treated with medications that mask the signs of disease, typically the prognosis is good. The histopathology of the diseased adrenal glands can range from hyperplasia, adenoma to adenocarcinoma. Adrenal gland masses, even those composed of carcinoma, rarely metastasize, therefore, ferrets usually die from a disorder other than adrenal gland disease.

The cause of this disease is not definitively known, although theories have been put forth over the last couple of decades. Research appears to give credence to the theory that neutering destroys a normal feedback mechanism that prevents excess release of LSH and FH.

Once neutered, the increased concentrations of these compounds induce pathologic changes in the adrenal glands potentially leading to adrenal gland disease. Other theories on the cause of this disease include genetic predisposition and exposure to an abnormal light/dark cycle causing disruption of melatonin release.