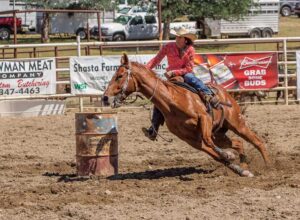 Problems related to equine stifle joints can be frustrating for equine practitioners. When there is demonstrable pathology of one or more of the three joints that make up the equine stifle, surgery may be recommended for treatment of conditions, such as osteochondrosis or tears of the meniscus.

While there are many detailed descriptions of treatment options, surgical approaches, imaging techniques, etc., there are relatively few studies that look at how horses affected with various conditions of the stifle actually do after surgery.

Happily, a recent retrospective case series published in Veterinary Surgery helps shed some additional light on the question, “How do they do after surgery?” The study, conducted at Colorado State University,1 followed 82 Western performance horses that had undergone stifle arthroscopy. In addition to reporting on the outcomes, it also attempted to identify factors that could help predict whether or not horses could return to performance.

One of the things that distinguished this study was the follow up. After reviewing the horses’ medical records, researchers conducted telephone interviews with the owners at least two years after stifle arthroscopy was performed. This sort of follow up is remarkably rare in veterinary medical studies, but it is critically important in helping to advise owners about therapeutic choices. In addition, the researchers analyzed findings before and during surgery—as well as treatments given after surgery—to see if there was any association with return to athletic performance.

Studied horses included a variety of Western performance horse disciplines, including cutting (n = 38), Western pleasure (n = 13), and reining (n = 13). Of the 82 horses, 32 of them—approximately 39 percent—returned to their intended use after surgery. This is in close agreement with the conclusions of a 2009 study on 44 horses in other disciplines with osteoarthritis or intra-articular soft tissue injuries of the stifle.2 In that study, 13 of 44 horses (37 percent) returned to their previous level of performance.

A number of factors were associated with poorer outcomes. As might be suspected, older horses have a decreased chance of returning to their previous level of performance. The degree of lameness was directly associated with the outcome; the worse the lameness, the worse the chance the horse would make a successful return to performance after surgery. The duration of lameness also was an important prognostic factor; the longer the horse had been lame, the less chance he would return to his previous level of performance. Finally, if there were partial thickness lesions of the cartilage noted at the time of surgery, the likelihood the horse would successfully return to work decreased.

Following surgery, any number of postoperative therapies may be prescribed. While the rationale for selecting such therapies is usually understandable (e.g. to decrease inflammation, “protect” cartilage, provide “building blocks” for cartilage) and the motivation for employing them is good, the choice of such therapies seems to depend mostly on the opinions of the prescribing veterinarian(s). However, there is little scientific evidence to suggest any of them make a significant difference in outcomes.

Here is a list of the postoperative therapies used:

In short, none of these commonly prescribed therapies made any difference in whether the studied horses returned to their previous level of performance.

From this and other studies, one can reasonably conclude the prognosis for full return to athletic function after stifle surgery is quite guarded. Less than 40 percent of studied horses in two trials returned to their intended use following stifle surgery.

Additional information obtained during these studies also is helpful. For example, in the 2009 study, there was little association between radiographic score and findings. Commonly used to identify meniscal injuries, ultrasound is fairly sensitive (79 percent of studied horses), but lacks specificity (only 56 percent of horses had the injury/extent of the injury determined by ultrasound).

The studies identified important prognostic factors for outcomes of stifle surgery. Older horses do not do as well as younger horses. Horses with more severe problems do not do as well as those with less severe problems. For example, horses with large meniscal tears are unlikely to return to their pre-injury level of use. Horses that are lamer do not do as well as horses with less severe lameness. Likewise, those with severe radiographic changes are less likely to return to work. This is information that should be conveyed to owners to help them make an informed decision about having stifle surgery performed on their horse.

Finally, these studies indicate that for all the therapeutic options available for postoperative care, both intra-articular and systemic, none of them may be helpful in returning the horse to its previous level of use. While the rationale for such therapies may be good, the reality is that current information would indicate they are likely to be mostly a waste of time and money. While some owners may be eager to do “everything they can” to help a horse have its best chance of returning to function, ethical practice would mandate owners be told current therapeutic options appear to add little to the chance for a complete recovery from stifle surgery. There is no reason to add financial insult to equine injury.