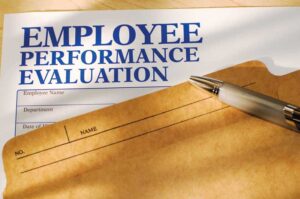 Since buying a practice (five years ago this month!), I’ve learned somewhat about the challenges of practice ownership. To wit, I’ve gleaned the number-one test of my leadership skills (and my sanity) arises from managing humans.

But most of you already knew that. Whether you’re the lowliest kennel worker or the practice owner, you understand these difficulties intuitively. People are problematic. And how well the people you work with do their jobs (and generally conduct themselves) is a hard thing to measure.

Enter the employee review process. Every six to 12 months or so, a slew of people parade through my office. One by one, we review each other (employee to employer and vice versa). It’s a chance for me to listen to what an employee feels are their strengths and weaknesses, areas of growth, hopes for the future, ideas for the practice, and overall assessment of the clinic, as well as their colleagues. It’s also an opportunity to recommit ourselves to the employee handbook and make changes, if needed.

If it sounds really orderly, the truth is, it’s kind of not. Sometimes we cry, sometimes we get angry, and lots of times we wish we
could all get loaded before engaging in this kind of uncomfortable confrontation. Telling the truth is sometimes really hard to
do. And hearing it can be even more deflating, demoralizing, and profoundly discouraging for everyone involved.

The key is to come out of it a stronger team and a stronger practice. But that’s not always a sure thing. Lots can go wrong. With this reality in mind, I thought I’d psych myself up for this month’s festivities with a list of yearly review dos and don’ts for both employees and employers.

DO… force yourself to initiate the review process. Whether you’re the employee or the employer, you need this and you should demand it. It’s not good enough to hold regular team meetings. Some staff members will simply not share their concerns unless they’re treated to a one-on-one session. Others won’t progress if you don’t give them a chance to talk. And most practices won’t ever understand their number-one resource (their people) unless they engage them this way. Employers need to hear the truth every bit as much as employees do.

You May Also Like  Leveling the playing field with cooperatives, GPOs

DON’T… engage in a freewheeling, open-ended share. Both employer and employee should prepare in advance this experiment in mutual assessment. If you’re the employer, offer a worksheet that asks all the right questions. Ideally, both parties should fill out identical forms that review the practice and the employee so you can compare notes and address discrepancies. If your employer doesn’t offer one, bring one anyway so you don’t forget key talking points. You can Google boilerplate employee review forms online.

DO… bring tissues—just in case. We talk a big game about how dispassionate and logical we should be about this process, but in my experience, this is not the industry for it. We care a great deal about our jobs and invest a huge chunk of our egos in them. It’s crazy to expect you’ll never cry during a review, much though we’re told it’s a bad, bad, bad thing and absolutely terrible for your career. Even as an employer, I’ve hit the tissue box a couple of times. So sue me.

DON’T… point fingers unless you’re prepared to walk (or fire). Look primarily to the solution, not the problem. If you can’t find a way out of the box, it’s time to find either another employee (or another job). Pointing fingers without finding remedies is fruitless and sometimes cruel.

DO… take this opportunity to press for a raise or a benefit. If you believe you deserve a raise, speak up for yourself. If your health insurance sucks or your 401(k) is nonexistent, now is the time! If it’s not now, ask when. And on that particular note…

DON’T… pay employees what they’ll take pay them what they’re worth. Nuff said.

Finally, I thought I’d include a note about problem employees or intractable, abusive employers:

It’s not good enough to be “the best” at what you do. It’s just as important to be a kind, compassionate employer or employee who’s willing and able to work with others collaboratively. Which brings us to a crucial issue in employee reviews: self-assessment.

The Dunning-Kruger effect is a type of cognitive bias in which people truly believe they are much smarter and more capable than they really are. Essentially, people with below-average abilities often don’t have the
skills they need to recognize their own incompetence.

This startling bit of well-documented, consistently observed phenomena rhymes with a quote commonly attributed to Mark Twain, “It ain’t what you don’t know that gets you into trouble. It’s what you know for sure that just ain’t so.”

Leo Tolstoy offered a similar bit of wisdom: “The most difficult subjects can be explained to the most slow-witted man if he has not formed any idea of them already; but the simplest thing cannot be made clear to the most intelligent man if he is firmly persuaded that he knows already, without a shadow of a doubt, what is laid before him.”

It’s true; denial of one’s own limitations is a common thread among problem employers and employees alike.

Make sense? Sure. We can all name a few of these people from our veterinary school days.

But it’s worth keeping in mind: Does this also imply that because we recognize this problem in others we automatically perceive ourselves to be in the latter category? Are we as much a victim of overconfidence and fundamental wrongheadedness? Did we just fall into the Dunning-Kruger trap?

The point I’m trying to make (possibly belaboring) is that to engage effectively in the employment review process, it
is very important you keep an open mind. Without one, you might just as well skip this doomed bit of unnecessary confrontation altogether.

You May Also Like  Personal financial health: Index investing 101 for veterinary professionals