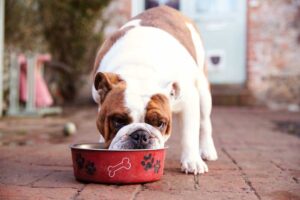 Nutrition for the brain is complex, yet recent research has shown that diets can impact brain function—especially in aging dogs—and also can help manage dogs with epilepsy.

It’s an exciting time for advancements in the area, as research has shown a combination of nutrients that include omega-3 fatty acids, antioxidants, and vitamins also can slow age-related brain function deficits in dogs, according to Dorothy P. Laflamme, DVM, PhD, DACVN, scientific communications consultant for Nestlé Purina PetCare Research.

Aging changes and disease states can cause oxidative damage and accumulation of beta amyloids (similar to Alzheimer’s disease in people), according to Evelyn Galban, DVM, MS, DACVIM, associate professor of clinical neurology at the University of Pennsylvania School of Veterinary Medicine.

“To help with these conditions, we can provide nutritional therapies, including antioxidants such as vitamin E and C, L-carnitine, DL-lipoic acid, and fruit and vegetable extracts; carotenoids such as beta carotene, combined with certain minerals such as selenium; and fatty acids such as docosahexaenoic acid (DHA) and eicosapentaenoic acid (EPA),” Dr. Galban said. “Older dogs given this nutritional therapy, including these supplements in a formulated diet, showed improvement in learning and spatial attention within two weeks.”

MCTs also may have direct anti-seizure effects by blocking receptors in the brain, Galban added.

Sarah Moore, DVM, associate professor of neurology and neurosurgery at The Ohio State University College of Veterinary Medicine department of veterinary clinical sciences, said that from a neurologic perspective, discussions have centered most recently on the role of MCTs in treating epilepsy.

“When pets older than seven years of age develop epilepsy, there is most often an important underlying problem, such as a brain tumor, stroke, etc.,” Dr. Moore said. “We don’t usually see the more routine genetic type of epilepsy show up that late in life, so older animals with a new onset of seizures should always be evaluated by their veterinarian to look for more serious problems.”

To manage a dog’s central nervous system function, there are two factors to consider—stimulation and nutrition, said Dr. Laflamme.

“As with other parts of the body, such as the bones, muscles, and GI tract, the brain responds to the ‘use it or lose it’ standard,” she said. “Mental stimulation encourages enhanced brain function and slows cognitive losses. For dogs and cats, this is achieved through environmental enrichment and interactive activities.”

The brain uses a inordinate amount of energy, and most of it is in the form of glucose. Brain cells absolutely require a constant source of glucose through other energy sources—primarily ketones—but lactate and medium chain fatty acids also can substitute for a portion of the glucose.

For example, the metabolism of people undergoing extended starvation shifts to burning body fat and producing ketones from these fatty acids. In that situation, ketones can provide up to 75 percent of the energy for the brain.

“In addition to energy needs, the brain requires vitamins and minerals as cofactors to facilitate metabolism and neurotransmission, amino acids to support production of neurotransmitters, and fatty acids for nerve structure and function,” Laflamme said. “Specifically, the brain needs both arachidonic acid (an omega-6 fatty acid) and DHA (a long-chain omega-3 fatty acid). Finally, an adequate source of antioxidants is critical, especially since aging is associated with an increase in oxidative stress.”

A diet for optimal neuro health must provide complete nutrition, though an “ideal” nutrient profile may differ based on the species and age of the individual, Laflamme said.

For example, a source of DHA is important during fetal development and in the early neonatal period. In aged individuals, other nutrients may be of particular importance.

“The aspects recognized in recent years focus on the ability of dietary nutrients to manage age-related changes in the brain, specifically a reduced ability to metabolize glucose, leading to functional energy deficits; an increase in inflammatory mediators, which can be managed, in part, via the long-chain omega-3 fatty acids EPA and DHA; and an increase in oxidative stress, which can be managed through additional antioxidants,” Laflamme said.

Other nutrients that also may be beneficial are increased B vitamins, which are critical cofactors for energy metabolism, and arginine, which plays a role in nitric oxide production and blood flow regulation (among others).

For general health, a diet should be balanced and contain the minimum amounts of fats, carbohydrates, protein, and micronutrients (vitamins and minerals) for that particular species, according to Sheila Carrera-Justiz, DVM, DACVIM, service chief, neurology and small animal medical director at the University of Florida College of Veterinary Medicine.

“It’s also important to remember cats are obligate carnivores, meaning they will get sick if they’re fed a vegan or vegetarian diet,” she said. “Dogs are omnivores like we are, but they do have specific nutritional requirements. There actually is literature coming out that dogs being fed gluten-free diets are developing severe cardiac disease. Remember, dogs are not small humans.”

It has been known for decades that ketogenic diets can help human patients with epilepsy, especially those who don’t respond adequately to drugs alone. However, these diets are very high in fat, low in carbohydrates, and low in protein—so not ideal nutrition.

“Dogs metabolize dietary fats more efficiently than do humans, so traditional ketogenic diets are not effective at inducing ketone production in dogs and are therefore of little or no value for epileptic dogs,” Laflamme said. “A new discovery is that dietary MCTs can stimulate ketone production in dogs, and it is recognized that the fatty acids from MCTs also can cross the blood-brain barrier and may be helpful.”

One recent clinical study showed dogs with drug-resistant epilepsy (meaning not adequately controlled via drugs alone) improved when an MCT diet was added to their treatment regimen.

“While the available evidence does not support the idea this diet works for every pet with epilepsy, a small subset seems to show an excellent response,” Moore said. “It’s intriguing and is an area where more research is needed.”

Controlled studies looking at dogs and specific diets are just starting to be performed like the 2015 paper looking at MCTs. This diet is considered an add-on therapy in dogs that do not respond adequately to traditional medications and is not currently recommended to replace anti-epileptic drugs, said Dr. Carrera-Justiz.

An eye on older dogs

It’s important to remind clients that whenever a pet shows a substantial or sustained change in its behavior or activity level, it’s time to visit the veterinarian.

“Some changes in behavior and activity can be a normal part of the aging process, but often, owners assume problems are just old age when there may be something else going on,” Moore said. “We can help you determine whether the issue is a symptom of something more serious.”

It’s also important these dogs see a veterinarian because there are many reasons for behavior changes associated with aging—some neurologic and some not, Carrera-Justiz said.

“Canine cognitive dysfunction (CDS) is basically age-related cognitive decline typically seen in geriatric dogs,” she said. “However, it’s very important to make sure these dogs don’t have a systemic illness, like high blood pressure, that’s making them act differently. It is also important to ensure they don’t have something more serious like a brain tumor. There is a lot of material out there about this, some legitimately studied and a lot not.”

As for treatment of CDS, a few things have been studied, but it’s not a curable condition—you manage it, Carrera-Justiz said. For example, one prescription drug, selegiline, can help reduce signs in about half of dogs affected.

Omega-6 fatty acids are essential for normal brain function, as is the long-chain omega-3 DHA. The other long-chain omega-3, EPA, may be providing a benefit in aging brains due to its anti-inflammatory benefits, Laflamme said. These n-3 fatty acids must derive from fish oil and not from flax oil—adult dogs and cats cannot efficiently convert the shorter n-3 to the necessary amounts of EPA for anti-inflammatory benefits.

“Organ meats can be a good source of vitamins and fatty acids, as well as proteins, amino acids, and essential minerals, but
I am not aware of any particular benefit provided relative to brain function,” Laflamme said.