Let’s face it; we can’t even keep up with all the email, client communications, and news flashing on our smartphones while maintaining a busy clinical load. Once-a-year continuing education barely keeps us afloat in the ocean of veterinary information, and now that information—thanks to accelerating advancements in technology and biological research—is coming at us more and more rapidly and in more forms.

It gets worse (which, thankfully, translates to a better future for veterinary medicine). Scientific research is amassing information that is so small on a molecular level and so voluminous on a digital level that the analytical capabilities of researchers cannot, at present, keep pace. And much of the data being generated come in the form of “-omics,” the names of which also are budding like yeasts.

We were okay with the genome. The idea of identifying all of the estimated 20,000 protein-coding genes that make up a human (and now a horse, a dog, a cat, and more than 100 other vertebrates) was intriguing, if a bit esoteric. The link between the genome and medicine was about understanding and treating genetic diseases.

But next came the transcriptome: rapidly advancing nucleotide sequencing technologies that now allow researchers to characterize an organism’s messenger RNA (mRNA), the go-between in translation of DNA to protein. And, naturally, the proteome followed. As many as 100 different proteins can result from the translation of any single gene. The human metabolome is comprised of the more than 50,000 small molecular metabolites found in the human body, and its online database contains more than 100 clinical data fields per metabolite entry. And then there’s the microbiome—the collection of microbes in a given environment (for instance, organ system) and their genes. Thanks again to new DNA sequencing technology, scientists have discovered that 99 percent of microbes have not been cultured previously in vitro, leading to the discovery of entire new families of microbes and the ability to classify them, count them, and even identify their unique functions within the body.

The result of these rapidly expanding datasets is bioinformatics: the science of collecting, storing, and making sense of the trillions of data points generated by these emerging molecular analytics. The potential for medical advancement utilizing bioinformatics is nearly unimaginable; computers have the capability to find, at the very simplest level, commonalities among the different “-omes” to eventually link a gene, its transcript, the protein it encodes, and the metabolic process that the protein catalyzes. From a medical standpoint, this means that researchers will be able to pare down a disease to its most basic pathophysiology, leading to precise and personalized diagnostics, therapeutics, and prevention. Unsurprisingly, this field is now the primary focus of the pharmaceutical industry.

But wait … there’s more! The future of medicine in micro RNA

Seriously … it gets smaller—and more voluminous. Recently, scientists have discovered that tiny, noncoding pieces of RNA, micro RNAs (miRNAs), are responsible for regulating what and how genes are expressed by blocking translation of mRNA to protein. Each miRNA can regulate the expression of many genes, and each of the body’s 200-odd cell types has a unique miRNA profile.

“Diseases, particularly genetic, metabolic, degenerative, and neoplastic diseases, each have a distinctive miRNA signature,” said Tom Rosol, DVM, Ph.D., DACVP, former professor of veterinary pathology at The Ohio State University College of Veterinary Medicine and now chairman of the Department of Biomedical Sciences at the Ohio University Heritage College of Osteopathic Medicine. “As diagnostic markers, you can find them in blood, urine, or tissue, providing early identification of disease risk. As therapy, we’ll be able to use them to regulate a family of genes and change the course of disease.”

Good news for cats: The building blocks for diagnostics, therapeutics

Dr. Rosol and his colleagues recently sequenced and described the 475 miRNAs in the domestic cat—that’s right, the cat microRNAome. Many of these miRNAs are conserved between cats and other mammals, such as humans, enhancing the cat’s role as a unique model of many human diseases. About 100 of the sequences, however, are exclusive to the cat and many are tissue specific. By tapping into this online resource of sequences, and better understanding function and dysfunction of miRNAs, future researchers will be better able to predict the incidence and progression of many diseases, as well as eventually develop new interventional and preventive strategies.

“These are baby steps,” said Rosol. “We had no idea, for instance, what miRNAs are important in the kidney, the cerebellum, the liver, and 11 other tissues in the cat. Now we do. ”

The methodology employed by Rosol and his colleagues is an example of a “bottom up” approach to clinical bioinformatics. By creating catalogs of molecular codes, bottom-up bioinformatics provide resources to make connections between different systems that eventually lead to disease pathophysiology. Conversely, a “top-down” approach starts with a disease state and looks for commonalities in the bioinformatics catalogue to derive causation.

Molly McCue, DVM, MS, Ph.D., DACVIM, associate professor of veterinary population medicine at the University of Minnesota College of Veterinary Medicine, uses top-down bioinformatics to understand equine disease. Dr. McCue is seeking the molecular foundations of diseases as complex as equine metabolic syndrome (EMS)—an endocrine disorder associated with obesity, insulin resistance, and laminitis in horses and ponies. Studies have found EMS to be associated with physiologic features, including overfeeding, simple carbohydrate intake, and lack of exercise, but McCue and her colleagues have found that there is a heritable component to a horse’s susceptibility to this disorder.

You May Also Like  Research updates on diet-associated dilated cardiomyopathy

While McCue’s research has identified more than 3,000 genes associated with EMS, she is currently using network analysis—a sort of computational “six degrees of Kevin Bacon”—to link this genome subset with the serum metabolites of affected horses (the metabolome) and gene expression in muscle and fat (the transcriptome) to narrow the list of suspect genes and clarify their role in the disease.

“By understanding the genetics and pathophysiology of EMS, we can identify high-risk individuals that would benefit from management changes and discover new pathways to therapeutic intervention,” McCue said.

Canine cancer is estimated to affect one in every three dogs and remains one of the leading causes of death in companion animals despite advances in conventional therapies. Because the pathophysiology of cancer is linked to alteration of cellular gene expression, the bioinformatics toolbox promises to offer countless molecular insights into mechanisms, diagnostics, and new medical interventions for cancer.

In dogs, osteosarcoma (OSA) continues to claim the lives of 85 to 90 percent of its patients within two years of diagnosis, despite aggressive surgery and chemotherapy. In the case of OSA, mortality is more often due to metastatic disease than to the primary tumor. By studying the transcriptome of bony tumors, researchers have found a potential therapeutic target for OSA. It turns out that OSA cells express a receptor, termed her2/neu, on their surfaces; metastatic cells express the receptor at higher levels than primary tumor cells.

While her2/neu is not a fundamental driver of the neoplastic process in OSA, for Nicola Mason, Ph.D., BVetMed, of the University of Pennsylvania School of Veterinary Medicine, it provides a target for immune-mediated therapy. Dr. Mason has created a highly attenuated recombinant Listeria monocytogenes vaccine, which primes and expands the immune response to the her2/neu receptor, resulting in destruction of receptor-bearing OSA cells. In a phase I clinical trial of the new vaccine, the mean disease-free interval was more than 18 months in treated dogs, and overall survival at three years was 56 percent—a significant improvement over historical OSA treatment outcomes.

“Immunotherapy is still a developing science even in human medicine, but its potential to advance our success in treating cancer is really fantastic,” Mason said.

While each of these cases describes a current approach to implementing bioinformatics for the advancement of veterinary medicine, there is no doubt that the most important discoveries to come from bioinformatics remain to be realized. Data generation in the “-omics” fields is outpacing our ability to make sense of the escalating networks of biological connections, and specific analytical expertise is in short supply.

“If we didn’t have a bioinformatician at our side throughout the process to analyze and interpret these data, it would never have happened,” Rosol said, in regard to the description of the cat miRNAome. “You take it for granted that someone will be available to help you with the analysis, and that’s not correct. I now understand the depth of the problem.”

One future-focused project aimed at understanding canine cancer is the Morris Animal Foundation’s Golden Retriever Lifetime Study. This longitudinal study, initiated in 2012, began with more than 3,000 golden retrievers, their owners, and their veterinarians, who patiently record pages of information about the nutrition, medical history, and environmental exposures (wait for it … the exposome) of their dogs throughout their lives. Every year, the dogs visit their vet and donate blood, urine, feces, hair, and toenails to a growing biorepository. These samples will be used to generate bioinformatics, which will be uniquely paired with nutritional, lifestyle, and environmental exposure data, with the aim of identifying risk factors for cancer in dogs. Currently in its fifth year, this 14-year study relies on the fact that powerful new bioinformatic technologies and discoveries will be developed during the course of the study, and computational analytics will employ these vast networks to create new understanding, diagnostics, and canine cancer treatments.

The studies described above are being undertaken by veterinary researchers, all funded by the Morris Animal Foundation, whose passion is to improve animal health and well-being. Behind the impassive veneer of advances in biologic and computational science forever remains the human element. We, as veterinarians and scientists, have the task of deciphering this new information for our clients so that they understand what it means for their animals, as well as the pleasure of applying new science to save beloved lives. We remain the translators. 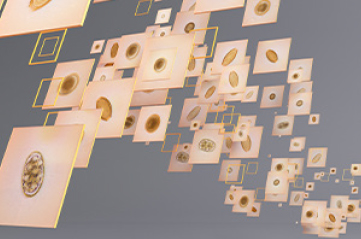