When was the last time you looked at the side of a bag of pet food? Have you ever examined the recommended portion section? If you have, you will know commercial pet food labels prescribe portion sizes that are often well beyond what most of us would recommend.

In my experience, it is this portion size—right there in glossy black and white—that trains owners into over-feeding pets from the very first day they are in the home. As veterinarians, we can play referee and redirect owners toward more appropriate volumes (after explaining why “conservative” recommendation guidelines are included on pet food labels), but how often are we afforded this opportunity in the course of a 20-minute exam?

For pediatric patients it’s not so problematic, of course. However, once puberty, sterilization, and a bevy of breed and activity issues are factored into the mix, the disparity between label recommendations and reality becomes almost chasmic for many of our patients.

The result is a setup for obesity. We are on the back foot on day one. What’s more, playing catch-up means feeding even less than what pet owners have been trained to consider minimal sustenance.

Part of the problem

To make matters worse, the fact our recommendations seem so abstemious relative to pet food labels undercuts our authority across the board. No owner wants to feed an obese bulldog a scant cup of kibble a day. Even suggesting it takes us down several pegs in a pet owner’s estimation.

Maybe that is why, as a profession, we’ve done so little to address the glaring affliction plaguing a broad swath of domestic pets. By accepting those calculations used for decades, we have effectively allowed industry to dictate terms in an area that, by rights, is our exclusive domain.

Sure, there are some caveats on most labels, but there are no ranges, no explanations, no allowances for sterilization status, breed type, current body condition score, or activity level. It’s just X amount per X-lb pet. As if it makes any sense that increasingly overweight pets should require food as they get fatter and fatter. I think it works because when you read the bag label it has a table veterinarians are familiar with. It says that 20-lb pets need X amount. So, if a fat pet weighs 25 lbs, the amount is X+5. Make sense?

Our collective silence on this obvious point of discrepancy is maddening to me. While this issue is clearly under the veterinarian’s purview, it is crickets on the subject of obesity.

I guess that is because it’s easier to assume our “food is love” culture extends to our animals and the obesity epidemic is a purely cultural phenomenon, just as it is in humans. However, to me that is like saying McDonald’s and Coca-Cola have zero influence on the American waistline.

I liken it to when Paula Deen tried to hawk diabetes drugs after telling us for decades butter really wasn’t that bad for us. 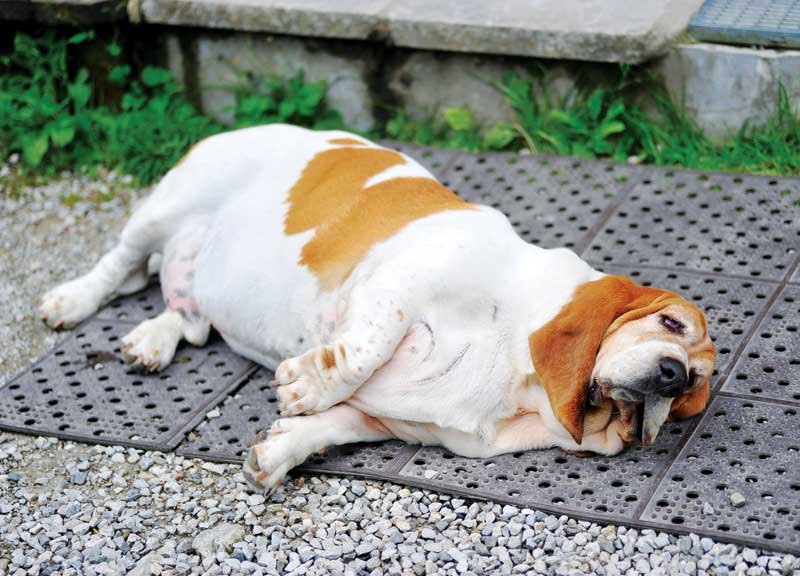 Indeed, perhaps it is just easier to blame it on the one who wields the bag. What is it they say? “Guns don’t kill people…people kill people.” That old ditty comes to mind here.

There is a long history of veterinarians assisting in pet nutrition. Since its earliest days, the two have worked collaboratively to make pet food safer and healthier. In many ways, it was the pet food industry that made healthy pet keeping possible at scale. For that we thank them. However, we now have food-related issues we need to tackle together, as well.

There is a history of that, too. After all, we famously worked together after 2006’s pet food recall. We later lobbied for calorie counts on labels. Why can’t we get serious about labeling and help companies manage what could be considered an inherent problem? What is it going to take? Nonveterinary consumer action? Now, wouldn’t it be embarrassing for veterinarians if some consumer advocacy lawyers made said businesses come to heel on an issue we didn’t even raise?

Now, I know what you are thinking. There is a lot more going on here than just some recommendations on labels. It is about more than just some 100-year-old science on caloric requirements. No, it is also about what we’re willing to do and say in the exam room…and about personal responsibility at the level of our clientele.

Ultimately, we do have some influence over our patients’ dietary intake, and if we don’t exercise it, that’s on us. However, it is my opinion that unless we are willing to take this fight to the highest levels, we’ll be losing the war on obesity no matter what we do or say as veterinarians. After all, I only have so many hours in the day to dedicate to explaining why someone’s bulldog needs only a cup of food when the bag says he needs four. What’s more, given that disparity, I find it hard to blame the bulldog owner for deciding to feed two instead.