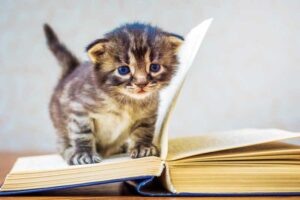 Some would argue (and I’m one of them) that kitten socialization classes are the most unrecognized program out there for cats. In fact, by running them, clinics may even save cat lives by increasing feline veterinary visits. You’ll recall I teased this concept in my column appearing in the May issue of Veterinary Practice News.

The idea started about 20 years ago in Australia with Kersti Seksel, BVSc (Hons), MRCVS, MA (Hons), FANZCVS, DACVB, DECAWBM, FAVA (boarded in behavior in the U.S., Europe, and Australia). “It all began when my clients in puppy classes wanted equal attention for their cats. Kittens deserve an education, too,” she says.

Dr. Seksel’s Kitty Kindy classes took off instantly Down Under, but were about as popular in the U.S. as Vegemite (a peanut butter-type spread well-liked in Australia, but detested by most Americans). Now, it’s all changing in the U.S. (not for Vegemite, but for kitten classes). Millennials are particularly attracted to the idea of taking these classes, which is good news because veterinary nurses are particularly interested in teaching them. Research from the Human Animal Bond Research Institute (HABRI) and various other sources demonstrate millennials have shown a general willingness to try new ideas, especially when it comes to cats. After all, this is the cat café generation. Kitten classes typically comprise two one-hour sessions or one 90-minute class.

An idea that made sense

I first heard about kitten classes back in 2004 as a participant/speaker at North American Veterinary Community’s (NACV’s) postgraduate institute. A light bulb went off instantly in my head when Seksel described her Kitty Kindy classes.

Back then as now, cats were woefully under-medicalized. There are a lot of reasons for this. Here are two biggies:

1) Getting cats to the veterinarian can be nearly impossible for some owners. The carrier comes out, and a mad dash ensues around the house to stuff the protesting cat into the carrier.

2) Clients feel guilty about putting their beloved kitty through the ordeal, which gets even worse as the cat’s anxiety and sheer terror go off the charts by the time they reach the exam room.

Based on the last studies conducted, cats, on average, visit the veterinarian less than half as often as dogs. Yet, there are about 20 percent more cats kept as pets compared to dogs.

I knew if we could get cats to hop willingly into their carriers, to not be upset about the car ride to the clinic, and to tolerate the exam (maybe even enjoy it), more clients would be willing to see their veterinarians for preventive cat care. And if that happened, cat lives would be saved.

So, with Seksel’s blessing and using her curriculum, I began to teach kitten classes in various places in Chicago, from a public library to a bank (after business hours) to a dog wash facility. (The latter may seem a strange place to hold one of these classes, but associating the sound of barking dogs in the next room with a positive experience is a good thing for kittens.)

Ideally, though, these classes should be held at veterinary clinics for many reasons. The first is, kittens are positively exposed to the sights and smells of a veterinary clinic and a mock exam. And, as a by-product, clients become bonded to the clinic. The kitten class instructor—most often a veterinary technician or nurse—becomes a resource to the owner when something does ultimately happen years or months later, such as when a cat begins to urinate outside the box or scratch the furniture.

It’s not all fun and games

And it turns out when kittens are outside their carriers (which happens once or twice only briefly during the classes), the vast majority are more interested in interacting with cat toys or humans than with other kittens.

One of the challenges of the kitten class is to enroll only kittens that are eight to 15 weeks old (although exact ages of kittens are often unknown). If kittens are older than this, their hard-wired territoriality kicks in. This could be problematic, given the goal is for them to experience the event as a positive experience while they are little sponges.

Thankfully, so many kittens these days are adopted from shelters, and many have on-staff veterinarians who examine the kitty upon adoption. Based on this, the pet parent believes there is no real need to see a private practitioner. That’s unfortunate; however, it adds even more weight to the value of Kitty Kindy classes. In fact, I suggest veterinary clinics partner with an animal shelter on the kitten classes. This allows the shelter to recommend the classes to kitty’s new owner, bonding them to the clinic.

Kitten classes also teach clients basic kitten care, from clipping the cat’s nails to appropriate ways to play with them (e.g. not using your fingers as a cat toy). The late Sophia Yin, DVM, MS, once suggested cat owners use a pill dispenser to periodically feed their feline tuna or moist food. Years later when a pill is required, the cat is more likely to accept it with the tuna or moist food, all from the pill dispenser. Since behavior problems are so common, prevention is a major focus of kitten classes. Topics include how to encourage cats to scratch in all the right places (possibly preventing declawing), as well as feeding behavior and enrichment.

There’s even a lesson in how to teach kittens to do amazing tricks, such as responding when called. Kathy Rupnel, a graduate of one of my Chicago kitten classes, says, “I can’t believe it. I actually learned how to teach my cat to come to me when I called her.”

An overriding message conveyed to pet owners is that anytime you note a change in your cat’s behavior, contact your veterinarian (not Google).

For more about kitten classes and the curriculum, see a chapter written by myself and Seksel in, The Cat: Clinical Medicine and Management (edited by Susan Little, DVM, DABVP). The book’s newest edition comes out next year.