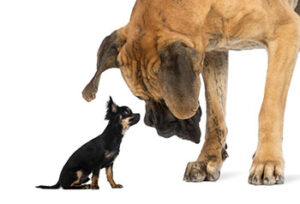 According to a new international survey, dog owners say they are more satisfied owning large dogs than small dogs.

The study, conducted online by RightPet starting in 2010 to 2018, surveyed dog breed reviews from 12,167 pet owners from 106 countries. Seventy-five percent of the reviews were of purebred dogs; 25 percent were of mixed breeds.

The study found that both women and men are happier owning large dogs than small dogs and that men and younger people are significantly more satisfied with medium, large, and giant breeds, and less satisfied with toy and small dogs. Older people (around age 70) were found to be equally satisfied with dogs of any size, though dog owners with experience owning multiple dogs of different sizes report the greatest satisfaction with large dogs.

“What our study has found is that large dogs score higher in traits that are really important to most dog owners,” said Brett Hodges, owner/editor at RightPet. “People don’t prefer large dogs per se—they like them because, in general, they’re more even tempered, trainable, and quiet than small dogs, making them ‘best in home.’”

VetTools POP
Enhanced client feedback for a stronger practiceThis revolutionary client feedback system, sent automatically via SMS or e-mail, is a hybrid of post-visit surveys and...