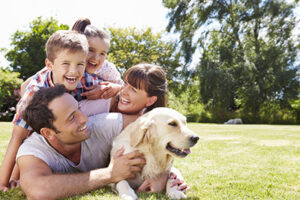 Pet owners spent $69.5 billion on their companions in 2017, according to the latest figures from the American Pet Products Association (APPA). Pet food accounts for the single greatest source of spending, veterinary care spending remains the second highest at $17.07 billion, up 7 percent from 2016.

“It’s incredible to not only see growth for the pet industry in general, but also to experience growth across all categories—with the exception of live animal purchases, which remained the same,” said Bob Vetere, APPA president and CEO. “Talk to any pet owner and they’ll tell you how difficult it is to put a dollar limit on what they’d spend to give their loyal companion a happy life, and it’s this outlook that continues to drive growth.” 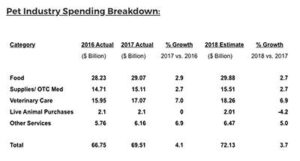 Spending on pet food continues to be the highest source of dollars spent, with spending on dog food specifically making up a majority of sales. Interest in high-end, premium pet food and treats continues to be a key driver for increased spending in the pet food category, but as owners increasingly value shop for these items, total food spending growth continues to slow down.

Veterinary care spending remains the second highest source of spending in the pet industry at $17.07 billion, up 7 percent from 2016. A 6.9 percent growth is anticipated in 2018, exceeding growth estimates for any other category, putting veterinary care spending at over $18 billion by the end of the year. As shown by research identified by the Human Animal Bond Research Institute, the positive impact of pet ownership on human health is having a positive impact on the overall industry especially as relating to the direct health care of our animals.

The third highest source of spending is in supplies and over the counter (OTC) medications. Approximately $15.11 billion was spent on items such as beds, collars, leashes, toys, travel items, clothing, food and water bowls, and other accessories in 2017. The use of pet medications and supplements to ensure longer, healthier lives for pets is increasing thus somewhat offsetting any lower income for veterinary services. Pet technology products also are extremely popular in terms of product innovation for pets, but not yet a big market share in terms of sales, although it is growing.

The category that saw one of the highest growth percentages this past year was other services, which includes pet services outside of healthcare such as grooming, boarding, walking, training, pet sitting, yard services and more. Coming in at $6.16 billion in 2017—up 6.9 percent from 2016—spending on pet services continues to be an exciting and promising segment of the industry.

Live animal purchases, for the first time in four years, has not declined, but rather remained steady at $2.1 billion spent.

“The industry is moving beyond simply the humanization of pets to where they are now widely accepted as part of the pet owner’s lifestyle,” said Vetere. “No matter the primary cause of increased spending on pets, be it enhanced nutrition, better healthcare, increased pampering, or greater technology, the one thing we know for sure is that pet owners have a top priority in pursuing longer, healthier lives for their pets.”