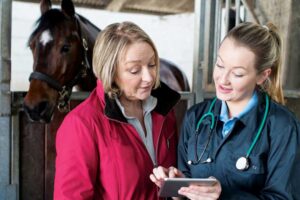 Most horses will need to be dewormed occasionally. Happily, there are a number of reasonably effective and very safe products available. Unfortunately, there also are quite a number of strategies and products that don’t work at all. While it may seem obvious that those should be avoided, nevertheless, some may have a vocal and ardent following.

One problem that may be faced by some equine veterinarians is client chemophobia. To a chemophobe, all chemicals are bad. In the thesaurus of those who fear chemicals, the word “chemical” is a synonym for such words as “hazardous,” “toxic,” or “artificial.” As a dewormer is a chemical, it’s also bad: bad for people, horses, the environment, and just about anything else that comes to mind (including parasites, too, one would think). While a chemophobe may love her horse enough to try to control parasites, she also wants to keep from chemical exposure, too (never mind if the chemicals are safe and do their job).

The problem, insofar as killing equine internal parasites goes, is that there’s no effective way to kill parasites without chemicals. It is certainly worth taking steps to control parasites nonchemically, such as removing manure from pasture and not spreading horse manure as a fertilizer on horse pasture. However, in spite of those efforts, parasites persist, hence the need for occasional deworming. Nevertheless, those who are averse to the use of chemicals will look for something else—usually something that’s labeled “natural” or “alternative.” Unfortunately, this can be to the detriment of the horse.

Those looking for natural alternatives may (correctly) observe that internal parasites do not seem to be the problem in wild horses that they are in domesticated ones. However, wild horses aren’t confined to fenced pastures where fecal matter can accumulate. In the wild, it can be difficult for the parasite life cycle to propagate, as horses range far to get their nutrients. In addition, horses also develop a reasonably effective natural immunity to parasites.

You May Also Like  A new way to go green: mentor a recent graduate

Below are the nonchemical methods through which owners might believe they are keeping their horses parasite free.

Of course horses should get the best quality feed available. Unfortunately, good health and good nutrition are not barriers to internal parasites.

Many colorfully packaged “natural” products exist on the market. They all seem to have one thing in common: There’s no evidence they do anything to prevent infections by internal parasites in horses. Here are some examples:

Pumpkin seeds. While pumpkin seed meal did help control parasites in ostriches in one study, they never have been tested in horses.

Carrots, turnips, or beets. Horses love them and are regularly fed them in countries other than the U.S.; however, they are useless for parasite prevention.

Garlic. In the horse world, garlic seems to be something of a universal remedy. For example, it is also purported to be a tick repellent (it doesn’t work). Garlic has not been shown to be effective in parasite prevention in horses, and it failed to have any effect at all on ascarid infestations in people. Many horses even seem to like garlic; however, in excess, garlic can cause Heinz-body anemias.

Bacterial supplements. The horse’s gut is full of bacteria. Feeding more won’t bother parasites at all.

Wheat bran. Some people have asserted that wheat bran helps carry worms out of the horses like some sort of intestinal bellhop. However, good research has shown that bran does not change the character of the horse’s feces. Nor does bran prevent colic.

Wheat germ oil. Adding it to feed may be said to “discourage” tapeworms. It is ineffective.

While herbal preparations are commonly found in convenient buckets in many places around the world, plants are fed to horses and other large animals in an effort to control their internal parasites. In these regions, plants are accessible, easy to prepare and administer, and cost very little. Unfortunately, there’s no evidence that they control internal parasites. Even so, researchers in British Columbia, Canada, found that people use 19 different plants to try to control poultry parasites and 11 in rabbits.

You May Also Like  Do this to get immediate revenue

New deworming products are sorely needed, and especially with the increasing problem of parasite resistance. In fact, with herbal preparations, there is some preliminary evidence primarily in vitro to indicate that some herbal and botanical products have some activity against parasites. For example, one report states that micronized onions and coconut pulp help reduce parasite load in horses. While the research may be interesting, the application is impractical. Commercially available prepared herbal dewormers generally have a combination of ineffective or unproven ingredients.

Since its inception, homeopathy has been lampooned by many medical scientists. There is no credible evidence that homeopathy is an effective treatment for anything, and it is certainly not an effective way to control equine internal parasites.

Volatile (essential) oils are concentrated liquids derived from plants that contain aromatic compounds. Examples of plants containing volatile oils include garlic and citrus. In people, it’s generally advised that essential oils never be used internally; it is reasonable to think, particularly in the absence of studies indicating efficacy, that they would be contraindicated in horses, as well.

Diatomaceous earth (DE), the fossilized remains of diatoms, is a type of hard-shelled algae. DE feels abrasive. It’s made up of about 80 to 90 percent silica, which is the same chemical that makes up sand.

Used in gardens, diatomaceous earth absorbs oils and moisture from the external skeleton of insects and dries them out, killing them. However, in order to work it must be dry, a condition that could not be achieved inside a horse. Nevertheless, proponents of DE maintain the particles have spiny edges that pierce the parasite’s outer layer.

There have been a few studies using DE to try to control parasites, and the results have been pretty unanimous. Studies in goats, cattle, and sheep all have shown it is ineffective in parasite control. Good studies have not been done in horses.

You May Also Like  Preventing a financial emergency: Talking to your clients about cost of care

Clients who are intent on using a natural deworming product in spite of all of the caveats and information showing that most just don’t work should be advised to at least also occasionally have a fecal exam performed.l

As a veterinarian, you feel every emotional ripple of heartworm disease. The pain and suffering of your canine patient. The anguish and concern of your client. And of course, the responsibility and emotional drain as you treat the disease.
+ Learn More