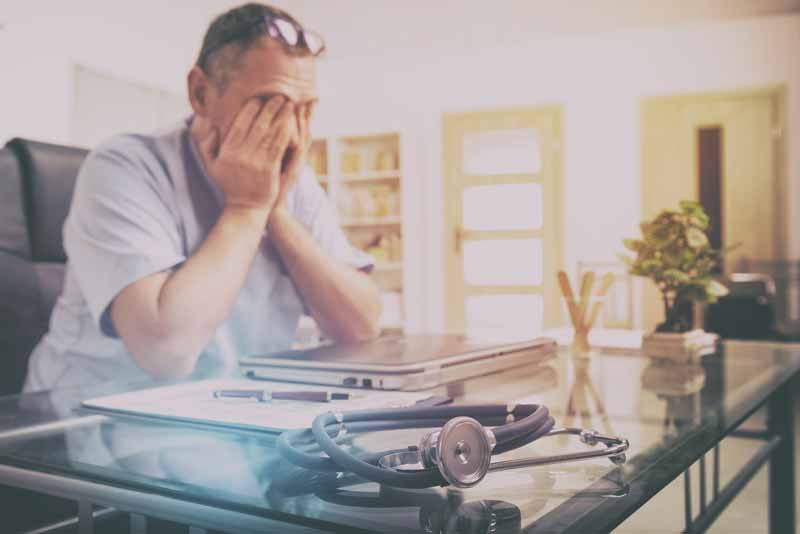 I’m one of those people who lurks in the margins of vet-slash-med information platforms like KevinMD, VETGirl, and the vet-only Facebook page, Not One More Vet. I scour the posts and occasionally force myself to read the comments that treat the subject of addiction, recovery, and suicide prevention with an eye toward a greater understanding of my colleagues.

Over the past couple of years, however, I’ve gradually stopped reading mental health-themed social media outside my immediate circle of self-curated content. It’s not that it’s too much of a trial to read the first-hand accounts of sufferers and imagine their anguish as they navigate the turbulence of their own pain. It’s not even that I’d come across too many statements pertaining to the politics du jour (I avoid those like I would a drunk bat in daylight). It’s more that I can’t handle the comments of an almost universally well-meaning public as they try to help … and often fail spectacularly.

Despite my reluctance to participate in this conversation, I still believe in the saying that if you’re not part of the solution, you’re part of the problem. Hence, this article, in which I attempt to offer some of my own perspective, gleaned from decades of painful personal experience.

Our profession has a serious concern—one that’s typically characterized in blanket terms as a “suicide problem.” But it’s not really. Suicide is only the tip of the iceberg. The larger problem isn’t that a bunch of us kill ourselves every year; it’s that a huge percentage of us are sick in ways that huge swaths of the rest of us can’t fully fathom and frankly don’t want to.

Despite all our summits, committees, and conferences, there’s no subject that continues to be more misunderstood by the veterinary profession. It’s almost as if there’s a good old-fashioned, American-style language barrier in the way.

Consider this: As with most language divides, stateside, you’ve got several categories of people. You’ve got the native speakers, the nonspeakers, and a smattering of well-versed, conversational crossovers. The rest may know enough to read a menu or offer much-needed, compassionate words in a time of crisis, but not always enough to cross the chasm.

You May Also Like  Boosting care and profit with new tech

In our collective consciousness, the chronically or severely depressed and anxious make up the bulk of this category. They’re the family members, friends, and colleagues we’re more likely to know, understand, and identify with—somewhat. Most of us have been there at one point or another, though to a different degree. These are common enough human emotions, after all.

Back to the metaphor: Imagine that the language in question were viewed by nonspeakers as an arcane dialect spoken exclusively by a small number of weak-willed, parasitic people who indulged their craven desires impulsively in spite of the consequences for themselves, their families, and their patients. Now who’d want to speak that?

Such are the stigmas and biases borne by the class of individuals known variously as substance abusers, addicts, and alcoholics.

Unfortunately, a lot more people than you think speak this language fluently. Some of them don’t even know they do (though they may suspect it at times), including plenty of veterinary professionals who probably don’t share a “weak-willed” bone among them. Yet they’re all subject to this widely held prejudice, one based on the fact that substance abuse is a failure of character and not the result of aberrant neurotransmission.

Here’s where I explain what you may not be fully aware of: Though its mechanisms and pathways are poorly understood, addiction is fundamentally considered a neurochemical disorder. While medicine is almost completely united in its acceptance of addiction as a disease, this message has not been effectively transmitted to the human population at large.

Indeed, members of both human and animal medical communities seem ignorant of this well-understood fact. To wit, treatment among physicians and veterinarians is largely punitive (geared toward license revocation in its earliest, most sensitive stages), and decades into the scientific understanding of the disease concept for addiction, mutual support among veterinary colleagues remains virtually nonexistent.

You May Also Like  Who is the real Marty Becker?

The problem with this brand of mental illness isn’t just that most people don’t understand, it’s that even normally compassionate, empathetic people (like veterinarians) seem to not want to understand, as evidenced by the everyday cruelty visited on people looking for help online. (Because who would look for it in their workplace?)

Which brings me back to the reasons why I avoid mental health-themed social media. Not sure what I’m referring to? Here I’m thinking not just about people who hold clear biases against substance abusers (God knows there are enough of these we can all point to), but also the would-be helpful people who self-identify as supporters online and elsewhere. Yes, even among many of the empathetic, there’s room for more knowledge.

“My associate’s addiction started with a legitimate injury and his need for pain relief.”

This one is common. Echoed almost word for word by Prince and Tom Petty’s families, the implication is that addiction is a moral flaw, a weakness, and something to be thoroughly ashamed of. The need for pain relief after an injury, however, is justifiable and relatable.

“If only they could reach out for help.”

Really? What kind of a masochist would reach out for help when almost everyone in their culture is telling them their behavior defines them as a piece of crap? Or threatens to yank their license of they do “reach out?” Most addicts need help to get help.

Furthermore, addiction is a disease of self-denial, one where the brain itself is unaware it’s being held for ransom by the substance it’s wired to crave. To lament the failure of the sick to go to the doctor, priest, or colleague merely blames and “other-izes” the victim some more.

“I know my colleague is pilfering from the stash, but she does her job well. I’m not sure what to do.”

Yes you do. Your job—as someone who’s aware enough to see the problem, concerned enough to write about it, and empathetic enough to know it’ll be hard to deal with—is to confront it directly. Don’t leave it up to HR, who probably will do the inhumane thing and call the police (I’ve seen it happen, and it’s cruel and wrong).

You May Also Like  Healthy team members improve patient care

For some reason, addiction scares us. Which is why instead of offering kindness and compassion, we behave obliviously, dismissively, legalistically, or even belligerently. Most, however, like the colleague in this scenario, simply run away.

But intelligent and compassionate as you doubtless are, I know you can do better. Why not do what you’d do if you happened upon a tough clinical case? Read up on it first. Talk to the person human to human, privately (online I try to message people directly). And finally, whatever you do, talk them into seeking the help of a supportive, anonymous community. They save lives!

Sure, it’s easier said than done and I’d need at least eight more columns to do it justice, but there you have it. I can’t give you the wherewithal to handle the so-called, “impaired” clinician with dignity and compassion, but maybe—just maybe—you’ll have gained a better understanding of how to speak enough of the language you need to offer the message that’s required.

Dr. Patty Khuly owns a small animal practice in Miami and is a passionate blogger at drpattykhuly.com. Columnists’ opinions do not necessarily reflect those  of Veterinary Practice News.