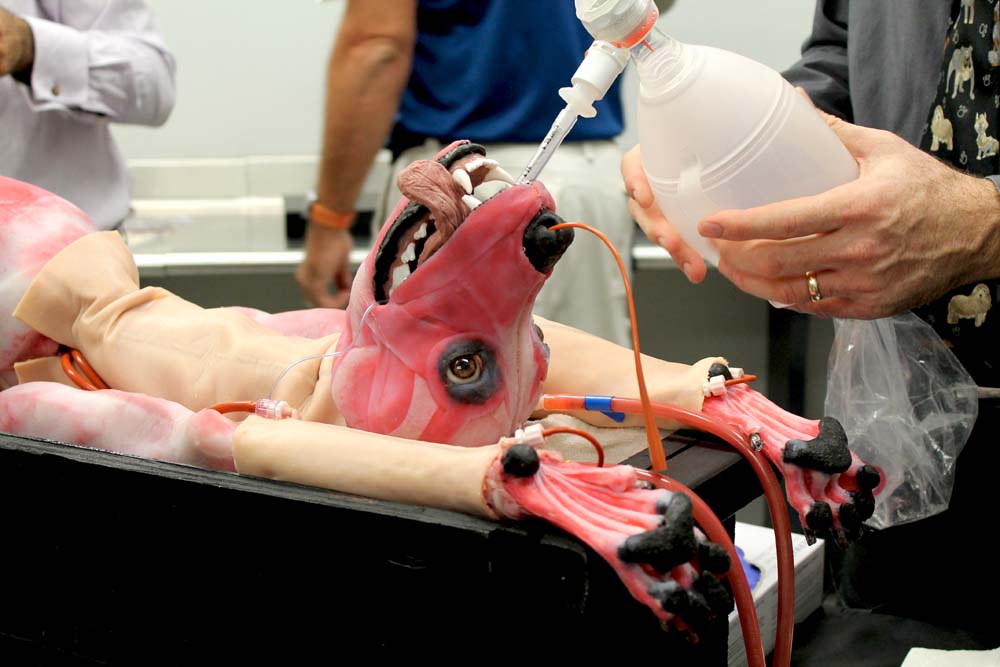 The SynDaver Synthetic Canine will provide veterinary students with an anatomically accurate platform to practice surgical procedures, according to the company. The canine model mimics functioning body systems, and has the capability to simulate customized diseases, illnesses and medical complications. The canine model is anatomically accurate, the company says, with fat, fascia planes, bones, muscles, ligaments, fully articulating joints and each of the bodily systems. It also has a heart with a heartbeat, a circulatory system and bleeds when surgical cuts are made.

The company has also launched a $24 million crowd-funding campaign to end terminal surgery labs, saying the synthetic canine will end the need for the labs in veterinary schools. SynDaver hopes to raise $24 million through their campaign page on Indiegogo.com; if their fundraising goal is reached, they plan to provide up to 20 synthetic canines to each accredited veterinary college around the world, without charge.

As they write on their fundraising page:

“In order to meet our goal of ending ‘terminal surgery labs’ worldwide and saving thousands of animals, we are launching one of the most ambitious crowdfunding campaigns in history.

We want to fully equip every accredited veterinary college in the world with enough SynDaver Synthetic Canines to meet the full scope of their educational needs.

It takes several hundred man-hours to build each of our SynDaver Synthetic Canines and we need your support to scale our operations, so we will be able build the 1000 required models in the shortest amount of time possible. The quicker we are able to supply each veterinary college with these canine models, the more animals we will be able to save from “terminal surgery labs.”

Many veterinary colleges around the globe still rely on terminal procedures to educate students, SynDaver said in their press release.

“If we launched this product organically, it might take us a decade to put canine cadavers into every veterinary college and many more animals would die needlessly as a result,” said Dr. Christopher Sakezles, chief technology officer and founder of SynDaver Labs. “With the help of the crowdfunding campaign, we can do this practically overnight, and start to put an end to terminal labs for good.”

According to the company, the canine model has been acclaimed by experts in the veterinary industry and has earned the support of Dr. Michael Blackwell, a member of the board of directors of the Humane Society Veterinary Medical Association.

“A significant number of students do not care to be involved in terminal surgery procedures or the use of live animals when there is an alternative,” Blackwell said. “I am so happy to have this change because that is where we need to be today.”

SynDaver has been working closely with the University of Florida College of Veterinary Medicine throughout the development of the SynDaver Synthetic Canine.

If their crowdfunding goal is met, the company plans to begin working on the SynDaver Synthetic Feline next. They also have plans to develop synthetic horses and cows.