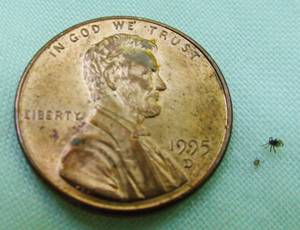 Ixodes scapularis nymph and larva next to a penny. Nymphs will become active very soon and are responsible for transmitting many of the tick-borne diseases in the summer.

For a number of reasons, tick populations in many areas of the country will likely explode this year, according to several parasitologists, so veterinarians should be vigilant about discussing preventives with clients.

“There has been an increase in tick populations over decades, but in the last 10 years, they have really exploded,” explained Susan E. Little, DVM, PhD, Dipl. ACVM, Regents professor and Krull-Ewing chair in veterinary parasitology at Oklahoma State University. “And it is not just more ticks, it is more ticks in more places.”

There are many reasons that ticks and the diseases they carry spread:

Winters in the United States have been milder than they were 20 or more years ago, when long periods of harsh weather used to kill off many ticks, explains Michael W. Dryden, DVM, Ph.D., university distinguished professor in veterinary parasitology at Kansas State University.

“Without the deep, hard, cold winters, we don't have the winter kill, and several ticks that were abundant in the South have moved North,” Dryden says. “It has to be really cold to kill a tick, at least 10 degrees F, and it has to stay that temperature for some time. All it takes is temperatures of around 40 degrees F for ticks to be active. If it just drops overnight and then warms back up, that doesn't help.”

Even areas that had a good deal of snow this year will not necessarily see a tick die-off, because the snow serves as a blanket.

“If they are under a snow blanket, it doesn't do much harm to them at all,” Dryden says.

Some ticks just aren't that bothered by cold weather, Little adds. “Ixodes scapularis, the black-legged tick, thrives in the winter months. The adult tick is out from October to February, although nymphs may not come out until May,” she says.

The serious drought that affected much of the country last year could put some negative pressures on some ticks.

“Last year was kind of a down year for Ohio ticks in general, although more blacklegged ticks were submitted to the Ohio Zoonotic Disease Program than ever,” says Glen Needham, Ph.D., associate professor of entomology at The Ohio State University. “We had an early spring and then a midsummer drought and that combination had a negative impact on ticks here. This seemed to extend the American dog tick [Dermacentor variabilis] season well into the late summer and early fall.”

But in other areas, ticks thrive in dry weather.

One of the biggest contributors to the changing epidemiology of tick populations is wildlife. Ticks hitch a ride to new areas on migratory birds, rodents, coyotes and other wildlife. But it is the white-tailed deer that has really helped them flourish.

It might be hard to imagine today, but there was a time when white-tailed deer in the U.S. were in danger of being over-hunted. Many states instituted conservation efforts, such as limiting when deer can be hunted. This conservation effort has been one of the most successful in history, and today an estimated 30 million deer roam this country.

“Ticks get moved around a lot, especially on migratory birds, deer and coyotes. Once they are dropped off into an area, they are moved within that area by smaller wildlife,” says Needham.

In addition, more and more people are encroaching on wildlife as they move from urban areas into rural and suburban areas, putting themselves and their pets in harm's (the tick's) way.

And there has been a move to decrease mass sprayings of insecticides and to preserve open space and plant more trees. Although these are great steps to preserve the environment, they have a downside—more ticks.

Ticks are the major cause of vector-borne diseases in the United States, but two ticks are particularly troublesome: I. scapularis and Amblyomma americanum (the Lone Star tick).

They have spread across nearly half of the country, and in many states they overlap. Together, they have been implicated in the transmission of nearly a dozen human and animal infectious diseases, including anaplasmosis, babesiosis, ehrlichiosis and Lyme disease.

D. variabilis is also a “bad actor” transmitting Cytauxzoon felis, a deadly feline infection, and Rocky Mountain spotted fever, which can be deadly for both people and dogs.

The Canaries
Because ticks are spreading to new areas, dogs especially can serve as the “canaries in the coal mine,” according to Needham. Veterinarians might see new ticks and diagnose emerging diseases in an area before medical doctors see them.

“Dogs are often the first indicator of a tick-borne disease in an area, because they are out in the habitat,” Needham says. “If they are not protected by anti-tick products, they will pick up ticks and get sick. Veterinarians must keep abreast of what diseases are prevalent in the area where they practice. That can be a challenge. Here in Ohio, we are seeing the emergence of the deer tick. Veterinarians are not used to seeing that tick here.”

Co-infection is another emerging problem, says Little. “Co-infections are becoming the rule in many areas.”

This makes both diagnosis and treatment more challenging because dogs might have two sets of signs.

“If the dog does not respond to the doxycycline [the antibiotic used to treat many tick-borne bacteria], I encourage veterinarians to continue looking because there can be other pathogens on board.”

The other area where veterinarians can be particularly useful is teaching clients about the diseases that are present in their area and recommending the best protection for that pet in that area. This is vital to limit the extent of these pathogens, the experts say.

“Owners do not take the risk seriously enough,” says Dryden.

“They take the risk seriously for themselves, but not their pets. Veterinarians or their technicians must spend time with the owner talking about the importance of tick-transmitted diseases in their area and what they can do to protect their pets from getting these diseases. They cannot just throw a tick product at the dog or cat and say ‘We're done.'”

There are data that suggest that pet owners apply spot-on tick prevention products an average of four months in a given 12-month period, Little says, so veterinarians need to remind people that they must be vigilant in applying the product.

Little and her group recently did an experiment in which they walked 10 healthy beagles in a tick-invested area every day for eight weeks.

Over the course of the study, each dog got an average of 100 ticks on it and every dog seroconverted to ehrlichia and rickettsia, she says, although the researchers did not allow them to become ill.

“That means the risk of a tick-borne infection is 100 percent,” she says.