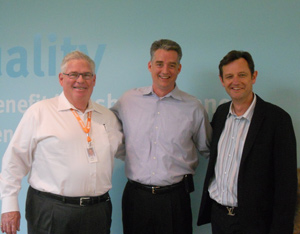 “This promotion is a testament to Tony’s sound and dedicated leadership at Banfield over the past two and a half years,” says John Payne, current president and CEO of Banfield Pet Hospital. “It also marks the smooth progression of the strategic business build and succession plans that Tony and I along with the leadership team have formulated and executed against for Banfield’s future success.”

Ueber says he looks forward to his new position at Banfield.

“I offer my heartfelt thanks for the mentorship and guidance that John has provided me throughout this journey,” Ueber says. “Together we have created a strong foundation for Banfield’s continued growth, success and commitment to providing pets with the highest quality veterinary care.”