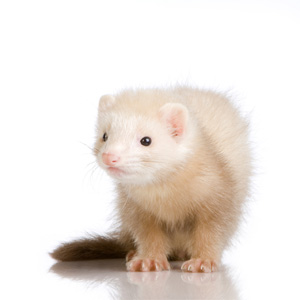 Mark Burgess, DVM, who practices in Beaverton, Oregon remembers a ferret that was brought into his clinic with both eyes hanging out of its head.

"The owners had closed the recliner and not realized that their ferret had its head stuck in there. This popped out both of the ferret's eyes, and the ferret became instantly blind," Dr. Burgess said. The ferret's eyes were swollen and damaged, so the best thing that could be done for it was to remove its eyes and close the area up. "The ferret's hair eventually grew back in and today it looks like it was just born without eyes," Burgess said. "It runs around like normal and does fine."

That particular case was rather unusual the way it happened, Burgess said. But eye traumas in general are fairly common occurrences in his practice.

"Ferrets are very inquisitive and can get hurt when they're snooping around. Or their eyes might become scratched when two ferrets are rough-housing with each other, or they could have a run-in with a cat," Burgess said. A veterinarian at an exotics practice is also likely to have to treat ferret injuries.

The majority of eye problems are a result of congenital or hereditary issues, infections, trauma or cancer. Sometimes the disease threatens the ferrets' life in addition to its vision. Here's a run-down of eye problems typically seen in ferrets:

Cataracts, one of the most common ferret eye diseases, can be congenital where the ferret is born with a cataract or develops it very young in life, or it can come on because of old age. Ferrets with diabetes, uveitis and Aleutian's disease may have an increased risk of developing cataracts.

More often than not, though, "cataracts just pop up and we don't know why," said Bruce Williams, DVM, Dipl. ACVP staff veterinary pathologist at the Armed Forces Institute of Pathology in Washington, D.C.

The prognosis for a ferret with cataracts is not usually good. In early stages of the disease, the animal will still be able to see light and shapes. In time, cataracts cause total blindness. "Sometimes anti-inflammatory drugs might be used to keep the eye calm and less inflamed, but it doesn't bring any vision back. It just helps the animal feel more comfortable," Burgess said.

On rare occasions, surgery may be done to remove the cataract, but this is not always practical.

"Cataracts surgery is relatively risky in ferrets," Burgess said. "They have very small eyes and doing a lens extraction on them is more difficult than it is on a dog or a cat. Most of the time ferret owners don't opt for it [because of] the risk involved and the cost, which can be quite high."

Another common eye disease in ferrets is glaucoma. It can be either primary glaucoma, which is caused by a deformed filtration angle; or secondary glaucoma, which is the result of an anterior luxation of the lens: the lens falls forward, blocks drainage from the eye, and pressure builds up. This shift in the lens may be brought on by severe trauma or cataracts. Glaucoma may affect one or both eyes, and can occur at any age. It is not known whether there is a genetic link. As in other species, glaucoma causes blindness, albeit not as quickly in ferrets, Burgess said.

"Ferret eyes are very flexible and they stretch out and get really big, which reduces the pressure and they don't lose the retina as quickly as other species do," he said.

However, it can be difficult to diagnose glaucoma in ferrets.

"We don't see the normal signs in ferrets that we do in dogs and cats," Dr. Williams said. "Ferrets often do not have any corneal edema. They also tend not to exhibit the pain that we see in dogs and cats, [which] will hold their eyes closed."

Williams said most cases of glaucoma in ferrets are diagnosed fairly late in the progression of the disease, typically when the globe becomes swollen and the eye no longer shuts properly.

"By the time the owner picks up on it and takes the ferret to the veterinarian, the pressures are often exceeding 70 or 80 millimeters of mercury and the animal is either blind at that time already or will surely be blind soon," Williams said. At that stage, most ferrets do not respond very well to therapy.

"The most common procedure we perform on ferrets with glaucoma is enucleation," Williams said. "For all practical purposes, the animal is blind anyway. The swollen glaucomatous eye is only a source of discomfort, so we'll remove the eye for pain control."

A third eye condition often seen in ferrets is retinal atrophy. It can occur at any age, but particularly in older ferrets. Ferrets with this condition start out with normal vision but gradually lose their sight. In advanced stages, the pupil will be completely dilated, fixed and will no longer respond to light.

You May Also Like  Veterinarians lead council for animal protection

"In order to diagnose it, you have to be willing to do a very thorough physical exam on the eye—which requires dilating the pupil. And a lot of vets don't take the time to do this," he said.

A lot of pet owners may not even realize their ferret has lost its sight.

"Because ferrets have dark eyes, most owners will not notice that the pupils are dilated," Dr. Gandolfi said. "The ferret's behavior at home may not have changed much; it's probably still running around at normal speed. The ferret may run into things occasionally, but most do that even when they can see."

According to Gandolfi, no one knows what causes retinal atrophy. Some speculate that it's an inherited condition; others believe is may be related to a deficiency of the amino acid, taurine. As with other degenerative conditions, there is no cure.

Ferrets of all ages are susceptible to uveitis. This condition is most often a result of trauma in the eye—especially a penetrating wound that becomes infected—or infection with the Aleutian's disease virus. Uveitis can lead to cataracts and glaucoma.

Uveitis is usually treated with anti-inflammatory medications such as cortisone (usually in the form of eye drops) to try to reduce the inflammatory process.

"If the root cause is Aleutian's virus, it's hard to stop that, but you need to at least try to suppress the inflammation because that's what harms the eye," Burgess said. "Left uncontrolled, not only will the eye be painful, it can also damage the retina and lead to blindness."

A common type of cancer in ferrets, which affects the orbit (rather than the eye itself), is retrobulbar lymphoma. In this disease, the tumor grows behind the eyeballs and pushes them out of their sockets.

"It resembles glaucoma initially because the eyes look bigger and bulgier, but it's not the eyeball that's getting bigger. It's something behind it that's pushing it out," Burgess said.

According to Burgess, the only way to confirm the diagnosis is to do ultrasound on the area behind the eyes to see if there is a lump there, do a needle biopsy to see if it is cancerous, and measure the pressure inside the eyeballs to see if there's an increase in pressure.

"If the pressure is elevated, you know that's probably glaucoma and usually the eye looks cloudy too," Burgess said. "But in lymphoma the pressure isn't necessarily going to go up in the eyeball, but there will be more pressure behind the eye."

Retrobulbar lymphoma and glaucoma are easily confused, according to Burgess.

"It's important to tell them apart because the one's treated entirely differently than the other," he said. "Lymphoma is a life-threatening disease. Glaucoma will threaten the sight but it's not anymore dangerous than that."

The treatment for retrobulbar lymphoma is removal of the tumor and damaged tissues, and perhaps chemotherapy. In severe cases where the eyes have bulged to the point that they can no longer spring back into the sockets, enucleation may be necessary, said Weare, N.H., veterinarian, Michael Dutto, DVM.

"Unfortunately in many cases, the lymphosarcoma is present in other parts of the body," Dutton said. "Hence it carries a poor prognosis."

Eye trauma is a common problem in ferrets. Most often that means scratches and puncture wounds. These can lead to corneal ulcers, which may become infected and need treatment with antibiotics.

"A corneal ulcer, if it's not full thickness, can be healed," Williams said. "But if the lens has been punctured, the proteins in the lens when released into the rest of the eye cause tremendous inflammation and those animals go blind."

Once the ferret has lost its sight, not a lot can be done for it. This holds true whether the blindness is caused by trauma or disease.

"We simply have not gotten very far with treating eye diseases in ferrets, and very little research has been done in this area," Williams said.

The good news, though, is that most blind ferrets manage very well.

"This is not a species that is horribly impacted by blindness," Burgess said. "Ferrets don't have good eyesight to start with. They rely on their sense of smell and hearing, and whiskers to get around. They use their vision when they have it, but they don't rely on it the way humans or cats do. When ferrets go blind, it usually doesn't slow them down at all. They still run around the house and play—and, in most cases, don't act any different than they did when they had their sight."

One thought on “Trauma And Disease Threaten Ferret Eyes And Lives”