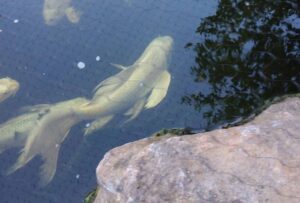 According to UC Davis, the koi’s behavior and eating patterns were normal and veterinarians initially thought the distension was likely caused by egg-binding in her body cavity.

To make her spawn within a few days, Madonna was injected with a spawning agent medication. Her owners monitored her for any signs of diminishing health, like a change in appetite, swimming behavior, or buoyancy changes.

After no spawning, Madonna underwent imaging procedures with Kathryn Phillips, DVM, DACVR, and Kelsey Brust, DVM, of the hospital’s diagnostic imaging service. A large mass filling the majority of her abdomen—the origin of which was unknown—was found during the ultrasound.

Madonna was also given a CT scan, which showed an extensive mass, with inability to view any normal liver, GI tract, or gonads. The fluid-filled mass extended forward, pushing her heart.

Due to the size of the mass and lack of normal structures within the abdomen, aquatic specialist Esteban Soto, DVM, MSc, PhD, Dipl. ACVM, informed Madonna’s owners that surgical removal of the tumor could be attempted, but would carry a high risk of complications. Ultimately, Dr. Soto, along with other exotic veterinarians, performed the 90-minute surgery.

The balance to keep Madonna from being too deep or too light under anesthesia was monitored closely throughout the procedure. Veterinarians kept a close eye on her opercular rate and used Doppler to monitor the flow of blood through her heart.

Madonna remained stable under anesthesia for the entire surgery, and the veterinarians were able to safely remove the 2.4-lb. gonadal tumor.

A large incision on Madonna’s underside was sutured, and she was transported to the UC Davis Center for Aquatic Biology and Aquaculture (CABA).

You May Also Like  Choosing CE wisely to grow your career

Madonna started eating and swimming soon after the operation and had her sutures removed three weeks after surgery. She was monitored for another week at CABA before she returned to her home pond.