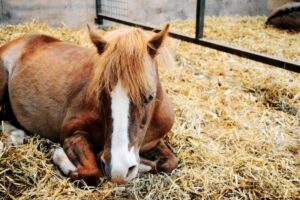 Peritonitis (inflammation of the peritoneum) is a medical condition occasionally seen in horses. It is most commonly caused by a bacterial infection following events such as rupture of an abdominal organ, trauma to the peritoneal cavity with secondary infection, or abdominal surgery as a secondary complication. Treatment usually involves long courses of broad-spectrum antibiotics or antibacterial agents, and the outcomes are often unrewarding.

Perhaps less well-known is that peritonitis can be seen in horses where there is no obvious underlying cause (idiopathic peritonitis). A recent retrospective study from Sweden documented 130 cases of idiopathic peritonitis and described its clinical signs, laboratory findings, results of bacterial culture, treatment protocols, and survival rates.

The final study group consisted of 130 horses. Of these, 54 percent were geldings, 37 percent were mares, and nine percent were stallions. The age of the studied horses ranged from six months to 30 years, with a mean and median of 11 and 10 years, respectively. A variety of breeds were represented, including warmbloods, Icelandic horses, and ponies.

The primary presenting clinical signs were lethargy, fever, anorexia, and abdominal pain (colic). Clinical signs were usually acute, and there was no previous history of illness. Horses were typically referred for evaluation and treatment within a day of the onset of clinical signs. Almost half the horses in the study had large colon impactions (diagnosed by rectal examination). While it has been suggested large colon impactions are secondary complications to dehydration and fever that may occur with the condition, it also is possible impactions compromise the intestinal mucosa and cause secondary leakage. As such, the combination of fever and large intestinal impaction should spur the attending clinician to look deeper, as most uncomplicated cases of colic do not also have pyrexia.

Peripheral blood tests were often normal in affected horses, including complete blood counts and plasma fibrinogen; however, serum amyloid A (SAA) was often markedly elevated. The most reliable diagnostic tool for idiopathic peritonitis was abdominocentesis. Thus, in horses presenting with the vague signs described previously, abdominocentesis should be considered as a potentially valuable diagnostic tool.

Analysis of abdominal fluid is normally diagnostic in cases of idiopathic peritonitis. The peritoneal fluid of affected horses is usually turbid, although there may not be a change in color. Nucleated cell counts are typically elevated (> 10 × 109 cells/L), as is total protein (> 25 g/L).

All horses identified with idiopathic peritonitis received antimicrobial therapy. Many of the treated horses received a combination of penicillin and gentamycin. The survival of affected horses until discharge was 94 percent.

Interestingly, in the middle of the study, attending veterinarians adopted a new treatment protocol. Instead of combination therapy, horses were treated with penicillin alone. Based on the apparent insensitivity of the fibrinogen assay, SSA levels were monitored to see when treatment could be discontinued. This protocol reduced the use of broad-spectrum antimicrobial agents. It also reduced the length of time horses stayed in the hospital, since they could be discharged when SAA levels fell and treated at home with penicillin by their owners.

Caveats are in order, however. The use of the SAA test was not standardized among clinicians. Some followed horses with SAA alone, while others obtained confirming peritoneal samples. Since SAA was not monitored according to a standardized protocol, the study was unable to provide treatment recommendations based on specific SAA levels. Further, as horses were discharged before treatment was stopped, the total number of treatment days was not determined for all those in the study.

The survival rate of affected horses was excellent. Ninety-seven percent of horses diagnosed with idiopathic peritonitis survived for more than one year after discharge, which is higher than survival rates reported in studies where idiopathic cases were evaluated concomitant with cases of known origin of the condition. (In such studies, survival rates of 58 to 84 percent have been reported previously.)

The recurrence rate also was very low. Only one horse reported a second case of idiopathic peritonitis after discharge. Recurrent colic was seen in 17 percent of the cases discharged; however, this rate is lower than has been reported for recurrence rates in horses treated medically for other types of colic.