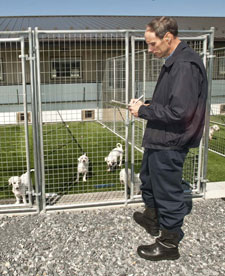 The U.S. Department of Agriculture has narrowed the definition of a retail pet store in a move that brings more Internet animal sellers under federal oversight.

The government on Tuesday issued a final rule that is expected to affect up to 4,640 dog breeders, 325 cat breeders and 75 rabbit breeders nationwide.

The USDA’s Animal and Plant Health Inspection Service (APHIS) proposed the rule in May 2012 in an effort to address what the agency calls "sight unseen” transactions in which a buyer never sees the animal or its living conditions before purchase. The rule forces many of those breeders to comply with Animal Welfare Act guidelines.

"We know that if the federal standards are being met, the animals are getting humane care and treatment,” said Ed Avalos, undersecretary for marketing and regulatory programs. "By revising the definition of retail pet store to better suit today’s marketplace, we will now improve the welfare of more pet animals sold sight unseen.”

The rule exempts a number of operations and people, including traditional pet stores, sellers of working dogs, most animal rescues and shelters, breeders of rabbits for food or fur, and dealers in fish, reptiles and other cold-blooded animals.

"This will allow APHIS to better concentrate its resources on ensuring the welfare of animals at larger breeding operations,” the agency reported.

"Internet-based businesses and other businesses that sell animals sight unseen must now be licensed and inspected by APHIS to ensure the pets they sell to the public receive minimum standards of care,” APHIS reported.

"[It] will do more damage than good,” AKC spokesperson Lisa Peterson said. "The federal government has missed an opportunity to introduce a smarter, more effective rule to deter unscrupulous breeders and sellers by imposing a regulation based on the number of dogs sold, not the number of dogs a person owns.”

The American Society for the Prevention of Cruelty to Animals supports the change.

"This rule represents a meaningful effort by the USDA to target problematic, large-scale breeding operations and will require them to meet minimum care standards for breeding dogs and the puppies they produce,” said Nancy Perry, senior vice president of government relations.  "The ASPCA has witnessed the abhorrent cruelty that often exists behind the pictures of happy puppies posted on a breeder’s website, and this rule will crack down on the worst Internet breeders.”

The cost of complying with the new rule will be negligible, APHIS stated. A business housing six breeding females and 74 dogs can expect to pay from $284 to $550 a year for licensing, identification tags and recordkeeping—or less than the typical price of many purebred dogs.

The rule is expected to go into effect in November after being published in the Federal Register.

The Animal and Plant Health Inspection Service published a fact sheet to accompany news of the rule change regarding retail pet stores. Some excerpts:

Q. Why is APHIS changing the definition of a retail pet store?

A. Over the years, APHIS has received increasing complaints from the public about the lack of monitoring and oversight of the health and humane treatment of dogs and other pets sold sight unseen—often over the Internet. Our primary goal is to ensure that certain people who sell pets at retail sight unseen are regulated under the Animal Welfare Act (AWA) so that these animals can be monitored by our agency for their health and humane treatment.

Q. What is the new definition of a retail pet store?

A. In the final rule, "retail pet store” means a place of business or residence at which the seller, buyer and the animal available for sale are physically present so that every buyer may personally observe the animal prior to purchasing and/or taking custody of it after purchase. By personally observing the animal, the buyer is exercising public oversight over the animal and in this way is helping to ensure its health and humane treatment. Retailers who sell their pet animals to customers in face-to-face transactions do not have to obtain an AWA license because their animals are subject to such public oversight.

A. These "brick and mortar” stores will continue to be exempt from federal licensing and inspection under the AWA just as they have been. However, traditional retail pet stores that also sell animals sight unseen must be licensed and inspected.

Q. Do sellers who breed pets at their residences have to allow buyers into their homes in order to be considered a retail pet store?

A. No. The regulation allows for sales to take place at any location agreed upon by the seller and the buyer. This could be a home but it could also be another mutually agreeable location.

Q. What does the final rule mean for state, county or city owned and operated pounds and shelters, as well as humane societies and other organizations that operate under a contract with those jurisdictions?

A. The final rule has no effect on these entities. These agencies and organizations are not regulated under the AWA as long as all of their activities are under the jurisdiction of the municipality, township, city, county or state and do not fall under APHIS regulation.

Q: How will the agency identify breeders who may need to be regulated?

A: APHIS will access publicly available information to identify and inform those individuals who may need an AWA commercial breeding license. These methods include evaluating customer complaints against breeders and Internet retailers, as well as reviewing the marketing and promotional materials of breeders and Internet retailers. By viewing publicly available information, APHIS can educate individuals about the AWA, and if needed, assist them with obtaining licenses.