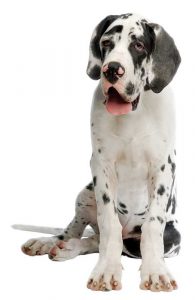 Gastric dilatation volvulus (GDV) is a complex, scary, life-threatening emergency. We sometimes tell pet owners that we don’t really know what causes GDV, but that is not exactly accurate.

Countless studies have been published over the years to try to understand the risk factors, while some articles have definitely shown several known culprits. As such, it is possible to educate pet owners to help reduce the risk of GDV. Here is a recap of its main causes.

Large and giant dog breeds are at risk for GDV, including Great Danes (the number one breed), German shepherds, Weimaraners, St. Bernards, and Old English sheepdogs. These breeds are roughly 25 percent more likely to develop GDV than others. A few smaller breeds, such as basset hounds, boxers, and standard poodles are also prone to GDV. So there is at least a partial genetic component to this condition.

Ultimately, the disease is related to a dog’s conformation, more than weight or size. Breeds that are “deep-chested” (i.e. have a greater thoracic depth/width ratio) are more likely to develop GDV. Eating or drinking places tension on the hepatogastric ligaments. A deep chest, combined with stretching of the ligaments, increases the chance of gastric torsion. The hepatogastric ligaments of dogs with GDV are known to be longer than size- and weight-matched, non-GDV control patients.

Dogs with a first-degree relative who had GDV are at greater risk of developing
it themselves. This chance increases by 20 percent with each additional year. These factors, again, support the fact that GDV is a partially genetic disease. Therefore, better selection should be taken into consideration by breeders. Should you have the luxury of having a pre-adoption discussion with a client, mention the breeds at risk.

Stressful situations can also contribute to GDV. Boarding, thunderstorms, moving, unknown visitors, vet visits, and hospitalization are all potential triggers for nervous dogs. One study showed that having a high-stress environment or being fearful contributed to acute GDV compared to control dogs who were in a non-stressful environment.

Something as simple as how often dogs are fed, or how fast they eat, can have drastic effects on their chances of developing GDV. The risk of GDV in large-breed dogs increases by 38 percent with each unit increase in the speed of eating (scored on a scale of 1 to 10). Dog owners should be given tips and tricks to slow down their dog’s eating.

In addition, dogs fed once daily have a surge in intragastric volume, which can increase their risk for GDV, compared to dogs who are fed three times daily. It is therefore recommended to offer several small meals throughout the day to lessen the risk of GDV in at-risk dogs.

Studies have shown that moistening dry dog food prior to feeding increases the risk of GDV in large-breed dogs. Ironically, feeding a dry-only diet has also been shown to increase risk. Recommendations have been made to help prevent a first episode by avoiding exclusively dry, expanded, cereal-based, or soy protein-based commercial dog foods. Feeding a combination of dry and canned food together may be a way to lower the chances of GDV. Also, foods with fat listed among the main four ingredients have been shown to increase the occurrence of GDV.

Another common recommendation to reduce the risk of GDV is to avoid heavy exercise one hour before and two hours after eating a meal.

Although age is not a disease, it can play a role in a dog’s risk for GDV. As discussed above, when dogs age, natural changes in the abdomen can increase the likelihood of GDV. In Great Danes specifically, age was the most important risk factor for GDV.

It is recommended to avoid large amounts of water consumption before and after exercise.

Ironically, too little water before and during meals may increase the chance of a dog suffering from GDV! A recurring “hot story” about ice water causing GDV regularly shows up online and appears to be completely made up, if not a hoax.

Recurrence of GDV in spite of a gastropexy is under five percent versus over 85 percent without this procedure. Studies and experience show prophylactic gastropexy is effective at preventing gastric torsion, but (theoretically) not gastric dilatation.

In dogs at risk, a prophylactic gastropexy should be recommended. For example, Great Danes have a 40 percent chance of having GDV in their lifetime. Ideally, this life-saving surgery should be performed at the time of the dog’s spay or neuter—or as soon as possible thereafter. That said, it’s never too late to prophylactically pexy a dog… until they have an episode of GDV.

These risk factors may alter gastric motility and reduce gastric emptying, ultimately starting the insanely complex cascade of events that leads to GDV. There are countless other risk factors that are unproven, controversial, or contradicting. In other words, some studies show a raised bowl is better to decrease aerophagia, while others indicate a bowl on the floor is ideal. The at-risk gender varies from study to study. The month, the cycle of the moon, and a previous splenectomy are also fuzzy risk factors.

Rather than avoiding a conversation with a client by telling them we don’t really know what causes GDV, veterinarians and nurses have a critical role in educating owners of dogs at risk for GDV. The sidebar to the left provides some talking points to better help your clients. Given the cost of treating GDV, this is also a great time to remind clients of the life-saving benefits of pet insurance.