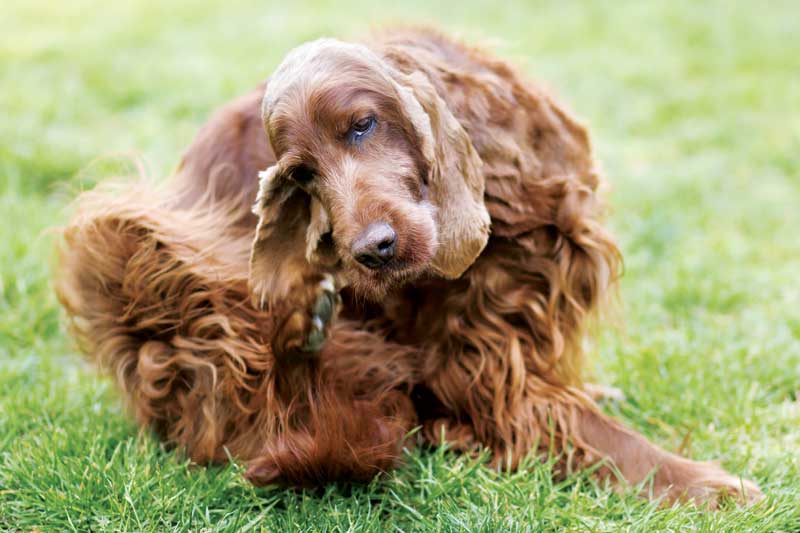 Canine otitis externa (OE) is one of the most common diseases practitioners encounter. It is defined as inflammation of the ear canal, and involves the pinna and vertical and horizontal canal up to the tympanic membrane (ear drum). This is not to say otitis is not a problem of the middle ear; however, this topic will not be discussed in this article.

OE can be either acute or chronic; it can also be the case that an acute case becomes a chronic condition. Otitis externa presents clinically as head-shaking, ear-scratching, or crying in pain when the ears are palpated. OE can also be odorous (e.g. a musty smell) unilaterally or bilaterally. The primary cause of otitis may either occur seasonally (e.g. seasonal allergies to grass pollen; grass seeds are seen more in the summer) or year-round; however, practitioners should not disregard that if immunity is lowered due to various reasons, the skin may display clinical signs of “flare ups.”

A worthwhile course of action is to treat the immediate signs found on physical exam and then address the long-term situation, whether this is to determine the disease’s cause or to ensure continuous maintenance of a clean ear canal or both.

Getting to the root of the problem

When a patient presents with OE, the goal of a small animal practitioner is to:

1) Determine the cause (e.g. atopy, foreign body, immune-mediated diseases, hormonal imbalances, tumors) by examining the ear canal. This can be difficult if the cause is not overtly present, such as with allergic dermatitis.

2) Treat the findings as confirmed by cytology, as well as the associated inflammation, which is usually the reason the client brought their pet to your clinic.

4) Prevent recurrence, if applicable (e.g. cases of atopy as opposed to foreign bodies such as grass seeds).

The following are some of the challenges practitioners face regarding OE:

Frankie goes to the veterinarian

The following case highlights the importance of cytology and the use of diagnostic tests, such as culture and sensitivity.

Frankie is a three-year-old neutered female, mixed-breed dog weighing just under 50 kg. She is an outdoor dog with four others in the household. Frankie is cared for by two family members: an elderly aunt who is the dog’s owner and a niece who takes Frankie to her veterinary appointments and likely partakes more in medicating and caring for her. The dog is not on any medication to control pruritus and her coat is in good condition. She gets her annual vaccinations and appears to receive monthly flea, tick, and heartworm preventatives. Frankie presented in 2017 with dirty ears, but no disease was observed at that time. That said, her ears are cleaned on and off with chlorhexidine ear wash.

You May Also Like  ‘Princess’ endures as most popular pet name

In July 2019, Frankie displayed overt clinical signs of discharge. Her owner had been cleaning the dog’s ears regularly, but frequency had decreased somewhat and clinical signs were present.

Frankie then visited the clinic where on physical examination, we observed her integument had no lesions to suggest pruritus (alopecia, crusts, erythema). Her ears alone were seen to be affected. What was noted was an odorous discharge from both canals with stenosis, the left canal being more affected than the right. Frankie was not on medication for pruritus.

Samples were taken for cytology, culture, and sensitivity:

Frankie’s ears were treated topically with drops containing an antibacterial, antifungal, and steroid, as well as oral NSAIDS of carprofen at a dose of 2.0 mg/kg twice a day and amoxicillin/clavulanic acid at 10 mg/kg twice a day. This treatment is licensed for one week. At her three-week follow-up appointment and based only on physical exam, Frankie’s ears had improved. Her owner was instructed to return to frequent cleaning using a chlorhexidine otic solution.

Fast-forward to May 2020 where this time, Frankie’s groomer noticed she had painful ears upon cleaning and an odor was present.

On physical exam, all her vitals were within normal range. She was alert and responsive, though with a stoic personality, it was difficult to assess her pain threshold. Once again, only Frankie’s ears displayed changes on clinical exam (and not the rest of her skin). Her canals were severely inflamed and painful, making otoscopic examination difficult especially of her horizontal canals. I was only able to examine her vertical ear canals with a medium-sized cannula of the otoscope. In addition, significant odor and purulent discharge were present. Ulcerative lesions were noted at the vertical-horizontal junction of her ear canals, with the left being more severe than the right.

As Frankie had a history of Pseudomonas aeruginosa and she had not been seen for at least one year, my recommendation was to swab both canals for culture and sensitivity. I discussed with her owner the cost of submitting a swab and why this was necessary. Once the client was aware of the seriousness of Pseudomonas, which is an opportunistic microorganism, she was supportive of this diagnostic test.

Frankie was placed on a compounded solution of saline and enrofloxacin, as well as an oral dose of steroids: prednisone at 1 mg/kg as a divided dose for five days to then reduce to every other day for five days. Thus, her total initial time on steroids was two weeks. I was suspicious her ears were more severely affected than at the last exam and chose to use an off-label topical solution (a compounded mixture of injectable enrofloxacin and saline) that costs half of what I prescribed previously, as it would take longer to resolve Frankie’s infection. I also placed her on cefpodoxime at 10 mg/kg, and planned to contact her owner as soon as possible with the initial cytological isolation, followed by the culture and sensitivity.

Why this choice of medication for Frankie? There were many factors at play here:

1) Topical auricular drops were used immediately, as we suspected an infection. Cytology would usually have been carried out prior to placing Frankie on antibiotics just to confirm this was a bacterial infection. However, going by her history and the need for the owner to start treatment as soon as possible, this was a safe and economical option.

4) No cleaner was given. At this point, my concern was Frankie’s pain and to ensure as much owner compliance as possible. Based on her history, I felt too much at once could lead to confusion and a quicker decline in compliance.

5) No antifungal was prescribed. Again my concern was to at least await the isolate results prior to changing medication, if needed.

The following are the bacterial isolates noted by our lab:

I informed the owner of the isolates, which overall was good news, considering Frankie’s history of Pseudomonas.

COVID impacted the number of technicians working at the lab we use, which meant sensitivity results were unavailable until after Frankie’s recheck appointment about two weeks later. At this time, her ear canals were no longer painful on otoscopic exam and I was able to conduct more of an exam into her horizontal canals. Although they were still narrowed, they were less inflamed. In-house cytology was performed and no rods were present on methanol fixative, eosinophilic stain I, and basophilic, stain II. However, many cocci (4+) hpf 100xmag. were still seen. We noted no Malasezzia or inflammatory cells.

Frankie was kept on prednisone, though at a lowered dose of 0.5 mg/kg every other day over the course of two weeks. She needed to continue topical treatment that included an additional ingredient of dexamethasone two percent to the compounded solution of saline and enrofloxacin, again for two weeks. By this time, I had now introduced to the client the use of a cleaning solution containing triz-EDTA and ketoconazole. A follow-up appointment was set for two weeks later to monitor Frankie’s progress and hopefully see the infection resolved. One of my colleagues carried out the recheck, which included another in-house cytology. This time, there were few cocci. The owners had complied and Frankie was placed back on her original cleaner to use as needed. She has not presented to the clinic since then.

You May Also Like  Blood test streamlines canine cancer detection

What does this teach us?

Without owner education and complete compliance, chronic otitis externa can be complicated to resolve. As practitioners, we are limited to time constraints of a 20-minute appointment (or less) during which to explain our findings, underlying cause, and even the use of medications, the latter being one of the most important if we want our clients to comply. Chronic OE usually requires many recheck appointments, provided the client is willing. Although Frankie’s owner was initially keen to have her seen two more times for recheck, there have been no further visits to the clinic since then.

Within the limited time for consulting, in-house cytology should be carried out for OE patients.

In Frankie’s case, it was helpful for staging progress, at least in terms of determining types and numbers of organisms and cells. For most clients, this is an affordable diagnostic and a great way of communicating positivity regarding their client’s hard work in helping to resolve the infection.

The added benefit of culture and sensitivity should also be encouraged among owners as much as possible, as it does affect your prognosis, treatments, and other potential diagnostic tests or procedures you may need to recommend. With Frankie, the important conclusion was that Pseudomonas—which I consider the worst of the opportunist bacteria—were not present.

Renata de Rosayro, BVetMed, MRCVS, graduated in 1996 from the U.K.’s Royal Veterinary College. Since then, she has focused on small animal practice and worked throughout the U.K. and United Arab Emirates. Dr. de Rosayro has practiced in multiple roles prior to becoming a primary educator: from head of clinic, locum, official veterinarian for DEFRA (U.K. government’s Department for Environment, Food and Rural and Affairs) and as a sole business owner, starting her own veterinary business as a mobile veterinarian. She has a passion for the community care of animals and has worked pro bono for charities controlling stray animal populations (cats and dogs). De Rosayro enjoys contributing to Ross University School of Veterinary Medicine’s outreach programs within the beautiful island of Saint Kitts.