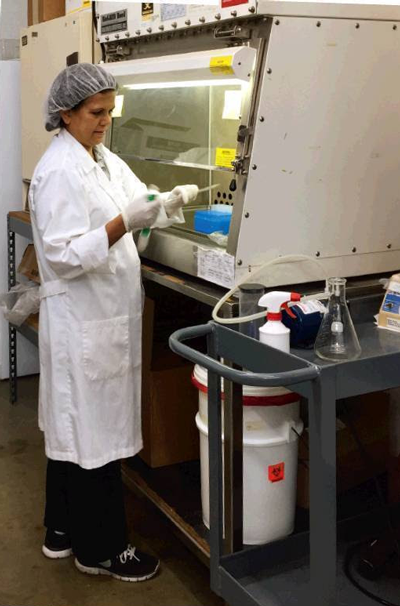 The words “Made in the USA” stamped across a product’s package or label are a source of pride for many U.S.-based manufacturers. But why do some veterinary companies choose to make their products in the United States?

While manufacturing internationally is often cheaper, cost is only one factor companies consider when deciding where to produce goods.

Some companies make their products where they are headquartered. The reason is simple: convenience.

LiteCure has been building therapy, or low level, lasers in Newark, Del., since 2005.

“The whiz kids who started the company—you know, the brain trust, the Ph.D.’s and technical folks—were here, and it grew organically,” said Carl H. Bennett, director of veterinary marketing for LiteCure.

Now that the company is firmly established in the United States, there is no real impetus to go offshore.

“In a field like ours in which we build things literally by the hundreds, the economies of scale are not like those manufacturing in the tens of thousands,” Bennett said. “For example, it’s not like we would be looking for somebody we could pay, say, $20 per hour instead of $40.

“Even if we thought there was cheaper labor somewhere, the cost to move would probably be greater than the savings, at least in the near term.”

With high-tech products like therapy lasers, having research and development and technical and scientific teams in the same country as many buyers has other bonuses.

“It’s often easier to convey design ideas, functionality and aesthetics in person, especially if there is not a language barrier and each person can have a hands-on discussion,” Bennett said. “That’s harder to do remotely.

“Another nice thing, too, is that the same teams who build the devices are a ready resource for the service group should a question arise.”

On the other side of the country, LightScalpel-Aesculight LLC has designed, tested, manufactured and serviced its surgical soft-tissue CO2 lasers at its Woodinville, Wash., factory since the early 1990s.

“Lasers, laser technology and laser surgery were all invented in the United States,” said Peter Vitruk, Ph.D., the founder and CEO.

“The highest-skilled and trained CO2 surgical laser scientists, engineers and technicians reside in the northwestern United States. It’s a great place to live and raise families.”

Manufacturing at the headquarters in close proximity to customers makes training, technical support and upgrades easier.

“The U.S. remains the greatest market by far for surgical lasers,” Vitruk said. “All other markets for us are icing on the cake, but the USA is a must.”

Keeping a close eye on materials and the manufacturing process is easier to do when products are made close to home. And for some companies, the higher cost of doing business domestically is justified with a higher-quality product.

Anacapa Technologies has been developing and manufacturing wound care treatment, infection and odor-control products in San Dimas, Calif., since 2001.

“We chose to manufacture in the U.S. primarily to employ and utilize both the highly trained scientists and the work force,” said Wally Rogozinski, president, CEO and inventor of the company’s core products, Biovetrex, Sani-Zone and Silver-Sept.

Foreign competitors may produce substandard products at low cost, he said, but for Anacapa, local manufacturing means “adherence to the highest standards in the industry, thereby assuring the highest quality.”

“We can justify a higher product cost with higher-quality products,” he said. “Customers also have a preference for American-made products and are often willing to pay more for that. [There is] also some patriotism here.”

The Cost of Doing Business

Mark L. Anderson, DVM, is a veterinarian with an entrepreneurial spirit. When he started his first practice in Spring Valley, Wis., in 1976, he encountered some unique needs, so he began producing specialty veterinary products. As his business grew, manufacturing companies formed in the United States, United Kingdom, Australia and New Zealand.

“Somehow, in any clinic you walk into, we’re in there,” Dr. Anderson said. “Our products are being used every day.”

One key to his company’s success, he said, is controlling all stages of the manufacturing process.

“The value in producing at our own facilities relates to quality and control of the resulting products,” he said. “We make functional products to standards, which meet the needs of veterinarians and consumers.”

Although MAI Animal Health manufactures some products internationally, many are made in the United States.

“The majority of products offered to the profession today are made within our facilities in the U.S., relative to injection molding, blow molding, tubing and film machining, and modeling,” Anderson said. “Quality is our primary goal at a low-cost value while sustaining our business and value by employing domestic staff.”

It’s no secret that products can be made cheaper in certain countries, but cheaper is not always the better option. Buying small amounts of materials or products won’t necessarily deliver cost savings.

“It’s all related to volume,” Anderson said. “If you’re a small player buying something out of China, it’s probably going to cost you as much or more than if you bought local.

“When you’re looking at quality, we’re making things according to government standards,” he added. “We have DMFs [device and drug master files] in order to manufacture this stuff according to FDA standards, which China doesn’t. They don’t need to. We’re building to standards that are the high end.”

At the end of the day, the old adage stands true: “You get what you pay for,” Anderson said.

“You might pay a little bit more for our product, but we’ll stand behind it,” he said. “I prefer having control of what I sell because I’m responsible for the quality that’s going out the door. If it doesn’t stand up to our standards, I don’t want to do it.”

Originally published in the July 2016 issue of Veterinary Practice News. Did you enjoy this article? Then subscribe today!