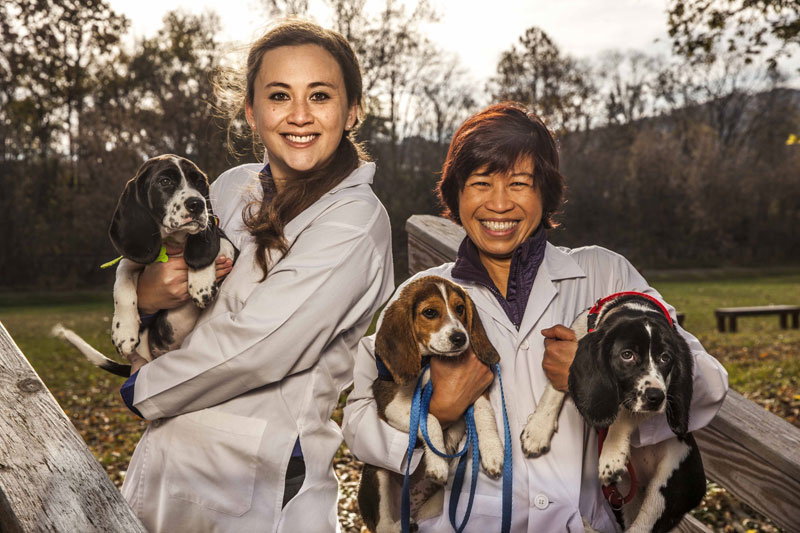 Researchers Jennifer Nagashima, left, and Nucharin Songsasen with three of the seven puppies born through in vitro fertilization.

Nearly 40 years after the birth of the first human “test tube” baby, a team of scientists has produced the first litter of puppies conceived by in vitro fertilization (IVF).

The Cornell University College of Veterinary Medicine reported that the achievement could lead to the preservation of endangered dog species and the elimination of certain canine diseases.

The researchers had to overcome peculiar challenges in order to successfully transfer to a host female 19 thawed embryos, seven of which developed into puppies that were delivered by Caesarian section in July. The findings were published Dec. 9 in the online journal PLOS One.

“Since the mid-1970s, people have been trying to do [IVF] in a dog and have been unsuccessful,” said co-author Alex Travis, VMD, Ph.D., an associate professor of reproductive biology at Cornell’s Baker Institute for Animal Health.

IVF is different from cloning, which has been achieved in dogs, in that IVF creates a new genome through fertilization while the latter procedure involves the transfer of DNA into a donor egg.

Researchers from Cornell and the Smithsonian Conservation Biology Institute decided on a few crucial steps:

The time from embryo transfer to birth was 65 days.

“We can freeze and bank sperm, and use it for artificial insemination,” Dr. Travis said. “We can also freeze oocytes, but in the absence of in vitro fertilization, we couldn’t use them. Now we can use this technique to conserve the genetics of endangered species.”

The appearance of the seven puppies in Ithaca, N.Y., came 37 years after Louise Brown was born in Manchester, England, following successful IVF.

People and dogs someday may benefit from studies like that involving the Cornell dogs.

Embryonic dogs offer a “powerful tool for understanding the genetic basis of diseases” in canines and humans, Travis said.

“A successful IVF process for canines may one day enable researchers to remove genetic diseases and traits in an embryo, ridding dogs of heritable diseases such as lymphoma, a cancer that is more prevalent in breeds like golden retrievers,” Cornell stated.

Added Travis: “With a combination of gene-editing techniques and IVF, we can potentially prevent genetic disease before it starts,” Travis said.