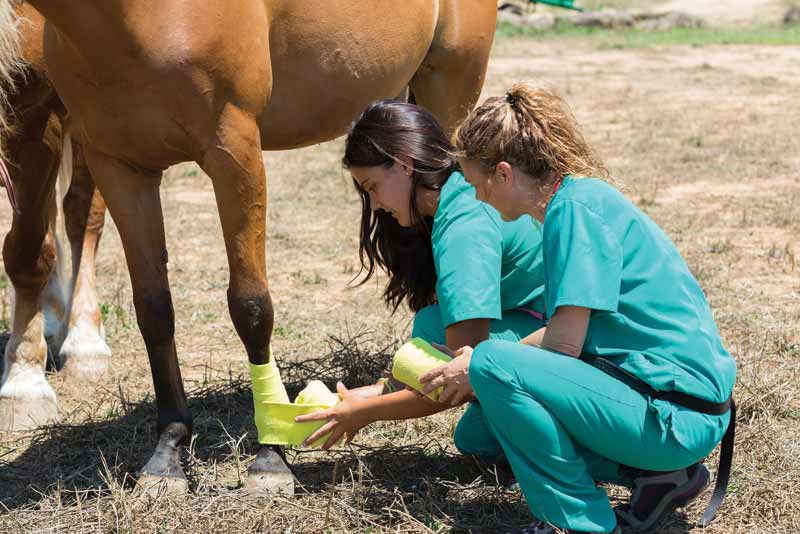 People have been putting things on wounds since, well, since wounds existed. The history books are full of wound treatments such as otter feces (reported in the sixth century Chinese Qimin Yaoshu), various herbal plasters, or urine (urine is sterile, and obviously would not be harmful to a wound). Often, wounds healed. While veterinary medicine knows much more about wounds now than in centuries past, the impulse to put something on them hasn’t changed a bit.

Wounds generally are divided into two types. Type 1 wounds—those created at surgery, or wounds that occur from such equine-assisted endeavors as running into feeders, fences, or nearly invisible screw heads—can be sutured. Type 2 wounds cannot be sutured for a variety of reasons.

Based on what we know about wound healing, if a type 1 wound has been cared for properly, sutured shut, and protected, applying liquid, ointment, or cream to the wound is unlikely to help and may, in fact, hurt. Wound research may even be contrary to what may be generally accepted practice. For example, human medicine studies have shown that wounds treated with a simple petrolatum-based ointment heal quicker than those treated with common topical antibiotic products, such as triple antibiotic ointment, or Neosporin. Further, indiscriminate use of antibiotics helps contribute to bacterial resistance. Sutured wounds generally don’t need anything done or applied to them, assuming no other problem exists, such as a foreign body, in which case a wound dressing is unlikely to be of use.

Type 2 wounds cannot be repaired with sutures for various reasons; for example, a wound found a day or two after it occurred and is infected. Infected wounds will dehisce—as such, primary wound repair is usually contraindicated. Sometimes, tissue loss in larger wounds precludes wound edges from being conjoined. This is a particular problem with the lower limbs, where the skin is pretty much shrink-wrapped onto the bones. Wound repair also may be complicated by the presence of foreign bodies (e.g., pieces of a stall door) or by excessive movement (e.g., when a wound occurs over a mobile joint, such as the posterior aspect of the metacarpophalangeal joint or the dorsal aspect of the tarsus).

You May Also Like  Beyond private practice: Serving in the public domain

There are dozens of products arranged in neat rows in tack and feed stores that can be applied to type 2 wounds. The mere fact that dozens of such treatments exist, most which can be obtained without a prescription, suggests that either none of them work very well or, even if one works (to some extent), the difference is insignificant.

In addition to not necessarily being helpful, some over-the-counter products are exceedingly expensive. For example, one popular wound treatment is more than 99 percent percent water, with a very small amount of hypochlorous acid (bleach), but sells for more than $30 per 4-ounce container.

Most of the products applied to type 2 wounds seem to work because they won’t get in the way of what the horse’s body wants to do anyway, which is heal. However, there are some compounds that have efficacy in the treatment of second intention wounds, based on wound healing research.

Ointments containing corticosteroids will inhibit the growth of granulation tissue (“proud flesh”) and can be very effective if used judiciously. However, they also have the potential to inhibit epithelialization, so carefully monitor wounds treated with such ointments. Combinations of sugar, usually mixed with a dilute povidone-iodine solution have antibacterial properties but are not known to inhibit granulation tissue.

Products that contain caustic chemicals burn the wound surface. Although freely available, they are not considered ideal wound treatments. In fact, one popular product contains mostly soda lime, which is more commonly used on stall floors to soak up urine. It’s been said that one should never put anything on a horse’s wound that one wouldn’t put in one’s own eye; frankly, that’s not a bad rule to follow.

Various wound care products claim that they are natural. “Natural” wound products usually include aloe, anti-oxidants, oils (tea tree oil is one that offers some antibacterial effect but also can really irritate the skin of some horses), antibacterials, and many other anti-anything-bad compounds. Honey is one such natural product that has some underlying support from scientific studies; however, its usefulness has absolutely nothing to do with its naturalness. Dressings made from equine amniotic membrane have been purported to be useful in wound treatment, but require significant processing and have a limited shelf life, which may limit their use, even if they are effective.

Given that all wounds try to heal themselves, sometimes in spite of what is done to them, the veterinarian’s role in wound care is often to try to reassure clients that things are going well while at the same time making sure that treatments applied are not overtly harmful. As long as things are going well, it’s usually best to leave well enough alone. On the other hand, if a wound isn’t healing well, it’s not likely because of the lack of a wound dressing; rather it’s likely due to an underlying problem, such as a foreign body, bony sequestrum, wound infection, or neoplasia (e.g., sarcoid). These wounds require deeper investigation by a veterinarian.

Dr. David W. Ramey is a Southern California equine practitioner who specializes in the care and treatment of pleasure horses. Visit his website at doctorramey.com.