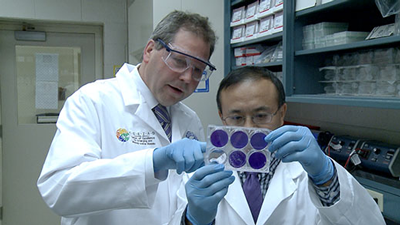 Kansas State University researchers have produced an avian influenza vaccine they think could be administered in water, eliminating the need to immunize poultry one at a time by hand. The vaccine, called NDV-H5Nx, also might be used on eggs to inoculate chicks before they hatch.

The discovery has the potential to save poultry producers billions of dollars in both time and inventory. An estimated 50 million U.S. chickens and turkeys died or were destroyed in 2015 during an outbreak of the H3N2 influenza strain.

The KSU vaccine, developed with the assistance of microbiologist Adolfo García-Sastre, Ph.D., of New York’s Icahn School of Medicine at Mount Sinai, was found to protect against the H5N1, H5N2 and H5N8 strains.

“The vaccine we produced is a live vaccine, which means it replicates in birds,” said Jürgen Richt, DVM, Ph.D., a Regents distinguished professor in KSU’s College of Veterinary Medicine.

“Because it’s live,” Dr. Richt said, “we believe that the vaccine could be sprayed into the air or put in the water supply so that when the chickens need a drink, they could be vaccinated. A poultry farm could vaccinate all of its birds in a single day because all living creatures need water to live.”

The mass inoculation of poultry would be a huge timesaver for producers.

“H5 vaccines currently on the market require that each chicken be injected by hand,” Kansas State reported in early January. “Many poultry operations have millions of birds, and it would take many hours to vaccinate every chicken.”

Further research is needed before the vaccine is ready for launch. The findings will be published in a scientific journal.