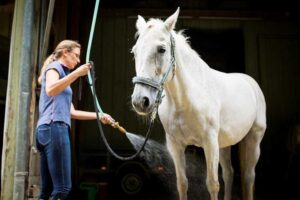 In the horse world, the common garden hose is virtually indispensable. A good, firm jet of cool water run vigorously over a fresh cut, a swollen limb, or a large deep wound at the very least makes a person feel as if something important is being done for the horse.

There are many undeniable advantages to using a garden hose for wound lavage.

1) A firm stream of water can certainly help remove surface debris that can contaminate a wound. Removal of debris in this way is effective, less time-consuming, and less tedious than removal of wound debris with a forceps or gauze sponge.

2) Using a garden hose has the advantage of simplicity. In general, something that is easy is also more likely to get done. From turning on the spicket to directing a water jet onto a leg, the mechanics of hosing a leg are easily mastered.

3) Lavaging a wound with tap water from a hose is reasonably safe. Understandably, many horses don’t like to have their wounds handled. While important, trying to remove debris from a lower limb wound on a horse that is inclined to kick, for example, can put the veterinarian at serious risk of harm. At least theoretically, for many horses, a lavage fluid that could be applied at a distance would be an attractive alternative to inspecting a wound up close.

However, given that water coming out of a hose is neither sterile nor isotonic, it is not unreasonable to wonder if garden hose water is actually a good option for wound lavage. Large volumes of hypotonic fluid could theoretically be harmful to tissue. That’s because with hypotonic solutions, there is a higher concentration of water outside the cells. As such, there is a net movement of water from outside to inside the cells, from regions of lower solute concentration to regions of higher solute concentration. At least theoretically, irrigating tissue with hypotonic solutions could cause it to become waterlogged, and thus impair wound healing. In addition, some may feel irrigating a wound with tap water would lead to microbial auto-contamination and bacterial resistance.

You May Also Like  Tummy troubles: Empirical treatment of acute vomiting

Perhaps surprisingly, in human medicine, there have been quite a number of studies investigating irrigating wounds with tap water in a number of settings. This may come as something of a surprise, given all the technical advances in medicine; however, researchers investigating wound healing have actually devoted a lot of time and attention to the use of tap water as a wound-irrigation fluid.

Human research also indicates that skin wound irrigation with tap water leads to a greater reduction of Gram-positive bacteria compared with 0.9 percent sodium chloride sterile solution. In that same study, no difference was shown between tap water and sterile saline in colonization of hemolytic bacteria, Gram-negative bacteria, and fungi.

Chronic wounds may also benefit from tap water wound irrigation. Chronic wounds of the horse’s limbs can be difficult and expensive to treat, and can cause a tremendous amount of anxiety on the part of the horse owner. One factor in the persistence of chronic wounds is the presence of bacterial biofilms within organized wound beds. Biofilm is an association of microorganisms in which microbial cells adhere to each other within a self-produced matrix of extracellular polymeric substance. Bacterial biofilm is infectious in nature and it can impede wound healing. However, mechanical debridement with water under pressure is an inexpensive and proven way to mechanically dislodge biofilm. In human medicine, daily lavage with tap water under mild pressure has resulted in stable granulating tissue beds in nonhealing wounds.

You May Also Like  Oral cancer: Not just for older pets

Even in dentistry, use of tap water for lavage has strong indications. In human dentistry, water is a very accessible, cost-effective irrigant without apparent side effects. In humans, irrigation of the surgical site of third molar removal with tap water using a curved syringe has been shown to be effective in reducing the risk of inflammatory complications and associated morbidity. As such, running a garden horse in a horse’s mouth may be a cost-effective and scientifically sound way to provide tissue irrigation, when warranted.

On a broader note, it is also interesting to consider that, in human medicine, there is limited evidence aggressive cleaning of wound surfaces actually does much to prevent wound infections. Not that removal of wound debris is unimportant, of course; however, excessive attention to cleaning wound surfaces prior to wound repair does not seem to result in better healing outcomes. Recommended irrigation pressure of around 13 psi can be easily obtained using a garden hose and is effective for cleansing wounds without causing tissue trauma.

Of course, with fresh wounds, the use of tap water from a garden hose should be applied after hemorrhage has stopped. Aggressive hosing of a bleeding wound can impair the clotting process. Let the bleeding stop, and then use the hose.

In summary, human research would indicate tap water seems to be every bit as good as sterile saline when it comes to lavaging a wound prior to repair. For equine veterinarians, tap water irrigation would seem to be a safe, effective, and inexpensive tool for use in wound management.

David W. Ramey, DVM, is a Southern California equine practitioner who specializes in the care and treatment of pleasure horses. Visit his website at doctorramey.com. Columnists’ opinions do not necessarily reflect those of Veterinary Practice News.