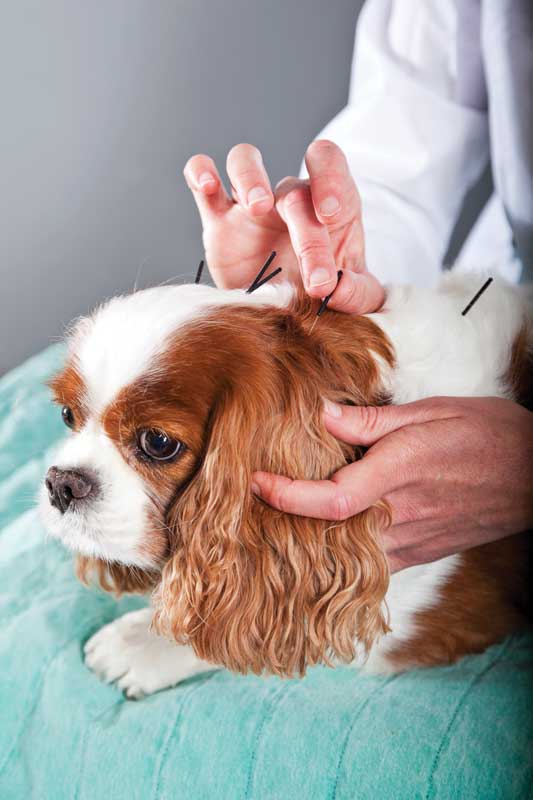 Acupuncture is one of the most well-known alternative therapies. While only five to 10 percent of Americans have had acupuncture, most people are familiar with the practice; surveys show many, including medical professionals, have a positive view of the treatment and its benefits.1–4

Like numerous therapies, acupuncture has been adapted for veterinary use from its origins in human medicine, and it appears to be growing in popularity among pet owners and veterinary professionals. For example, it is recommended in the American Animal Hospital Association (AAHA) pain control guidelines5 and included in the curricula and practice of a number of veterinary colleges. Training programs in veterinary acupuncture are common, and lectures on the subject are included in most mainstream veterinary continuing education conferences.

You may be surprised, then, to learn a sizable number of scientists and clinicians in both human and veterinary medicine remain unconvinced of acupuncture’s benefits.6–8 This is not for want of research. There are thousands of published clinical trials investigating acupuncture in humans, and several dozen veterinary trials have been reported. However, not all research studies produce equally reliable and convincing results, and acupuncture is particularly challenging to study in a rigorous scientific manner.

Though I am certified in veterinary medical acupuncture and use the method in practice, I remain skeptical about its value. Whatever benefits acupuncture may have can only be identified if the uncertainties about the practice and associated research are understood and if reliable, high-quality research evidence is generated. Therefore, I want to highlight here some problems with the theory and practice of acupuncture, and the research used to justify it to balance the misleading information put forward by some proponents and the positive, but often uninformed, view many have about it.

The roots of acupuncture

Acupuncturists often claim veterinary acupuncture is an ancient Chinese practice. This is somewhat misleading. Acupuncture certainly originated in China long ago. However, it was originally a bloodletting practice that evolved over time into the modern treatment using ultrafine needles.6,9,10 The current collection of ideas, methods, and therapies included under the label traditional Chinese medicine (TCM) is actually a mélange of competing folk medicine traditions collated and marketed by the Chinese government under Chairman Mao for largely political reasons.11,6

The theoretical roots of TCM are a mix of ideas from Daoism, Confucianism, Buddhism, and other religious and philosophical systems. The core concepts informing diagnosis and treatment involve balancing spiritual forces (e.g. Ch’i, Yin and Yang) and adjusting the strength and function of elements in the body corresponding to the elements that make up the universe (e.g. fire, which is associated with the heart, summer, bitter flavors, and the early afternoon, and wood, which is associated with the liver, sour flavors, springtime, and the early morning hours).6,9,10,12

Similar beliefs have underlain many prescientific systems of folk medicine. The theories of TCM resemble the philosophy of European humoral medicine, with its own bloodletting and herbal practices. Historical communication between cultures and universal features of human cognition have led to great similarity between folk medicine traditions in different cultural and historical settings.9

However, such beliefs are unproven and unfalsifiable, and they are not compatible with science-based medicine.13 Folk medicine has never been very effective, and the dramatic improvements in our health and life expectancy over the last two centuries have been achieved by abandoning such systems and replacing them with scientific evaluation of medical therapies. It is naïve and misguided to portray the mystical notions of TCM theory as a legitimate foundation for modern medical treatment.

You May Also Like  Test your veterinary knowledge with our Brain Teaser!

Of course, many acupuncturists claim TCM is merely a set of metaphors used to describe practices that have actually been studied and validated in conventional scientific ways. However, such claims are disingenuous. If there are sound physiologic rationales for how acupuncture is employed, why is there any need to learn a complex and imaginary set of explanations for disease and treatment in order to practice acupuncture?

Nearly all veterinary acupuncture organizations explicitly endorse the TCM approach. And regardless of the extensive scientific research done on acupuncture, most acupuncturists continue to think in terms of TCM concepts and still make diagnoses and plan their treatments according to this system. This is misleading to our clients and undermines rigorous scientific evaluation of acupuncture.

Acupuncture research is a complex field that is difficult to summarize, both briefly and accurately. From the basic science to clinical trials, the evidence is inconsistent in quality and results. Even the foundational task of identifying and defining acupuncture points has proven difficult.14–17 Various acupuncture traditions locate points quite differently. Some needle only in limited areas, such as the hand or the ear, while others use points widely distributed all over the body. Apart from the eyeballs and the genitals, there is hardly a spot anywhere that has not been claimed as an acupuncture point. And the features often cited to show such points are anatomically or functionally distinct also are widespread and found in many places not considered to be acupuncture points.

Despite extensive effort, a consistent set of anatomic or physiologic features that convincingly define the existence of acupuncture points has not been demonstrated. Further, many studies find the effects of needling to be as strong in sham locations used as controls for “true” acupuncture points.18–20 It is difficult to characterize and evaluate acupuncture as a coherent system for stimulating specific locations with predictable results if we cannot even prove these locations exist or that it matters where the needling is done.

There are thousands of clinical trials studying acupuncture in humans. Many claim positive results. Many also have severe methodological weaknesses. It is very difficult to create a “placebo” acupuncture intervention that fools patients, and it is impossible to create one that fools the acupuncturist. For this and other reasons, proving that real acupuncture is more effective than sham or placebo acupuncture has been difficult. Most positive results tend to be for outcomes such as pain, nausea, and subjective symptoms most susceptible to placebo effects, which undermines confidence in these results.

More than 60 systematic reviews of acupuncture research have been published by the Cochrane Collaboration, and none have concluded there is strong, consistent evidence for meaningful benefits.6,14,21,22 When study quality, risk of bias (both within studies and in the preferential publication of positive results), and other quality criteria are evaluated, much acupuncture research is not reliable. The highest-quality studies often find no difference between verum and sham acupuncture.

The veterinary clinical trial literature is smaller and even more unreliable. Reviews of the veterinary literature have failed to find convincing evidence of clinically significant benefits.23,24 In 2016, the American Board of Veterinary Specialties (ABVS) rejected the application of veterinary acupuncture organizations for medical specialty recognition because of the lack of a sufficient scientific basis for acupuncture. ABVS also recently rejected a similar petition from the American College of Veterinary Botanical Medicine (ACVBM), and most of its members and practices rely on the same unscientific TCM principles as acupuncture.

You May Also Like  The pee line: How to plan for and respond to leg lifters in your practice

A minority of acupuncturists disavow the folk medicine roots of the practice and approach it in a more rigorously scientific fashion. The former author of this column, Narda Robinson, DO, DVM, MS, FAAMA, is a leader of this effort, and it is her training course I completed in order to take as thorough and fair a look at acupuncture as I could. I believe using the principles, methods, and terminology of conventional science is the most promising way to evaluate acupuncture.

Unfortunately, there is still not consistent and reliable evidence to show the value of acupuncture in veterinary patients, regardless of the underlying theory. Studies frequently lack blinding and effective placebo controls, they often measure multiple outcomes and then dredge the data for statistically significant differences of questionable clinical relevance, and investigators inevitably interpret results as supportive of acupuncture even when they clearly are not.

For example, a recent study25 predicted acupuncture would increase gastric motility in dogs. A small difference in motility was seen between treatment and control interventions, though only at three of the 12 time points assessed. This difference was statistically significant, but it was actually in the opposite direction from that predicted, with motility being slower in the acupuncture group at these times. The most likely explanation for this finding is the hypothesis was wrong and the difference identified was not meaningful.

The authors, however, instead chose to interpret the findings “based on the underlying theories of acupuncture” and suggested further study and clinical applications may be appropriate because needling might “balance” physiologic systems, altering them in whichever direction is appropriate for restoring homeostasis in a given patient. This is simply the Daoist notion of spiritual balance from TCM couched in scientific terminology. It is an implausible interpretation of the data and shows how the religious concepts of TCM pervade the thinking of even ostensibly science-based acupuncture practitioners, and interfere with objective, useful generation and interpretation of scientific research evidence.

Most acupuncture treatment is still based on unscientific religious and philosophical principles. Despite extensive research over many decades, plausible scientific explanations for how traditional acupuncture might work have not been clearly validated. Clinical studies in humans have failed to find clear evidence of meaningful benefits for most conditions compared with sham interventions.

There is little high-quality clinical research on veterinary acupuncture, and the widespread belief it is an effective therapy is based mostly on anecdote and low-quality evidence. Better research evidence has been challenging to generate due to both the difficulty in creating an effective placebo comparator for acupuncture and the impact of entrenched bias and unscientific beliefs among acupuncturists evaluating the practice.

You May Also Like  The price is right: How preventive care pricing can boost your practice