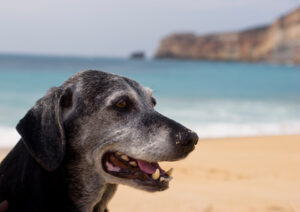 Ropesalazine, a drug candidate for Alzheimer’s disease (AD), has shown efficacy in a pilot clinical trial conducted for dogs with cognitive dysfunction syndrome (CDS), according to the drug’s manufacturer, South Korea-based GNT Pharma.

There currently is no cure for CDS, a progressive neurodegenerative disorder of senior dogs characterized by altered interaction with family, disorientation, sleep/wake cycle changes, increased house soiling, and activity change. It is accompanied by nerve cell death, amyloid plaques, and neurofibrillary tangles similar to AD, leading GNT Pharma scientists to design the pilot study to investigate whether Ropesalazine would alleviate signs of CDS, as well.

“The companion dogs failed to recognize their owners before the treatment,” said Jae Bong Moon, DVM, head of Irion Animal Hospital in Seoul, who led the study. “It was so amazing to see the dogs that wagged their tails for their owners and cuddled up to them within eight weeks of Ropesalazine treatment. [It] appeared to cure CDS.”

Ropesalazine was found to attenuate nerve cell death and amyloid plaques as well as inflammation and oxidative stress in transgenic AD mice models, and it reduced cognitive deficit in APP/PS1 AD mice at early, moderate, and late stages.

The company will move toward the next clinical study for approval of Ropesalazine as a drug for the treatment of CDS and plans to complete the clinical trial and launch the drug for treatment in companion animals in 2019.