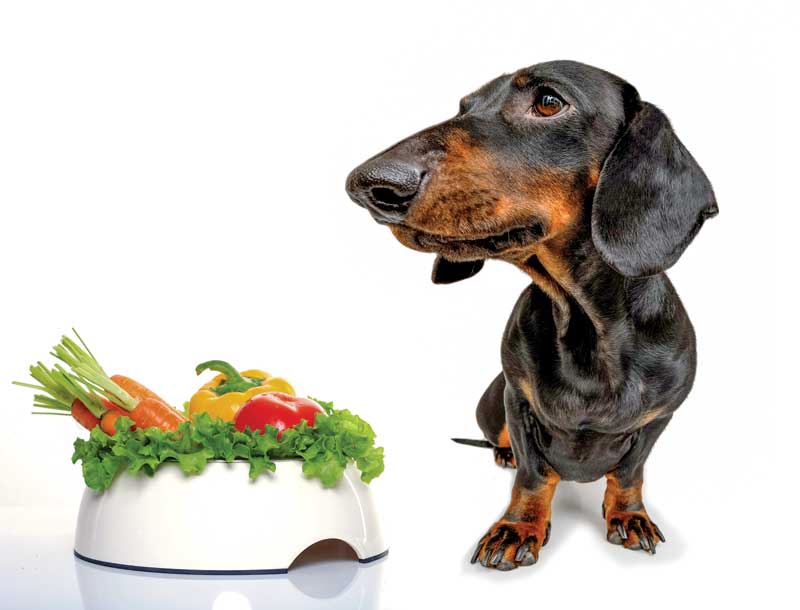 Pet owners frequently project their beliefs about human health onto their companion animals. Anxieties about purported harms from vaccines in children, for example, have spurred an anti-vaccination movement among veterinarians and pet owners.1–4 Beliefs in alternative medical therapies for people, such as herbal medicine and acupuncture, may motivate pet owners to seek such treatments for their animals. But perhaps the most common example of this phenomenon is the translation of dietary beliefs and fads from human nutrition to animal feeding practices.5

This projection of human dietary practices onto pets takes many forms. On the heels of a wave of hysteria about gluten and the health effects of grains in humans, we saw the rise in popularity of grain-free pet foods, which now make up close to half of commercial diets for dogs and cats.6 Organic ingredients are often marketed to pet owners as having health benefits based on the belief that this is true for people, despite the lack of real evidence for this in humans or in other animals.7 And among those who minimize or avoid animal products in their own diet, there is significant interest in feeding such vegetarian or vegan diets to their pets.8

People may avoid meat or other animal products in their diet for a variety of reasons, including concerns about food- animal welfare, beliefs about the health effects of plant-based and animal-based foods, and religious dietary restrictions. Surveys of pet owners indicate those who follow a vegan diet (eating no animal-based foods) or other vegetarian diets (limited consumption of some types of animal-based foods) sometimes feel discomfort at violating their own dietary rules in the feeding of their dogs and cats, especially if their own food choices are driven by religious or ethical concerns.8–11 They have a clear interest and motivation to feed vegetarian or vegan diets to their pets, but many do not because of concerns about the health effects of such diets on their pets.8

Beliefs about the nutritional requirements of dogs and cats are often based on the notion that whatever wild canids and felids eat must be a “natural,” and thus, a healthy diet for our pets. However, wild carnivores often suffer from malnutrition, parasitism, and other ills associated with their diet, so it is a mistake to imagine the diet available to them in the wild is perfectly suited to optimize their health.12–23 Natural history does have an influence on the nutritional necessities of a species, but these requirements are not always best met by feeding a diet identical to that eaten by the wild ancestors of modern animals. This is especially true for animals that have been domesticated, a process that induces significant changes to the anatomy and physiology of domestic species.

Dogs have been dramatically impacted by their long association with humans. Some of these changes are obvious, and their relevance to the concept of a “natural” diet like that of wolves and wild dogs is clear. It is unlikely a pack of feral pugs or French bulldogs will ever be seen running down and savaging an elk or antelope, and the idea this would be an optimal diet for them is clearly ridiculous. However, even breeds with a more typically canine anatomy have undergone changes in morphology and physiology reflecting their adaptation to human foods. From their dentition to their ability to digest starches and taste sweetness, dogs have been shaped by domestication, and they are well-suited to an omnivorous diet.24–27

In theory, then, dogs should be able to thrive on vegetarian or vegan diets. However, there have been few studies demonstrating this, and such diets can still be problematic. A vegan diet must be properly and carefully formulated to meet the nutritional needs of dogs, and there is less room for error than with diets containing animal ingredients. Numerous studies of commercial vegan and vegetarian pet foods have found formulation errors and inadequacies in essential nutrients.9,28 Some studies also have found mammalian DNA in such diets, suggesting they may not even be accurately labeled as vegetarian or vegan.29

Even diets that appear adequate on paper or in laboratory testing, however, may not support normal health under real-world conditions. Most commercial grain-free diets, for example, should be nutritionally complete for dogs, yet recent reports of cardiomyopathy in dogs eating such diets suggest a serious health risk for some individuals fed these diets.30–32 At present, there are only short-term studies and uncontrolled, low-quality case series evaluating the health of dogs fed vegan or vegetarian diets.9,33 Such limited evidence leaves significant uncertainty about the risks and benefits of these diets for domestic dogs.

Cats have been more lightly touched by domestication and artificial selection than dogs, and they are clearly still obligate carnivores.34,35 This does not mean they are healthiest when fed only raw birds and small mammals. In fact, the evidence indicates this is neither the safest nor healthiest diet for domestic cats.36,37 However, domestication has had limited effects on the physiology of cats, and their dietary requirements are unlikely to be effectively met by plant-only diets. The need for preformed vitamin A, taurine, and other specific amino acids lacking in plant-based foods, along with additional specific and known dietary requirements of cats, makes it unlikely that long-term feeding of vegan diets supports good health in this species.35,38

There are few studies evaluating the health effects of plant-based diets on cats. Some research on cats fed commercial vegetarian diets by their owners have found deficiencies in some nutrients in some cats, but the evidence is limited and of low quality, so no robust conclusions can be drawn.9,39–41

There is no evidence vegetarian diets have health benefits for dogs and cats, and no real reason to believe they should, based on the physiology and nutritional requirements of these species. Pet owners may choose to feed such diets due to their philosophical or religious beliefs, but veterinarians should make it clear that any potential health benefits of vegetarianism for humans likely do not apply to dogs and cats.

Shaped by domestication, dogs are omnivores that are able to eat both plant and animal foods, and in theory, they should be able to thrive on vegetarian or vegan diets. However, these diets must be carefully formulated, and many commercial vegetarian dog foods do not appear to be nutritionally adequate. There is also little reliable research evidence showing dogs can remain healthy when fed only a vegan diet. Given the unexpected health problems seen with theoretically adequate grain-free diets, we should be cautious about the potential risks of vegetarian formulations for dogs until there is better and more evidence showing their long-term health effects.

Cats are clearly obligate carnivores with nutritional requirements that are unlikely to be effectively met by vegan diets. Such diets offer only risks and no benefits for cats and should be avoided.