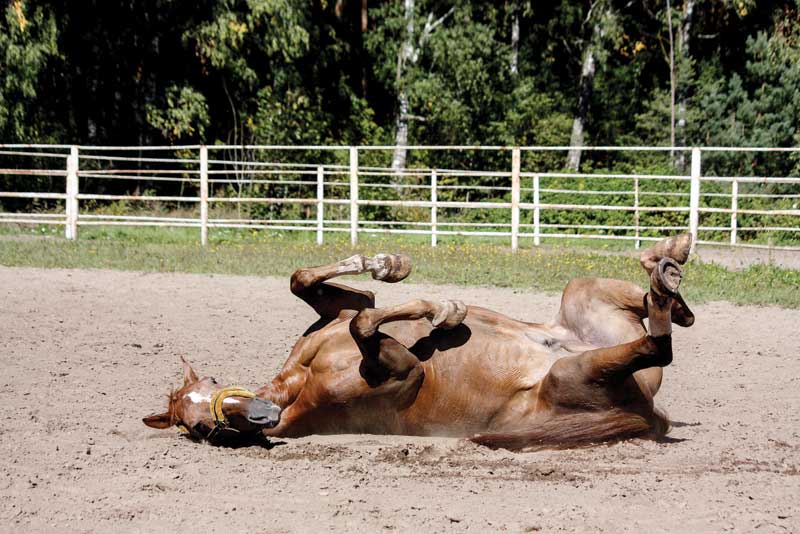 Available to veterinarians as detomidine hydrochloride, detomidine is a selective α-2 adrenoreceptor agonist used in horses as a sedative to assist in performance of a variety of clinical procedures. In addition, it is used as an analgesic in the treatment of abdominal pain (colic).

Detomidine activates α-2 catecholamine receptors, which reduces the production of excitatory neurotransmitters through a negative feedback response. The main therapeutic effects occur due to stimulation of α-2 receptors in the brain stem, resulting in a reduced sympathetic outflow from the central nervous system (CNS). Because of its effects on the sympathetic nervous system, detomidine can cause decreased heart rate, stroke volume, and blood pressure. Detomidine also acts as an antidiuretic.

The many uses of detomidine

Administered intravenously, intramuscularly, or orally, detomidine is a potent sedative, causing horses to quickly lower their heads and become less sensitive to stimuli. Effects can vary, depending on the dose and the individual animal. However, horses sedated with detomidine can still react quickly to stimuli, requiring a cautious approach when working around them.

Detomidine is also a potent analgesic—its effects have been demonstrated in a number of pain models. Of particular clinical importance is its use as an inhibitor of visceral pain. In this regard, detomidine is so effective at inhibiting visceral pain that care in administration to horses with colic is warranted, so as not to mask signs indicating a horse is a candidate for abdominal surgery. When detomidine is used to treat colic pain, the duration of effect can last as long as three hours. For the treatment of abdominal pain, studies have shown detomidine is more potent and longer-acting than the other α-2 agonist, xylazine.

In gel form, detomidine has a slower onset of action (approximately 40 minutes) and longer duration of action (90 to 180 minutes) than does the liquid form, whether administered intravenously or intramuscularly. Detomidine also has been administered for epidural analgesia.

A number of side effects of detomidine have been reported, such as bradycardia, a nonpathologic second-degree atrioventricular block, excess sweating, ataxia (especially at higher doses), and muscle tremors. Other effects include hyperglycemia, decreased motility of the gastrointestinal tract, and an increase in urination. Due to the more obvious side effects (e.g. sweating), clients whose horses have been given detomidine may express concern about whether the individual can eat once he’s back in his stall. Owners may also ask whether there be any problems after the medication wears off.

However, a reduction in small intestinal motility may lead to concerns that administration of detomidine may predispose the animal to post-procedural colic. Numerous studies have demonstrated the routine doses of detomidine have a profound suppressive effect on motility of the duodenum and the jejunum, both in vivo and in vitro.

Recently, in an attempt to address such concerns, a retrospective study looked at the fecal output and incidence of post-procedure colic of 246 horses that had received standing sedation with detomidine or general anesthesia with or without detomidine. The authors reviewed the records of all horses seen over a period of three years and three months, excluding animals under six months of age, and also excluding those admitted for colic and cesarean section.

The authors measured three variables in the study as indicators of potential postoperative complications: the time of first passage of feces, the total number of fecal piles, and the incidence of colic in the first 24 hours after a procedure. Fifty-seven horses underwent general anesthesia after being given detomidine, while 73 others had standing sedation with detomidine. The remaining 116 horses in the study underwent general anesthesia without detomidine and were used as controls. As might be expected, horses that received standing sedation with detomidine were generally given significantly higher doses of the medication than those that underwent general anesthesia. For these horses (who are otherwise awake), higher doses would commonly be needed to facilitate procedures that might be resisted, such as routine dentistry or wound repair.

Investigators followed the horses for 24 hours post-administration of detomidine. During that time, standing-sedated horses produced one less fecal pile (6.3 +/- 2.4) than control horses. In addition, horses that received the medication had a longer time to first defecation (7.1 +/- 4.2 hours) than did horses that underwent general anesthesia (with or without detomidine). However, while the standing horses receiving the higher doses did have observable differences in the 24 hours after the drug was administered, these occurrences appeared to have no clinical relevance. In particular, administration of detomidine did not appear to increase the incidence of colic.

Studied horses were followed for 24 hours after a procedure. During that time, seven of them colicked. However, whether or not the horses had colic was unrelated to administration of the drug. That is, there was no difference in colic occurrence between horses receiving detomidine and those that were not given the medication.

Based on the information from this study, equine veterinarians should feel more confident that administration of detomidine does not result in colic in the 24-hour period post-administration. While clients can be advised that some side effects (e.g. sweating) can be anticipated, veterinarians can reasonably assure clients their horses are unlikely to be at risk for more serious complications, such as colic. As such, detomidine can be used confidently for a variety of procedures, as directed by the veterinarian, and its use should not be expected to contribute to post-procedural colic.